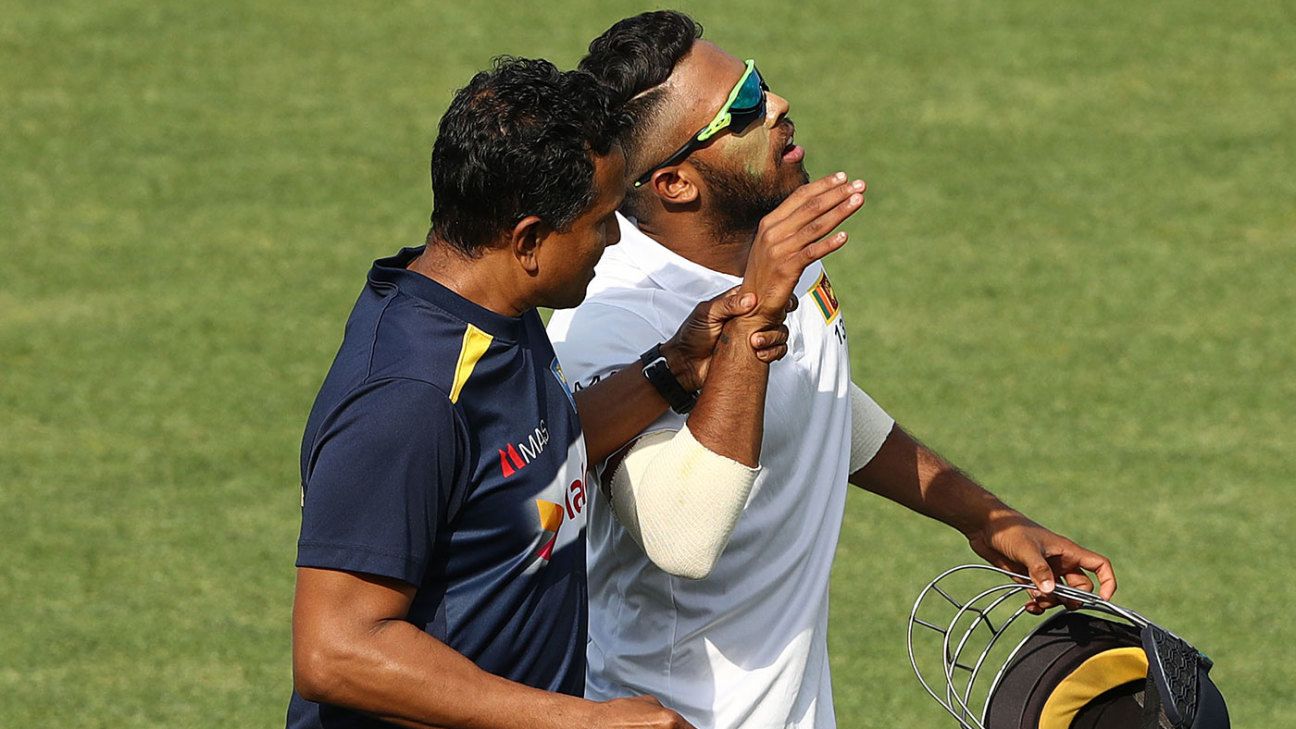 Given the pressure on Australia’s selectors at the moment, perhaps it wasn’t a surprise: the four batsmen picked in the Test squad against Sri Lanka made 40 runs between them and one overlooked batsman scored 157.

Joe Burns, Marnus Labuschagne and Matt Renshaw all fell for single-digit scores, while Will Pucovski made 23, but Kurtis Patterson, the New South Wales left-hander, shone with an attractive and increasingly aggressive hundred and 22-year-old local Jake Doran also cruised to a century in an unbroken stand of 218.

After a bright start to the three-day tour game, being played under lights with a pink ball, there were a number of concerns for Sri Lanka. The biggest will be around Kusal Mendis, a key man in a batting line-up missing Angelo Mathews, after he took a nasty blow on the hand while fielding at short leg in the middle session and immediately left the ground for treatment. Nuwan Pradeep had earlier left the field after just two overs holding the back of his left leg and Kasun Rajitha delivered eight no-balls in 16 overs. Patterson and Doran also took the spinners apart as they went for 137 in 27 overs.

It could be that the four Test-bound players in the Cricket Australia XI are vying for three places in Brisbane, and both they and the Australia selectors will hope for something more convincing in the second innings. While this has been billed as a ‘bat-off’, if this day had unfolded with the Test squad yet to be named, it would have been fascinating to see the decisions made.

Both teams wanted to bat – it was agreed each first innings would have 75 overs to ensure the teams encounter a variety of conditions – and there was some initial confusion from the Sri Lankans over whether they had an agreement to do so, but Burns also wanted first use so a toss took place.

He may have regretted that when he was one of three wickets in the opening 11 overs, which left the CA XI 3 for 25. Burns slashed a square drive to third slip, where Dhananjaya de Silva took an excellent catch, Labuschagne chopped on to his stumps trying to force one through the off side, and Renshaw was well taken low at first slip having earlier survived a huge appeal for caught behind when on 6.

Two of those wickets went to Dushmantha Chameera, who was the pick of the Sri Lanka attack, bowling at lively pace and finding some early movement. He added a third scalp shortly after the tea interval when Pucovski’s promising innings ended with a top-edged hook to short leg – a dismissal the Sri Lankans will have locked away should he make a debut in Brisbane.

Pucovski had played nicely until that point, bringing out a cracking straight drive that was an early contender for shot of the day, before Patterson got going, but his dismissal will have done nothing to quieten the talk about a potential weakness against the short ball as he had previously been struck by bouncers.

He wasn’t alone in falling to the short ball, with Jason Sangha going to the same way when he hooked Rajitha to long-leg, which left the CA XI on 5 for 98.

By then, Patterson, who shook off an early blow to the helmet, was already ticking along nicely with some especially eye-catching strokes through the off side. His name has regularly been mentioned in debates around the Test side – he has 428 runs at 47.55 in the Sheffield Shield this season – but his conversion rate of six hundreds in 103 first-class innings has been held against him. In this innings, however, he looked a class apart with a lot of time to play his shots.

He brought up his century from 151 balls against the first delivery after dinner, and then unfurled a full range of strokes against a softening pink ball and some ineffective spin. He went from 100 to 150 in 52 deliveries.

Doran, the 22-year-old Tasmania batsman who is keeping in this game despite being the state’s third choice behind Tim Paine and Matthew Wade, played a very compact innings that included 12 boundaries – three of them coming in four balls against Rajitha – and had time to scamper to his century, which was brought up with a crisp straight drive off the same bowler four balls before the 75 overs of the innings were completed.

Faced with 13 overs as the lights took full effect, the Sri Lankan openers did well to get through although Dimuth Karunaratne survived a huge appeal for caught behind first ball.