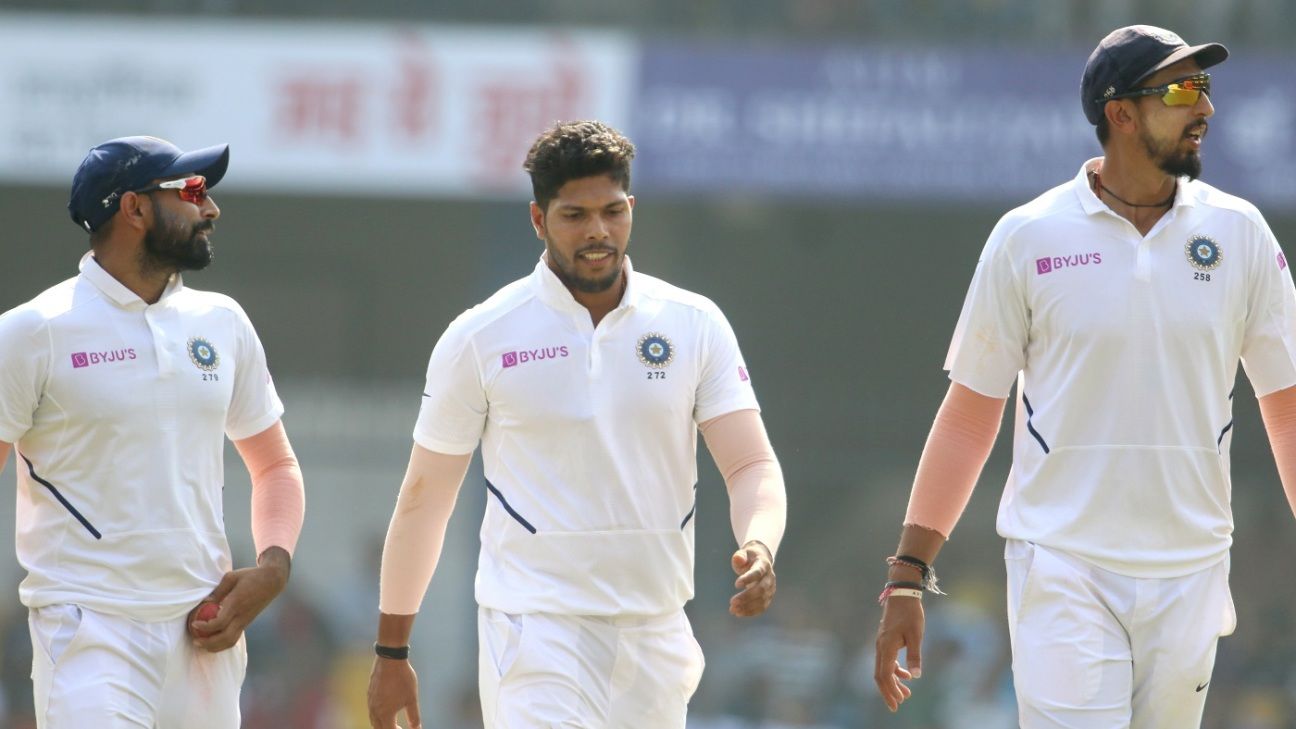 The giant strides made by India in the pace-bowling department in recent years were evident in their series sweep of South Africa, with the trio of Mohammed Shami, Umesh Yadav and Ishant Sharma out-bowling their South African counterparts by a distance. The three fast bowlers took the majority of wickets in India’s innings and 130-run victory against Bangladesh in the Indore Test too, accounting for 14 of the 19 wickets Bangladesh lost to bowlers. Speaking to Harsha Bhogle for host broadcaster Star Sports after the game, the pacers indulged in light-hearted banter with each other, with Shami suggesting biryani was behind his success, Ishant mock-complaining about how no one treated him like a “senior”, and Umesh talking with glee about being given the license to do exactly as he wanted when batting. Excerpts here:

You (Shami) bowl very well in the first innings of course, but this ‘second innings Shami’ nickname that you have got, you’re the best in the world in the second innings. What’s the secret behind that?
Shami: There is no secret. We keep trying to pump each other up, and keep pushing each other, all the fast bowlers. It’s a difficult job, but we push each other, we joke with each other, that feels very nice. When we are on the ground together, we never feel like we aren’t enjoying others’ success. That’s special. There’s lots of things to say, but…

What are the things you can’t say? You (Ishant) are a senior after all!
Ishant: No, they don’t treat me like a senior at all (laughter). There’s no senior-junior here. But like Shami said, we enjoy each others’ success a lot. Yes, there’s healthy competition in the team, which should be there, because that’s when your performance improves. But at the same time, if you enjoy each others’ success, and whatever you spot of the others’ bowling you go and tell them, things become much easier as a team.

You’ve played almost 100 Tests. Is this your best phase as a bowler?
Ishant: It’s difficult to say. I’ve been playing for a long time. I’m only 31, but the body sometimes feels old (chuckles), after bowling so much. But yes, the way I’m getting wickets, and bowling in good areas, I’m bowling in different ways, so I’m enjoying it quite a lot.

Umesh: It’s in the genes and handed down by my family. Whatever I’ve learned from my father in childhood, he made me run around a lot and do lots of things, which is why I’ve reached where I am today. I try to maintain it.

You guys have changed the face of Indian bowling from the time when new-ball bowlers would bowl a couple of overs and then be taken off…
Umesh: Yes, earlier pacers would bowl only a few overs and then the spinners would come on with turning tracks. But the way all the bowlers are bowling together, we know what our strong point is, what our areas are and we plan that way. We try, for the first 10-15 overs or how much ever we bowl, if we can each take a wicket, then it’ll be better for our spinners. And our confidence is high since we’ll get to bowl again. If we take wickets, we’ll get more bowling, which is good for us.

“The batting coach and captain tell me to just enjoy batting. Lower down, if we can make 25-30 runs, it’s good for the team. If four of us can contribute 100 runs, it’ll be great for the team”

Umesh Yadav on his batting

He (Umesh) is bowling well, but what about his batting? The boundaries seem smaller now.

Shami: His power makes the boundaries in India seem small. The team has given him the full freedom – ‘Play the way you want’. When we go to bat, we don’t have any restrictions about what we have to do. If you are a batsman, you will naturally try to stay at the crease for as long as you can and score as many runs for the team as possible. That is very good, but for him, he has the freedom that he doesn’t need to stay at the crease or block, he just needs to hit. He can do whatever he wants!

We generally show highlights of your bowling, but we were showing your sixes package on air just now…
Umesh: Actually it’s like what Shami said. The batting coach and captain tell me to just enjoy batting. Lower down, if we can make 25-30 runs, it’s good for the team. If four of us can contribute 100 runs, it’ll be great for the team. But in the last match in Ranchi, against South Africa, the captain told me that we need to score runs quickly. He told me to go and do whatever I could. I just tried, and for anyone, if you start middling the ball, your confidence soars. I just tried to carry that forward. I am trying to do whatever my team needs. There have been times, like in England, where I had to stay at the crease and I did that too. But it’s my time to enjoy now, so I’m enjoying.

Excited about the pink-ball Test? They say it moves a lot, but how much more will you make the ball do?
Ishant: That Shami has to say, because when he played with the pink ball, he got five wickets in 11 overs. (Referring to a CAB Super League final in June 2016 between Mohun Bagan and Bhowanipore, which was played at Eden Gardens. Shami took 5 for 42 in 13.4 overs in the first innings, for Mohun Bagan, in the first pink-ball match played in India.)

Shami: Well… the best thing that is there in my mind is that from the side of the captain and coaches I’ve been given complete freedom.

Ishant: That way, even we have the freedom!

Shami: And the biggest thing is that I’m bowling with you guys. I don’t even need to think too much. I just need to focus on the one thing you need to do in Tests: put it in a good area. I do just that and you guys make it much easier for me, so there’s no pressure on me.

Ishant: We have asked you something else, you’re giving a different answer! (laughter) We are saying that the areas you’re bowling in, we’re bowling in them too. But when you hit the pads it’s in line with the stumps, and when we hit the pads, it’s missing the stumps. Why does this happen!

Shami: Well people say it’s biryani ka kamaal [It’s down to the wonders of eating biryani]. No, it doesn’t happen like that of course. But it’s just luck and God’s grace. One thing is that the line and length I’m focusing on is being executed. I’m getting success from that so I try to repeat that.