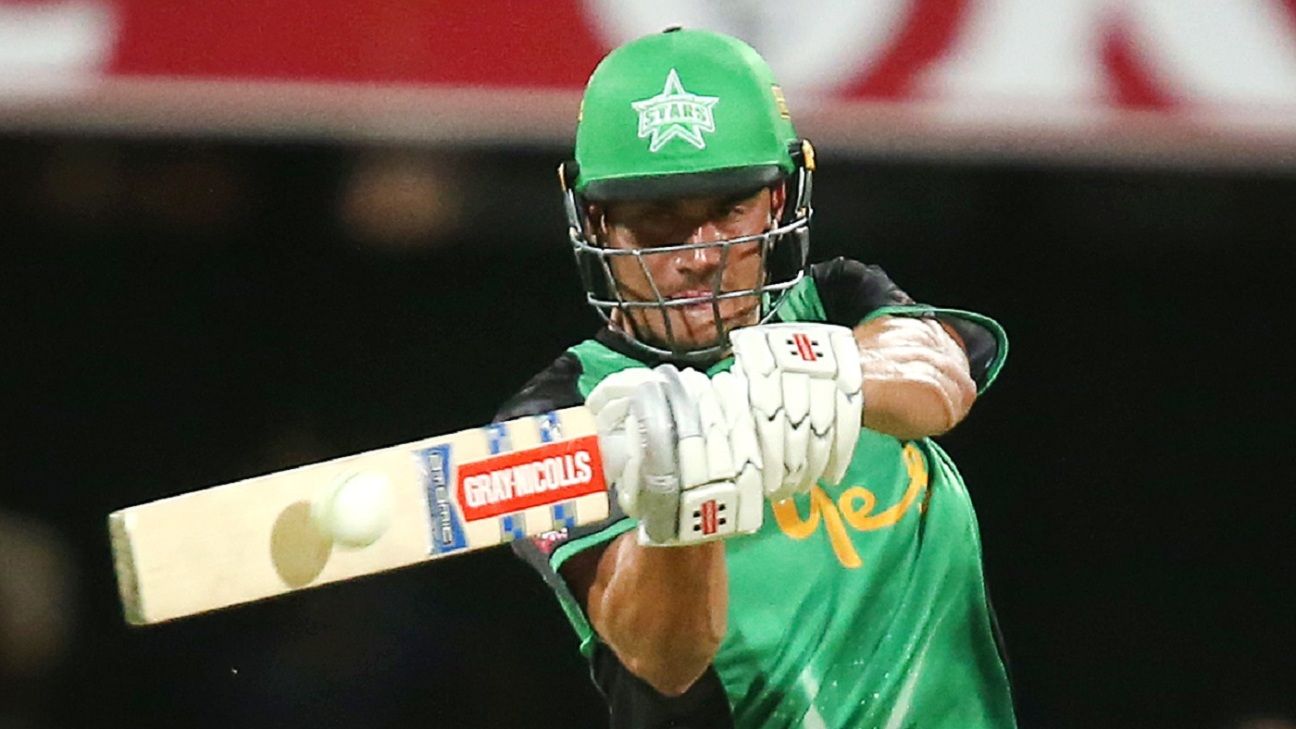 Allrounder Marcus Stoinis is committed to opening the batting for the Melbourne Stars in the Big Bash League again this season, despite the fact that the middle order appears his best avenue back into the Australian T20 side.

Stoinis was left out of Australia’s T20 squad in the two series against Sri Lanka and Pakistan in October and November. The selectors opted not to pick a seam-bowling allrounder in the squad, using Ashton Agar at No.7 as a spin-bowling allrounder.

The return of David Warner also changed the dynamic in the top order. Stoinis had opened the batting in Australia’s previous two T20 internationals in India in February after an outstanding BBL last season, when he opened for the Stars and made 533 runs at 53.30 with a strike rate of 130.63, including four half-centuries.

The combination of Warner and Aaron Finch looks a lock for Australia at the 2020 T20 World Cup.

But Stoinis is set to open again for the Stars alongside Nic Maddinson after the pair faced the new ball in the Stars’ first practice match against the Melbourne Renegades at the Junction Oval in Melbourne on Monday.

He said doing what’s best for the Stars is his first priority.

“I can’t see myself changing too much from there just because you want to do right by your franchise,” Stoinis said. “We want to win games and I want to do what’s best for the team and then you just go from there I guess.”

Stoinis said the reasons why he was omitted from the T20 squad had been communicated to him clearly by chairman of selectors Trevor Hohns. He hasn’t had a discussion with either Hohns or coach Justin Langer about his place in the pecking order for the T20 World Cup next year but is confident he can play any role required.

“No, I haven’t spoken to them about it,” Stoinis said. “I’m sure I’ll get a call from JL [Langer] or someone to speak about that side of things maybe. But for me, look, I’ve batted (Nos.) 1, 2, 3, 4, 5, 6, I’ve bowled in the powerplay, I’ve bowled at the death, I’ve bowled in the middle, I’ve fielded in the slips, I’ve fielded on the boundary, I’ve fielded at cover. Something I pride myself on is being adaptable. I’ve played a lot of cricket in multiple positions so I should be okay.”

It is not beyond the realms of possibility that Stoinis could get a call about the Test side given the injury to Josh Hazlewood in Perth against New Zealand. Australia played an allrounder in the last Ashes Test at The Oval and Langer floated the idea of playing five bowlers on Boxing Day if the surface was flat.

Stoinis was called up to the Test squad during his stunning run of form in the BBL last year but was eventually named 12th man for the Canberra Test against Sri Lanka.

His Sheffield Shield form has been very consistent this season but is missing some big scores. He’s made four half-centuries in nine innings completed innings (the 10th was abandoned at the MCG due to a dangerous pitch) with a highest score of 79 when he was run out against South Australia. He also has 12 wickets at 27.25 having taken wickets in all five games that he bowled in.

“Test cricket is still my goal,” Stoinis said. “That’s where I want to play. I’ve played a lot of Shield cricket this year, the most I’ve played for 3-4 seasons and it’s good to remember how to block the ball and spend some time in the middle.”

For now, he’s fully focussed on the Stars. The disappointment of last year’s final is a distant memory with a new coach and some new signings. Stoinis said the transition of former Stars captain David Hussey into the head coaching job has been seamless.

“I think the key thing for Huss is he hasn’t brought too much new stuff,” Stoinis said. “He was around the group for so long as a player, he was captain, he knows Glenn [Maxwell] so well, he knows what makes the boys tick. He hasn’t tried to rattle the cage or anything like that, he’s just tried to create a stable environment, super relaxed, take any pressure off the players and let us perform.”

The Stars lost their opening practice match after an assault from Renegades pair Sam Harper and Shaun Marsh on a flat pitch at the Junction. But Dale Steyn’s arrival on Tuesday night from South Africa, along with the addition of Nathan Coulter-Nile brings a fresh new dynamic to the attack that already features two high-class legspinners in Adam Zampa and Sandeep Lamichhane.

“It’s a big change for us I reckon,” Stoinis said. “We’ve got some real ball speed, [Daniel] Worrall is fresh as well so he bowls nice and quick. And that will complement our spinners as well. I think with the big square boundaries at the MCG and our good spinners and good quicks, we’re going to be hard to beat.”