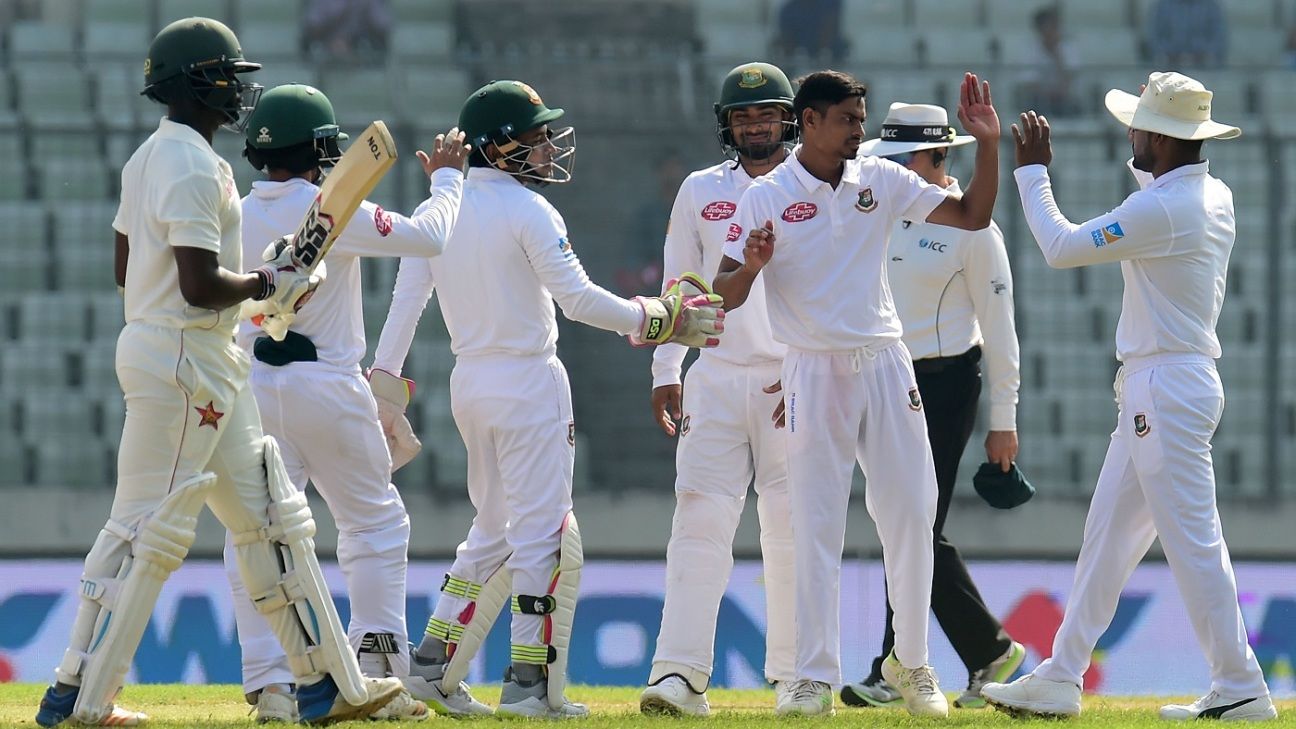 Zimbabwe made a firm riposte with the bat before Bangladesh’s spinners seized the initiative on the third day in Dhaka. Brendan Taylor reached his fifth Test hundred to alongside a career-best 83 from Peter Moor and a fifty from Brian Chari at the top of the innings. But Taijul Islam‘s third consecutive five-wicket haul meant that Zimbabwe were bowled out for 304, 19 runs short of the follow-on target, just before the scheduled close.

Zimbabwe had managed to stay afloat for much of the day, but Ariful Haque’s medium pace snapped a 139-run stand for the sixth wicket between Taylor and Moor late in the afternoon. Mehidy Hasan then took two wickets in three balls, before Taijul wrapped up the innings with his fifth wicket.

The late strikes took some of the gloss off what had been a gritty effort from Zimbabwe. Coming together at 131 for 5, Taylor and Moor had plenty to do, but they showed the temperament to be firm in defence and pick the right ball to hit in a stand that defied Bangladesh’s attack for almost 36 overs. After settling in, Taylor had started brightly against the spinners, showing inventiveness in his sweeps, nonchalance in his lofted strokes, and an exquisite timing in his drives against pace and spin alike.

He brought up a 107-ball fifty in the 68th over of the innings, while Moor showed the sort of form that was crucial to Zimbabwe’s success in the first Test. Moor lofted Mehidy over extra cover to bring up his own fifty in the 80th over, and also enjoyed a little luck, chipping a slower ball from Mustafizur Rahman to cover only for substitute fielder Nazmul Islam to spill the difficult chance when he had scored 75. Taylor was also dropped on 94 by Mushfiqur Rahim as Bangladesh’s intensity slipped a little after a long day in the field.

Looking for a partnership breaker as Zimbabwe continued to tick along confidently against the second new ball, Mahmudullah turned to Ariful, who found prodigious inswing to trap Moor in front for 83 just before drinks. At the other end, Taylor lifted Taijul inside out over extra cover to go to 99 and then smeared him across the line to midwicket to bring up his first Test hundred away from home.

While he couldn’t get past Taylor with the ball, Taijul played a vital part in his eventual dismissal for 110, pulling off a spectacular catch at deep square leg as Taylor played one sweep too many at Mehidy. That opened the door for Bangladesh, and Brandon Mavuta edged the second ball he faced from Mehidy to Ariful at slip as Zimbabwe stumbled to 290 for 8.

Kyle Jarvis survived a couple of close calls, with two tough chances being put down at short leg as Zimbabwe edged closer to the follow-on target, but Bangladesh ensured that the decision over who gets to bat next in this Test would remain theirs when Taijul had Regis Chakabva well caught in the same position with a handful of overs remaining in the day, with Tendai Chatara unable to bat due to the muscle tear he picked up in the field. The home side may well make Zimbabwe wait until tomorrow morning to find out whether they will enforce the follow on.

Taijul enjoyed a productive outing in the field, removing nightwatchman Donald Tiripano via an outside edge to Mehidy at slip in the 11th over of the day. He also accounted for Sean Williams and Sikandar Raza, both bowled exposing their stumps in defence, but he was frustrated by some obdurate batting, first by Chari and Taylor, and then by Taylor and Moor.

Chari endured a thorough working over by Khaled Ahmed, twice being struck on the grille with enough severity to knock the protective neck guard off the back of his helmet and raise a swollen bump on his left cheek. Chari went on the attack in response to the barrage, collecting three lofted boundaries in a single over from Taijul to go to fifty in the 19th over of the day.

His dismissal to a delivery from Mehidy that popped up off the pad and grazed the glove to be caught by Mominul Haque at short leg, followed by Taijul’s strikes to get rid of Williams and Raza, tilted the balance back in Bangladesh’s favour. On a see-sawing day, Taylor and Moor’s rearguard held the home side at bay for some time, but at stumps Bangladesh were firmly in charge.