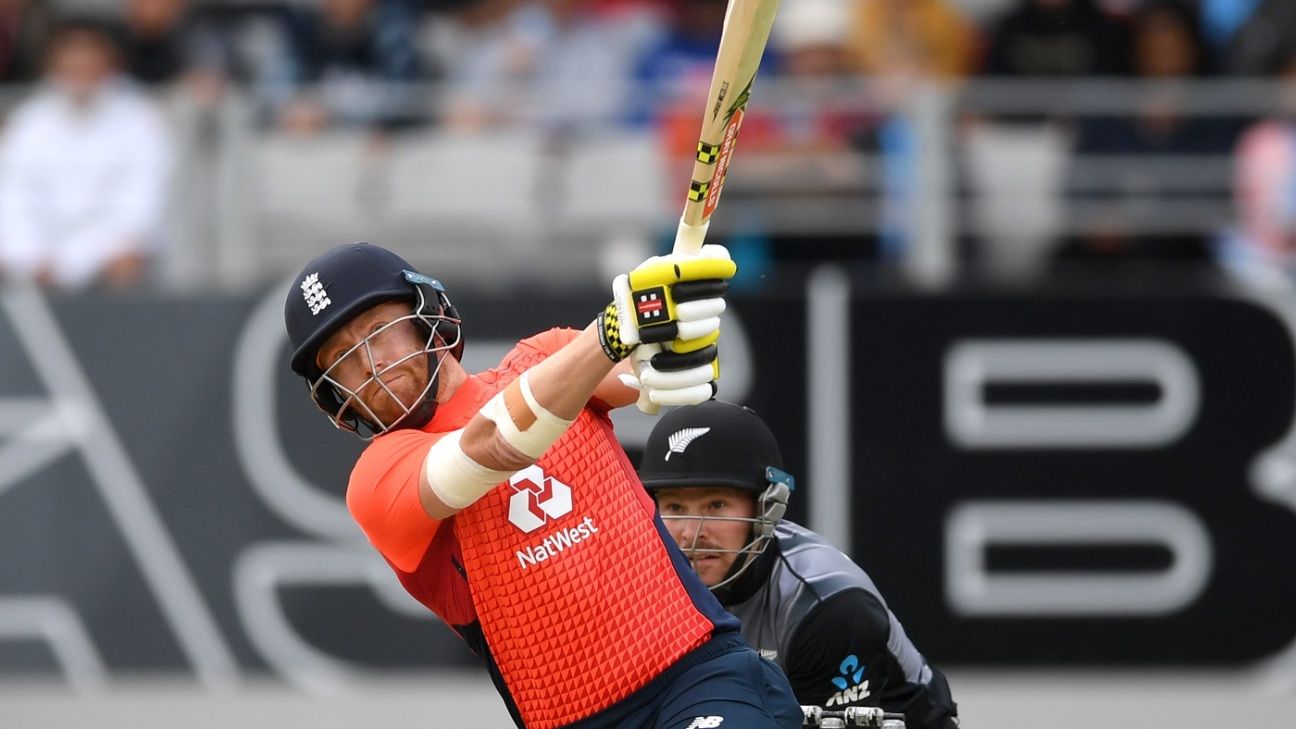 Jonny Bairstow was a T10 record-breaker last year, as he hit what was at the time the format’s highest-ever score with a 24-ball 84, and he suggested that the experience of playing an abbreviated version of T20 helped England’s chances in the rain-reduced fifth T20I at Auckland.

Six of England’s playing XI appeared at the tournament last year, and Bairstow suggested that the adjustments they had made for that competition stood his team-mates in good stead for an 11-overs-a-side game.

“It was pretty imposing to try and chase down 150 [147],” he told Sky Sports, “but a lot of the guys played in the T10 last year and said, ‘look, we’re not far off here – if we can within striking distance with the small boundaries, we’ve got a chance’.”

“The shorter the game the harder the side can go,” agreed New Zealand captain Tim Southee. “They just kept coming hard and it would have been nice to have one more run there somewhere but it wasn’t to be.”

Bairstow himself struck five sixes and two fours in a belligerent innings of 47 off 18 balls, and said that he was aware his contributions to date in the series hadn’t matched the high standards he sets himself.

“I don’t feel like I’ve potentially scored as many as I wanted during the series,” he said. “So to contribute in a shortened game – obviously the pitch here is quite favourable for the batters [but] to get some runs was pleasing.”

As they were in the 50-over World Cup final in July, New Zealand and England were impossible to separate after their innings, and found themselves playing another Super Over to decide the series.

“We don’t want to keep this happening, I don’t think,” Bairstow said. “I don’t think anyone wants to keep that going but it just shows how close the sides are and how close it’s been throughout the series and it sets up what’s going to be a fantastic Test series as well.”

England captain Eoin Morgan, who hit 17 off 7 balls in the game itself before adding nine from three balls in the Super Over, said that it was a useful learning experience for his side to play in high-pressure scenarios.

“I don’t think both sides mind a bit of extra time or a Super Over,” he said. “It makes for great entertainment.

“It’s obviously brilliant to play in big-pressure situations, but we’re glad we came out the other side of it.

“I’m surprised we got any sort of a game in today with the weather that was around, but it’s always nice to play here. We chopped and changed a little bit, and the guys coming in did a really good job.

“The Black Caps played well again, bowled really well, and there was nothing between the sides for the 11-over game. And then, the Super Over – I thought the standout was Chris Jordan [who bowled England’s over and conceded only eight], a guy who’s extremely calm under pressure and delivers.”