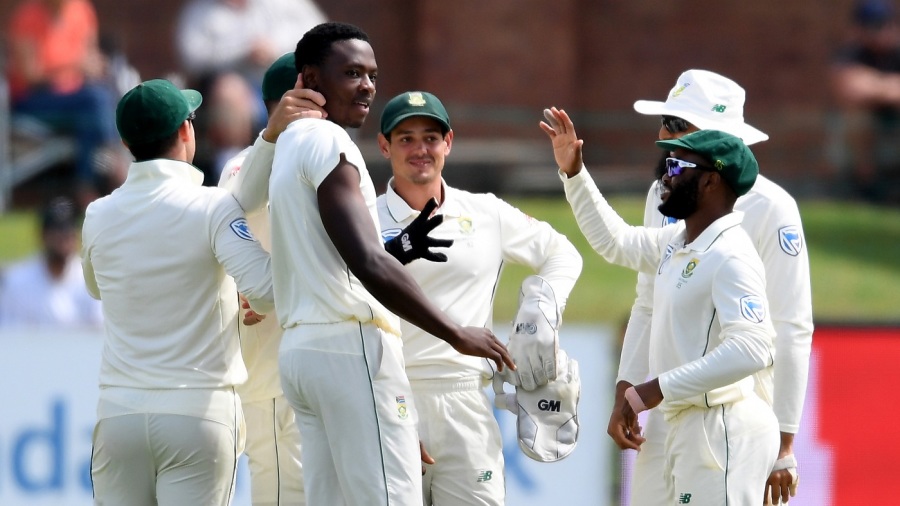 Kagiso Rabada and Duanne Olivier cut through Sri Lanka’s middle order and earned South Africa a 68-run first-innings lead in the second Test at St George’s Park. Resuming from an overnight 60 for 3, Sri Lanka subsided to 154, about half an hour before lunch. That Sri Lanka reached three figures was down to sparkling cameos from first-Test hero Kusal Perera (20 off 15 balls) and Niroshan Dickwella (42 off 36 balls).

Lasith Embuldeniya, who underwent surgery after dislocating his thumb on Thursday, did not come out to bat. Vishwa Fernando got rid of Dean Elgar for the second time in the match to ensure lunch would be a bit more palatable for Sri Lanka. South Africa were 10 for 1 at the break.

Olivier had laid down the marker when he struck Lahiru Thirimanne on his shoulder off the first ball of the day. In his next over, he found extra bounce from a length and had Thirimanne chipping a return catch for 29. Since his return to the Test side, Thirimanne has passed 20 five times in seven attempts, but hasn’t topped 41. Story of his career?

Olivier continued to pound the deck and greeted Kusal Perera to the middle with a short ball that pinged his mid-riff. Rabada then swooped into the action when he removed Rajitha, the nightwatchman, for 1 in the next over.

Sri Lanka were reduced to 66 for 5, but that did not stop them from throwing their bats at the ball. Kusal unleashed a devil-may-care slap over cover-point off Olivier and proceeded to launch Rabada onto the roof over extra-cover. His innings, though, was short and sweet as Rabada tightened up to have him nicking off.

Dickwella then unfurled his trademark scoops and ramps, despite South Africa posting a fine third man, to haul his side past 150. He caught everybody’s attention when he gave himself room and lifted an off-stump ball from Dale Steyn over Hashim Amla at slip for four. Dhananjaya de Silva hung around with Dickwella in a 31-run stand for seventh wicket before he became allrounder Wiaan Mulder’s maiden Test wicket.

Keshav Maharaj, the left-arm spinner, then entered the wickets column when he dismissed Suranga Lakmal for 7. Having lived by the sword, Dickwella died by it, spooning a ramp to gully and giving Rabada his fourth wicket.