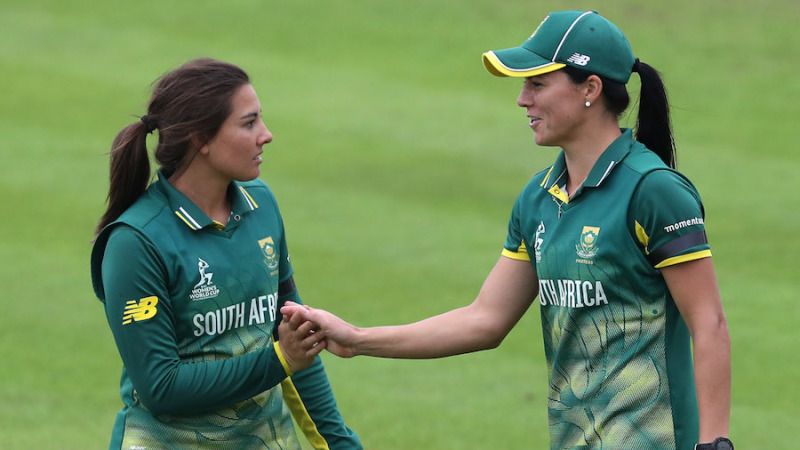 South Africa cruised to a 3-0 sweep in their T20I series against Sri Lanka with a 39-run win in the third match at SuperSport Park in Centurion. The hosts put in a complete performance with both bat and ball, running to 163 for 5 – the highest total of the series – after being put in to bat by Sri Lanka, and then sharing the wickets around with Sune Luus‘ all-round efforts winning her back-to-back Player-of-the-Match awards.

Consistency in batting was a primary goal for South Africa coming into this series, and the several changes that have rung through their top order resulted in the kind of performance coach Hilton Moreeng has been looking for. Four of the top five passed 20, and all kept their strike rates well above 100 as the runs flowed.

Tazmin Brits and captain Dane van Niekerk kicked things off with a rapid 58-run opening stand, Brits peppering the cover boundary in a 29-ball 36 before she was caught off Inoka Ranaweera’s left-arm spin at the end of the eighth over. Van Niekerk swiped three fours and one majestic inside-out six over extra-cover before she had to leave the field with a stomach ailment halfway through the innings.

Lara Goodall and Marizanne Kapp kept up the run rate in her absence, raising the hundred in the 13th over. Kapp fell in the pursuit of quick runs, but Luus entered the fray with two slog-swept sixes as South Africa raced past 150. Luus and van Niekerk – back in the middle having recovered from her symptoms – fell off consecutive deliveries in the final over but Faye Tunnicliffe swiped a boundary from the penultimate delivery to boost the score beyond 160.

Set a daunting target, Sri Lanka’s chase got off to a disastrous start when Kapp bowled Prasadani Weerakkody with the second ball of the chase. Sri Lanka did not reach the boundary until Chamari Atapattu slashed a top-edge over the slips off Shabnim Ismail at the end of the fourth over. In a brief flurry, Atapattu and Hasini Perera picked up four boundaries in six balls thereafter, but the introduction of Luus’ legspin slowed things down again, while Nadine de Klerk struck in her very first over to bowl Perera for 13.

Atapattu took a brace of boundaries off de Klerk and Luus, but the required rate was rising all the time and when Ismail returned to clean-bowl Atapattu with the first ball of her third over, Sri Lanka had lost their captain and almost any hope of winning the game.

De Klerk was on a hat-trick when she removed Imalka Mendis and Nilakshi de Silva with successive deliveries in the 17th over, by which time the required rate had rocketed to almost 20. Kavisha Dilhari survived the hat-trick ball, and Shashikala Siriwardene once again exhibited some fierce strokeplay – including a remarkable checked drive, inside-out over cover – but South Africa’s total was never in any real danger.