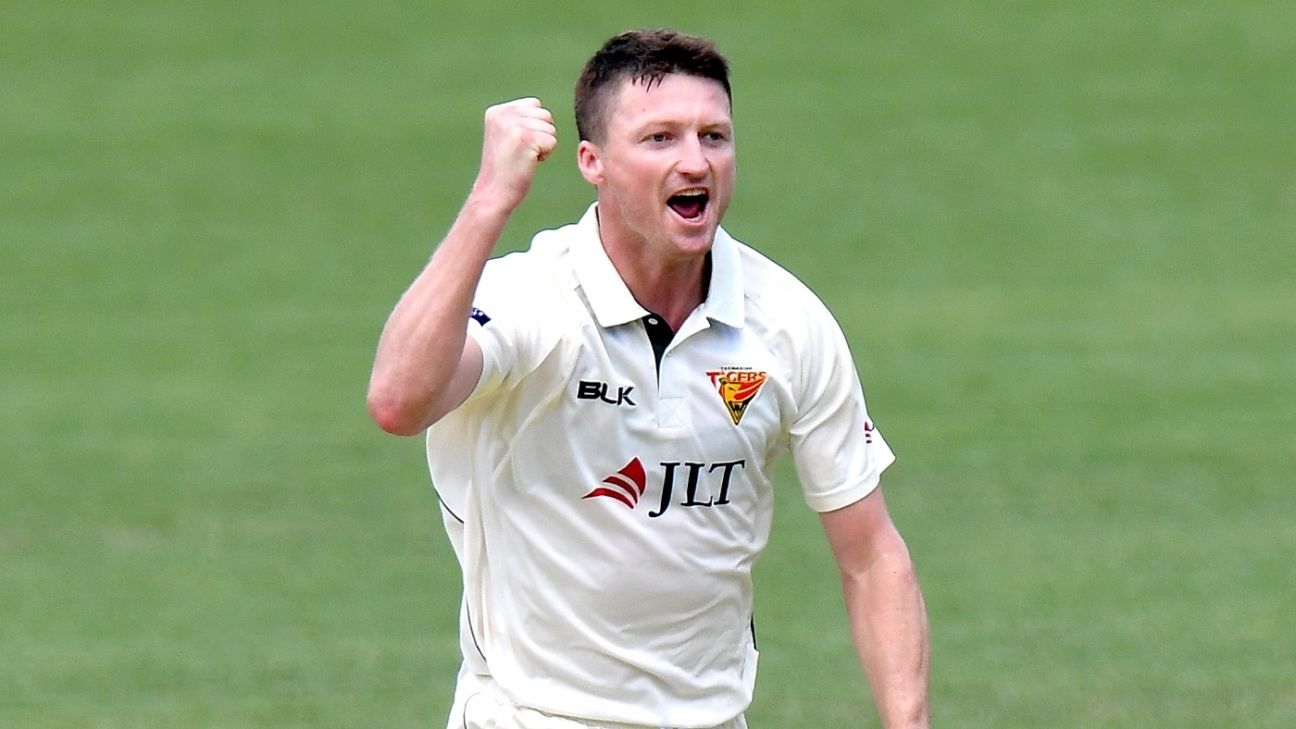 Watch Jackson Bird bowl in Australia and most swiftly reach a similar conclusion: perfect for England. Tall, accurate and generating bounce and movement both ways, he has long been among the most consistent performers down under, as demonstrated by his recurring presence around the fringes of the Test team in a decidedly strong era for pacemen.

Take Bird some 20 hours’ flying time to the other side of the world, however, and his seemingly well-grooved skills have tended to desert him. He struggled for impact in his one Test here, at Durham in 2013, and two county stints in 2015 and 2016 at Yorkshire and Middlesex tallied 34 wickets in 11 games at an average near enough to 40, while also giving up more than 3.5 runs per over.

Nevertheless, Bird has continued to front up, earning a berth on the Australia A tour and thus a chance at Ashes selection by hoarding 50 wickets at 22.22 for Tasmania in 2018-19, after 37 at 21.81 the previous summer. Ahead of the internal trial match between two Australian sides that will provide the selectors with the final information they need to cut 25 players down to 16, Bird knows he is duelling for, at best, one remaining bowling spot with the likes of Peter Siddle, Chris Tremain and Michael Neser.

When he takes the Dukes ball in Southampton, he will do so with the words of no less a Dukes exponent than Stuart Broad in his mind – they are worth recounting for all of Australia’s Ashes aspirants. “I’m probably not trying to swing the ball as much as I used to,” Bird said. “I’ve fallen into the trap over here a couple of times when I’ve come and played county cricket as well, to just focusing on swinging the ball rather than bowling the right length and I think that’s what’s cost me really.

“I’ve spoken to a lot of guys that have played cricket over here, in either Ashes or guys I’ve played with, guys like Stuart Broad and stuff like that, and they just say you’ve got to bowl the right length that’s going to hit the top of the stumps or hit the knee roll [on the pad] and if the conditions suit it will swing anyway.

“That’s all I’m trying to focus on doing and I think in the spells where I’ve bowled a bit full or been too expensive it is probably for that reason, so the spells that I’ve bowled well in I’ve been hitting the wicket and hitting the top of the stumps – it’s a good blueprint going forward.”

The memories Bird has accumulated from numerous England trips should give him a decent chance of squeezing into the Ashes squad, although he was realistic about the fact that while many of the group assembling in Southampton on Thursday were already nailed on, he was very much in the group on the edge of things.

“It might be a team rule, can’t fraternise with the opposition! It’ll be pretty funny I reckon, especially after a couple of weeks on tour”

“I assume there’s probably only one spot available, if that, for the fast bowlers, so I’m enjoying my time over here,” Bird said. “We’ve got a good bunch of guys that have had a good couple of weeks in this Aussie A stuff and we’re all looking forward to getting down to Hampshire.

“I felt pretty good, I think I’ve improved from Arundel last week, so made a couple of good strides over the last week. I probably went for a couple of runs in my first spell but I thought I brought that back nicely and bowled a good spell in the middle of the day and, yeah, was pretty happy with the hit-out.

“Anytime you come up against a Lions team, it’s a good hit-out, and this game was no different. There were a couple of guys in their Test squad against Ireland that were playing, so it’s good to bowl to a few of their batters who are on the fringe as well, in case they do get picked in the Test squad and you do play against them, at least you’ve got a bit of experience against them. You can never take that too lightly.”

Frustration at Cricket Australia over the quality of county opposition rolled out for warm-up games on previous Ashes tours has manifested itself in the pitting of the two Australian sides against one another in Southampton next week. While the selection of the teams is a mystery, Bird revealed that the groups will be training separately, a likely necessity due to the sheer size of the group otherwise.

“We don’t really know what the teams are going to be and how they’re going to pick the teams so that’ll be interesting to see what happens there in the next couple of days,” Bird said. “I think we’ve got a bit of an idea of what’s going to happen, I think were training separately and stuff like that, so we’ll at least try and make this game as competitive as possible.

“It’s the only red ball hit-out for a couple of the guys that have been playing in the World Cup. I think those games can drag on a bit if they’re not taken too seriously so hopefully it’s 100% the whole time.”

And with all players and staff crammed into the one hotel, that could make for some intriguing dynamics at the breakfast bar, among other places. “It might be a team rule, can’t fraternise with the opposition!” Bird joked. “It’ll be pretty funny I reckon, especially after a couple of weeks on tour, there’s going to be a few blokes who’ll cop it from other blokes I reckon, airing a bit of their grievances over the tour. It’ll be good fun.”