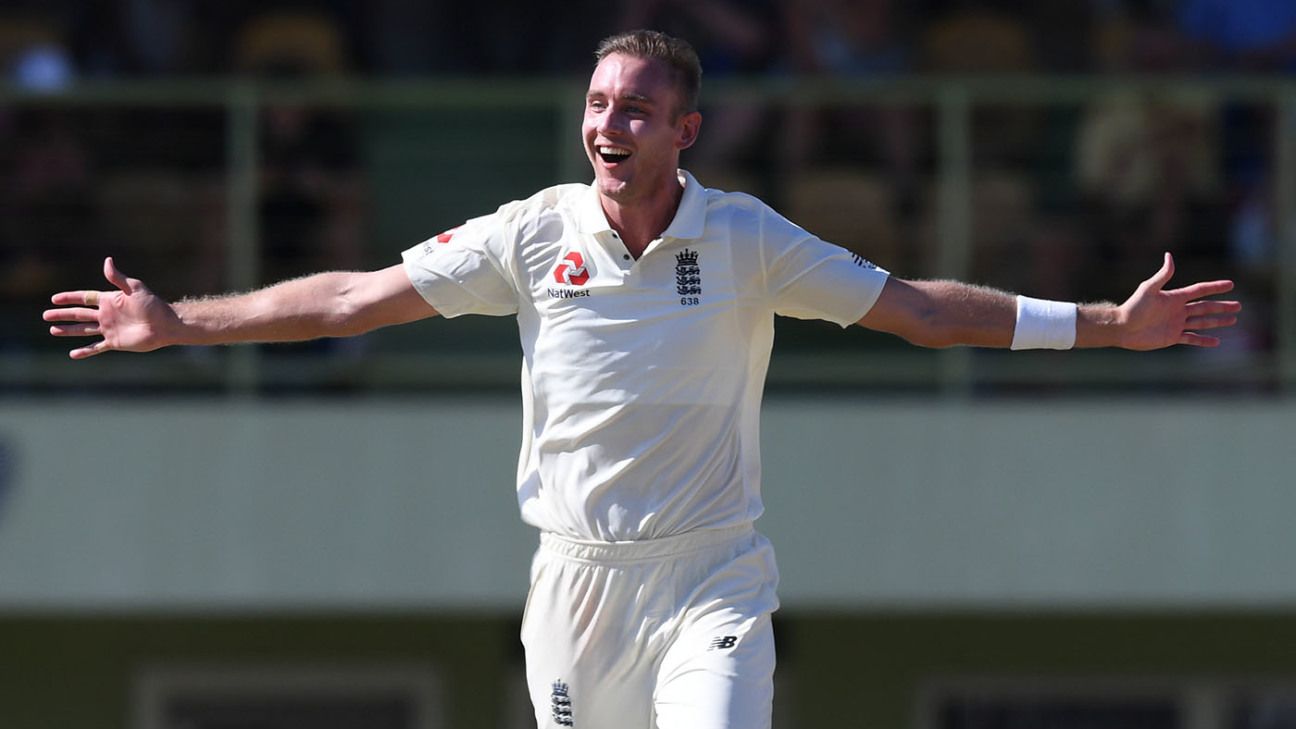 Stuart Broad‘s hat-trick was the highlight as England claimed 19 wickets in a day against the CWI President’s XI.

You could be forgiven for looking at the scorecard of this match and dismissing it as a nonsense. And it is true, in these two-day warm-up games, a certain level of scepticism does have to be applied. The match does not carry first-class status and none of these statistics will be incorporated into any of the players’ career records.

But this opposition contained six men with Test experience and one more, in John Campbell, who will make his debut next week. So to reduce them to 203 for 19 – yes, you really do have to be sceptical about these statistics – represents a fine effort from an admirably ruthless England. The sad news about Olly Stone’s stress fracture apart, they will have been delighted by this first match.

That odd-looking scorecard is testament to a couple of other things, too. Firstly, this was a poor pitch. Neither the pace nor the bounce were even and no batsman, with the exception of Joe Root, looked comfortable upon it. The original plan was to freshen it up with some water and use it again for the two-day warm-up game that begins on Thursday. It may prove wiser to dig it up and plant potatoes.

The other factor, as well as England’s fine bowling and the substandard surface, was some painfully loose batting. To see Jermaine Blackwood – who made an eye-catching maiden Test century against England not so long ago – thrashing around like a drowning man was painful. Twice in the day he was caught in the cordon – he also survived an edged boundary over the slips – as he threw his hands at the ball.

This was a chastening experience for Campbell, too. He knows he will make his Test debut against England next week, so to be dismissed twice in the day for a combined total of two runs was hardly the confidence boost he required. If being beaten by a direct hit from Joe Denly at long-off as he attempted to complete a second run was unfortunate, his first dismissal, wafting at one in James Anderson‘s second over, was naive.

There were periods of resistance. Vishaul Singh, in particular, showed determination in both innings – he batted for more than two hours before charging down the wicket to Moeen Ali – but in general there was an alarming lack of application from the President’s XI. The fact that Root claimed three wickets with his mix of offspin and legspin did not flatter them.

On the face of it, Broad was the biggest beneficiary. After a wicketless opening spell, he claimed four in five balls, including dismissing Nos. 9, 10 and 11 for his hat-trick, as the President’s XI tail declined to wag. Three years to the day since he took a six-for in Johannesburg, Broad looked in good rhythm using his new, shorter run-up, and found movement away from the right-handers on a good length.

“Those five or six overs in the afternoon were as good as I have felt for a long time,” Broad said. “The important thing was the new run up. I have slightly shorter strides and hit the crease hard. The first spell was just about getting used to it out in the middle.”

Anderson was the pick of England’s seamers. Generating decent pace and movement, he claimed 4 for 12 – all four top-order batsmen – in 11 immaculate overs. While he occasionally required treatment on the boundary edge, he remained on the pitch throughout the day and looks in good shape heading into the Test series.

How relevant Sam Curran sharing the new ball with him was remains to be seen. But Curran, preferred to Broad as Anderson’s opening partner by virtue of his ability to swing that new ball, also claimed two wickets in his first spell, including a beauty to account for Sunil Ambris. This Dukes ball – slightly different to the UK version – appears to stay harder for longer and swing for most of the day. It may be there is no need for Curran to be used so early.

Moeen was probably the pick of the spinners. He finished with two wickets, while Jack Leach managed just one and was the only bowler to concede anywhere near four an over.

Meanwhile, back in London, it emerged that Chris Haynes, the ECB’s director of communications, is to leave the organisation. Suffice it to say that, after a year in which details of the ECB’s new competition, The Hundred, emerged in a series of leaks, spurts and rumours, the divide between the counties and the board sometimes appeared larger than ever, and the ECB chief executive did not give a single in-person press-conference to cricket journalists, the news does not come as a complete surprise.