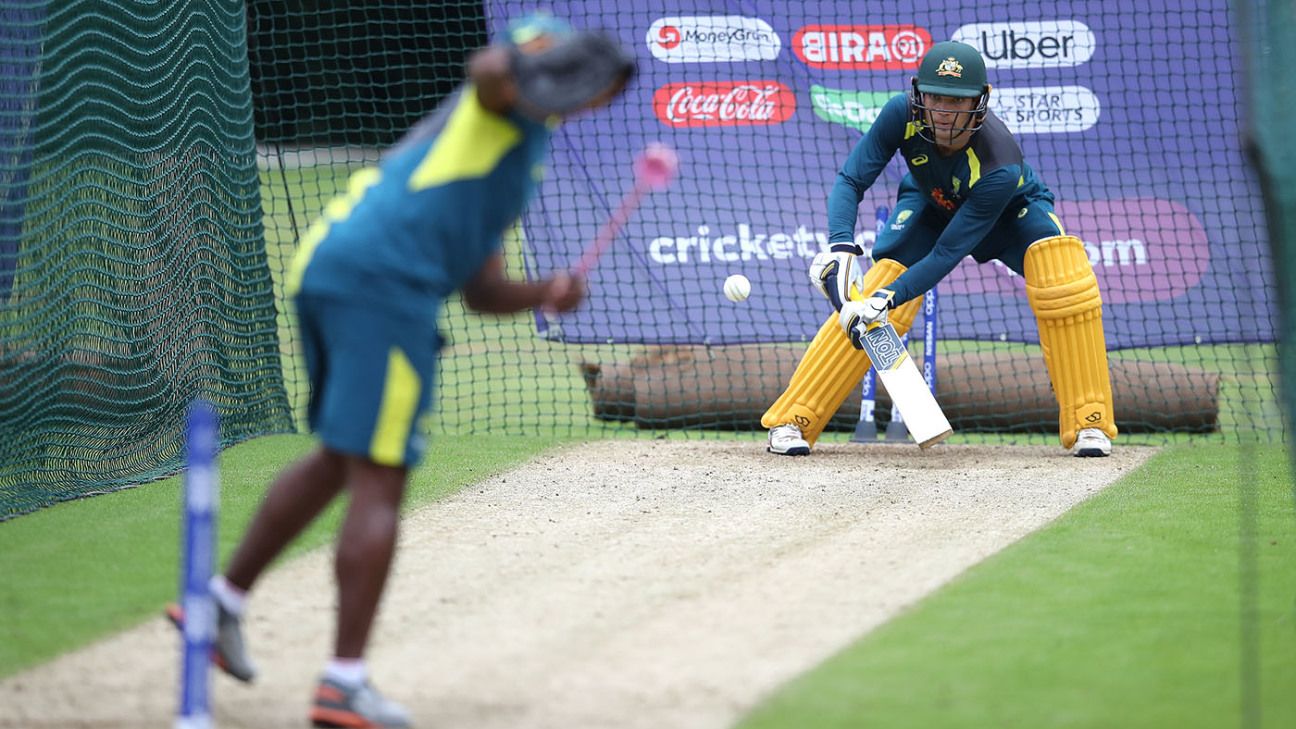 Alex Carey‘s scar is healing well. Signs of the blow to the chin by Jofra Archer’s short ball in Australia’s World Cup semi-final defeat are still there, but will not be anywhere near as indelible as the mark Carey made on the tournament with a series of innings that had him earning comparisons with Michael Hussey by the time of his team’s elimination.

That the man making the comparisons was Steve Waugh, now seconded to the Australian team as a mentor for the early part of the Ashes tour, is another reason for Carey to find a way to squeeze into the touring party as the reserve wicketkeeper to captain Tim Paine.

“If I’m half as good as him, I’ll be happy – he’s an incredible player,” Carey said of the Hussey comparison. “Having Steve is amazing for the group. I think he’s won nine Ashes … and been over here and played a lot here. To have the knowledge of Steve Waugh, one of the greatest Australian cricketers, be a part of this group is something we’re really lucky to have.

“Personally, I just had a quick chat just getting to know Steve. It’s quite early and he’ll mentor us and have his spin on things. It’s just great knowledge to have. Steve’s been watching the one-day stuff and commentating a bit there. I’ve had a few little chats with him but more moving now into the red ball and getting that focus of a longer format.

“The patience of the game, staying focused for longer, little things that will come out over the next few days. The more we train the more you start talking, you start asking questions.”

A combination of composure, invention and power when required had Carey making the No. 7 spot into far more of a bulwark than it had first appeared, and ultimately led to promotion up the order. The variety of circumstances in which Carey was asked to contribute, whether going on the attack late in an innings or restoring things from a shaky start, allowed him to demonstrate the sort of range becoming of a Test batsman, something not lost on Waugh, among others.

“I guess different circumstances throughout the World Cup were really good learning experiences for me,” Carey said. “Having Smith and Warner back in the side, and the experienced guys I got to bat with, you learn a lot out in the middle.

“Obviously batting seven you hope to come in during the last 10, and if you don’t then you do your best through the middle to be busy, occupy the crease, all those things. At times it felt just like play good cricket, and play a bit of Test cricket – absorb some pressure and rebuild at times. It was good to go through different circumstances and have some success.”

Different circumstances are a part of Carey’s story in many ways, given that he stepped out of cricket for some years to try his hand at Australian football, ultimately falling short of a full AFL contract with Greater Western Sydney Giants and then returning to the ranks with South Australia. That diversity of experience has served him well, although also means Carey is still very much learning his cricket craft.

“The last six to eight weeks have been a massive learning experience for me and then going back 12 months even,” Carey said. “Every time I go out to play I try to learn as much as I can from success or failures, learn from the experienced guys in the team and once you get put under pressure you learn a lot about yourself pretty quickly as well.

“So it’s been a bit of a different journey but it’s also helped me a little bit as well. Having a few setbacks you sort of realise what’s important and make sure you come back to training and try to get better every day.”

Depending on how the next few days pan out, Carey will be looking either at a setback – missing the Ashes squad – or a continuation of his rise. The presence of Matthew Wade, who will play as a batsman alongside Paine in the internal trial match beginning on Tuesday, means that there are a few options. A squad number of 16 mooted by selection chairman Trevor Hohns, however, makes things tighter for a specialist reserve gloveman. Carey will need to show he can carry his weight with the bat in red ball terms as well as white.

“It’s obviously a pretty unique situation, a unique game we’re about to play in,” Carey said. “Just do our best I guess and go out and hopefully perform is firstly what we want to do and go from there. I’m really excited to get an opportunity with the gloves on Tuesday and simple as that.

“My last [first-class game] was in Sydney before Christmas, so it’s been a little while. But I thoroughly enjoyed the World Cup and getting some opportunities with the bat. Obviously keeping is my first priority, so I’m really looking forward to training the next few days with the red balls.”

Undoubtedly, Waugh will want to see Carey flourishing, and the 27-year-old said the motivation flowed both ways. “As soon as you see an Australian great you want to impress them,” he said. “Having Ricky [Ponting] here, he was so good to have around the group. He was a lot of fun, he had good banter as well so everyone felt comfortable around the group. Steve, I’m sure, will be the same.”