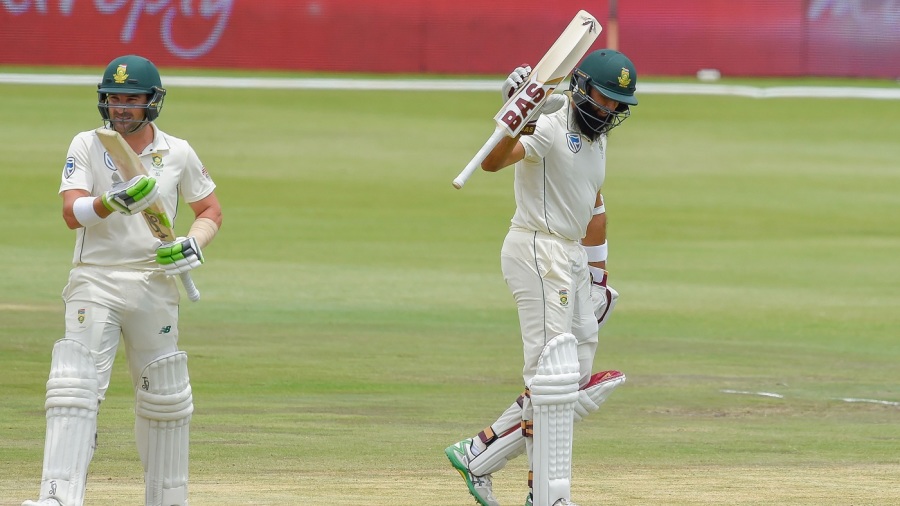 An unbeaten 63 from Hashim Amla – his first fifty in 11 innings – helped South Africa to a 1-0 series lead over Pakistan with a six-wicket win in the first Test in Centurion. Alongside Dean Elgar, who contributed 50 to a 119-run stand, Amla weathered an intense first hour on Friday morning and then slowly but surely reversed the pressure to gain control of the innings after the early dismissal of Aiden Markram to the second ball he faced. Amla and Elgar’s partnership set a new South African record for the second wicket against Pakistan in Tests, and secured a win inside three days in a fast-moving match.

Both men enjoyed slices of luck during a thoroughly absorbing morning session, and in the early exchanges, every ball was an event. Elgar was kept on nought for 18 deliveries and Amla wasn’t able to score until his 14th, and even once they started to score the chances kept coming.

Elgar was off the mark with a thick edge that flew directly between the third slip and gully fielders, and in Hasan Ali’s next over, Amla flashed a thick edge hard and straight to Fakhar Zaman at third slip, the ball bouncing off his chest and dropping to the ground in front of the sprawling fielder.

That was just the slice of luck Amla needed, and Elgar too had a huge piece of good fortune soon afterwards. Shaheen Afridi hustled through his first over and found the edge of Elgar’s bat with his fifth delivery, the ball flying low to Azhar Ali’s right at first slip. He appeared to have taken a sharp catch cleanly, but the on-field umpires Bruce Oxenford and S Ravi asked TV umpire Joel Wilson to have another look. The soft signal was out, but Wilson saw enough on the replay – the fingers of Azhar’s right hand having not quite got under the ball – to offer Elgar a reprieve.

Coach Mickey Arthur protested animatedly from the change-rooms, and Pakistan had lost two clear chances in consecutive overs. Frustrated, Pakistan gambled a review when Amir returned to the attack and caught Amla’s forward press pad first, but replays showed the ball missing off stump, and with every run scored thereafter, Elgar and Amla strengthened their grip on the match.

Elgar took the partnership to 50 – and the requirement to under 100 – with a neat little clip to the midwicket boundary in the 19th over of the day. He didn’t flinch despite repeated blows to the body, and when spin was introduced he immediately swept Yasir Shah to the fine-leg boundary. At the other end, Amla was into the 40s with a pair of trademark shots off Hasan and batted with increasing assurance despite conditions remaining challenging throughout the day.

Amla was first to his fifty, caressing a short ball from Afridi to the point boundary in his first over after lunch. Elgar took his time grinding his way to his own fifty, but also allowed himself moments of flamboyance along the way, lifting Hasan back over his head to move to 45.

Elgar raised his fifty with his 10th four, easing Shan Masood back down the ground, but wafted tiredly at the next ball to present an edge to Sarfraz Ahmed and give Masood his maiden Test wicket. In a scrappy finish, Theunis de Bruyn over-egged his attempts to get after Yasir and was stumped, while Faf du Plessis emulated his opposite number Sarfraz in bagging a pair: the first time in Test history both designated captains have failed to score across four innings in a Test. South Africa slipped to 137 for 4 within touching distance of victory, but Temba Bavuma entered and displayed similar form to the first innings, leaning into a cover drive at Afridi and then sweeping Yasir through square leg to seal the result.

While Pakistan’s quicks bowled admirably, this was South Africa’s Test: starting with Dale Steyn’s record 422nd wicket on day one, through Duanne Olivier‘s maiden five-for (and 11 in the match), Kagiso Rabada’s 50th Test wicket in the calendar year, and a welcome return to form for Amla in testing conditions, the hosts will head to Cape Town as very much the happier team.