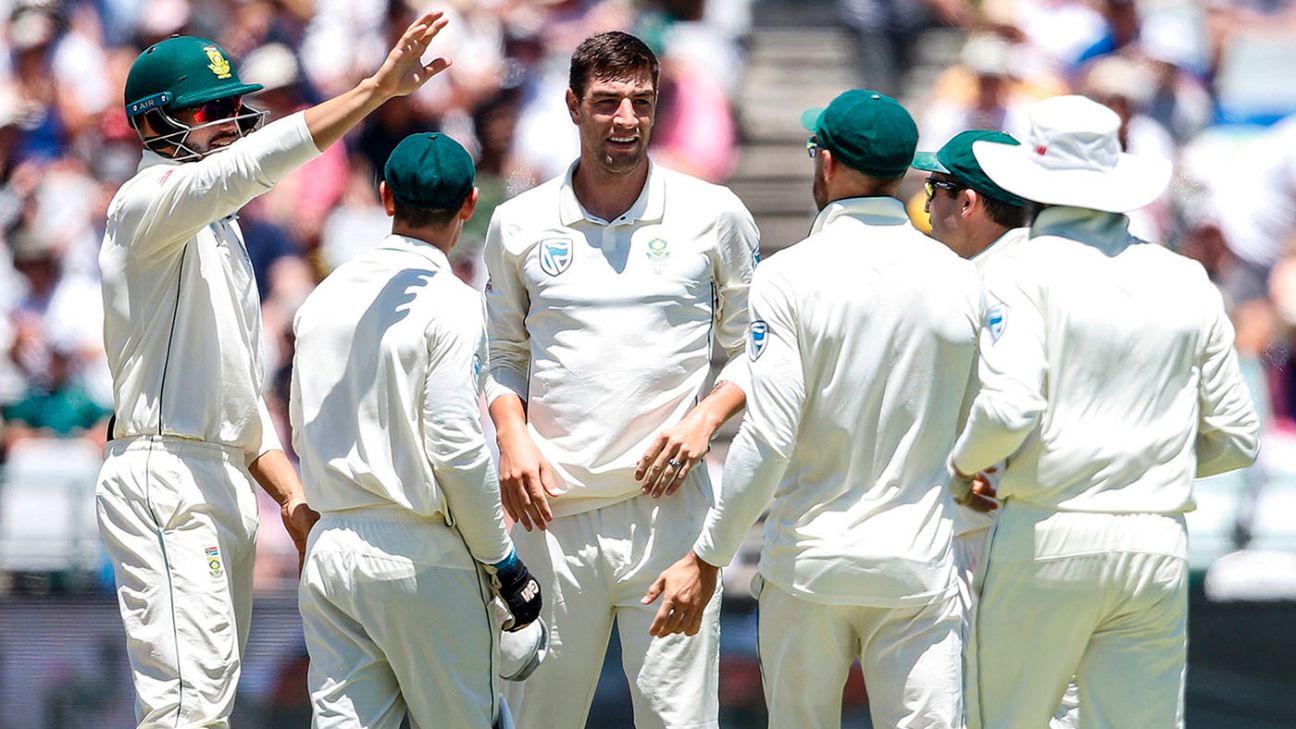 South Africa are playing at their least-favourite venue on home soil, on a pitch that can often take significant turn, but so beleaguered are the opposition, that none of that may matter. Under better circumstances, Sri Lanka would go into a Kingsmead Test feeling they have a decent chance. If they had the experience of Angelo Mathews in their middle order, and their first-choice seam attack on tour, there could’ve been hopes of competitive totals mustered, and some testing spells could be put together.

Instead they have their most inexperienced touring group in recent memory, a brand new captain, and a coach whose rock-solid contract now seems main safeguard against a summary sacking by the cricket board. This is not even to mention the ICC’s fixing allegations, social media squabbling, and ad hoc interference by the country’s Sports Ministry. There is no bigger challenge for visiting batsmen at the moment than playing fast bowling in South Africa. It’s difficult to think of a more fragile Sri Lanka batting unit this century.

The hosts, meanwhile, are in excellent spirits following their domination of Pakistan over December and January. With Sri Lanka having crushed them on the island last year, there is also a little extra motivation for South Africa to ensure they do not ease off the opposition at any stage.

South Africa will see this Test as an opportunity – not only to claim a rare win at Kingsmead, but also to fiddle with the team combination, with a view to bedding in a more versatile attack. Where against Pakistan they had fielded four frontline quicks and seven batsmen in two of the Tests, Sri Lanka’s seemingly modest bowling means South Africa will be more likely to pick one fewer batsman, in order to give themselves more bowling options.

Keshav Maharaj is one of the most promising Test spinners in the world, but is in the frustrating position of having to sit outside the playing XI in many home Tests. Under Ottis Gibson, South Africa have strengthened their commitment to fast bowling, and their pace options are now as strong, perhaps, as they have ever been, with the likes of Duanne Olivier emerging over the past few months. Maharaj, though, has been collateral, and now must pick himself up and deal with the pressure of expectation. This being Kingsmead, and this being his home venue, South Africa will want wickets out of their lead spinner.

It is difficult to think of a Sri Lanka captain who has had a more difficult first-up assignment than Dimuth Karunaratne. He has spoken about the role being a privilege, and of the excitement with which he is approaching his job, but if you look at the mess he has been saddled with, there is an element of cruelty in this appointment. What’s he to do, for example, with an attack with less than 20 Tests between them, and a batting order that produced only two fifties in their last series? Karunaratne had an outstanding series with the bat against South Africa, in Sri Lanka last year, outscoring the entire opposition in one of the Tests. If they are to stand a chance again, he will probably have to have a similarly sublime batting series.

Faf du Plessis said he would think of bringing in Wiaan Mulder as a seam-bowling allround option. If they do go in with one fewer batsman, Theunis de Bruyn, who did not cross fifty against Pakistan, seems likeliest to miss out. If Mulder plays, there’s also a question as to which fast bowler is dropped. With Duanne Olivier in excellent form, and Kagiso Rabada’s selection a no-brainer, one of Vernon Philander or Dale Steyn may have to make way.

Suranga Lakmal has recovered sufficiently from a back injury to return to the XI, according to the team management. Sri Lanka do have a decision to make as to which fresh batsman replaces Dinesh Chandimal in order, however. It could be Angelo Perera, who recently became only the second batsman to hit two double centuries in a single first class match. Or it could be left-arm spinning allrounder Milinda Siriwardana, who has a little experience at the top level, as well as some decent domestic form himself.

Du Plessis is hoping this Kingsmead pitch has more pace and bounce than those seen in recent years at the venue, but admitted that spin probably had a substantial role to play as the Test wore on. The forecast for Durban is not great. Rain is forecast to interrupt the first two days of the Test.