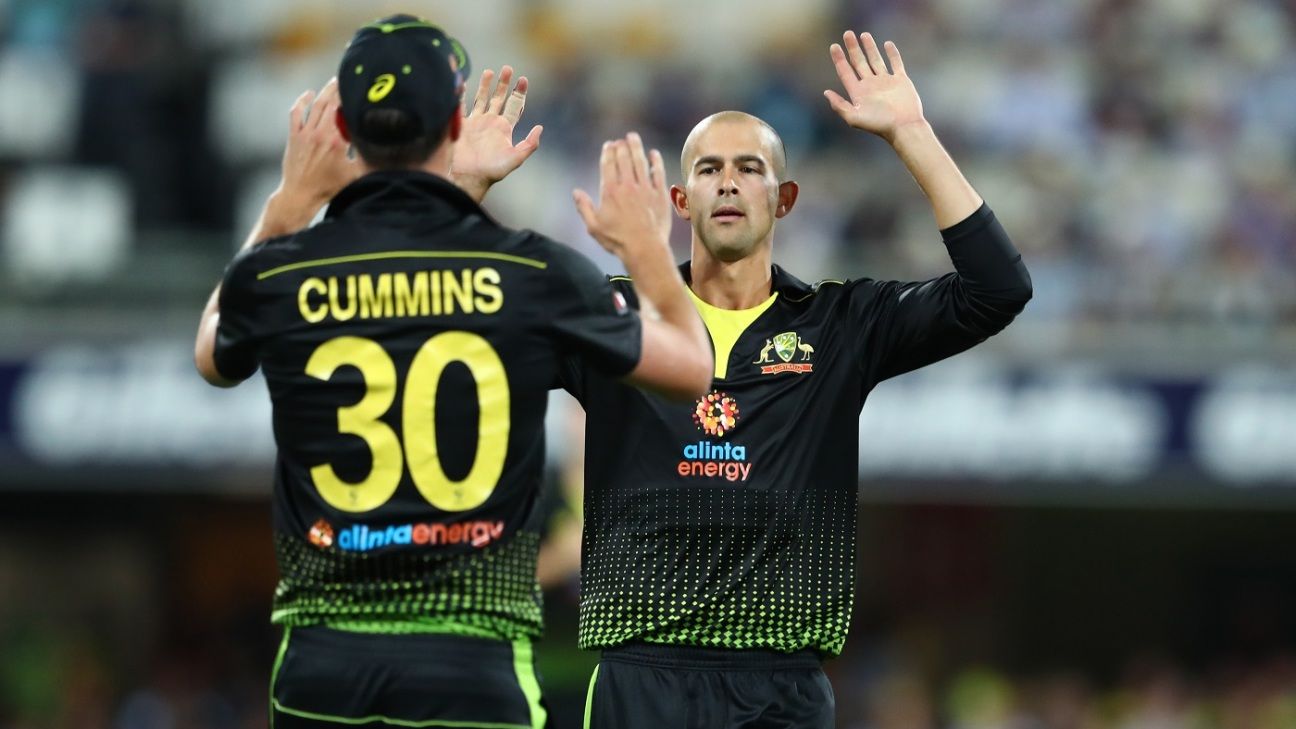 Twelve months ago, Australia went into a home T20I against South Africa without a specialist spinner.

It was a rain-shortened 10-over game but it was the second time since the 2016 T20 World Cup that they had opted not to pick a frontline spinner in home conditions, having only once picked two in a side at home in that time.

Yet 12 months out from a home World Cup, it’s looking increasingly likely that Adam Zampa and Ashton Agar could be key pillars in Australia’s specifically designed five-man attack in home conditions, following their success as a pair in the 3-0 whitewash of Sri Lanka.

Agar and Zampa were Australia’s two most economical bowlers for the series, conceding just 5.33 runs per over each, and taking eight wickets between them. At the MCG on Friday night, they bowled five overs straight in tandem without conceding a boundary to restrict Sri Lanka as they attempted to make a competitive total. Agar conceded just one boundary for the series, Zampa only three.

Both came in for special praise from player of the series David Warner post-match. “The two spinners for me have been the stand-out,” he said. “Their lengths have been great, they haven’t been hit for many boundaries and they’re getting in and out of their over very well. So that’s very pleasing for us on a bowling front.”

They have benefitted greatly from the work done by the quicks in the powerplay – Sri Lanka were 3 for 29, 2 for 36, and 2 for 41 after six overs each time they came on to bowl – and they will need to be tested under tougher circumstances, but it seems Australia may have stumbled on a combination after so many years of trial error with their spin department.

Both Zampa and Agar have found themselves in and out of favour at different times. Mitch Swepson played a T20I in England last year before Agar filled the role on his own in Zimbabwe with the part-time support of Glenn Maxwell and D’Arcy Short. Zampa returned in the UAE in favour of Agar and had Nathan Lyon join him in one game. It was felt that Australia’s Test offspinner, who made his name in T20 cricket and has a better career economy rate than both Zampa and Agar, could fill a permanent role.

No spinner was used in the first game at home against South Africa last summer before Zampa was the solo frontliner for Australia’s next five T20Is against India.

But with a rethink in Australia’s batting strategy, with no Short or Marcus Stoinis present in the top order thanks to Warner and Steve Smith’s return, Australia have got creative with the pivotal No. 7 role, opting for the specialist spinner in Agar who can hit if required, rather than the specialist bat who can share four overs with Maxwell.

They have discovered on the huge grounds in Australia, that it could prove a winning formula.

“I think it’s important to have those options especially when you have a left-arm and a leg-spinner,” Australia captain Aaron Finch said. “When Maxi [Maxwell] is playing he offers that off-spinning role as well which can give someone a chop if they’re not having their best day. The two spinners, all the stats suggest the runs per over from spinners are lower in this country than quicks and I think that’s based off ground size, how true the wickets are too.

“It’s not a non-negotiable but structuring up for these two series we’ve felt that it was our best five bowlers going forward. Agar offers that brilliance in the field, very good with bat when he’s playing well, he just hasn’t had the opportunity yet, which is also a good thing that our No. 7 and No. 6 haven’t had a hit. At some stage, he’ll no doubt get his opportunity with the bat and do really well.”

Finch was also really pleased with Zampa’s form. There was some pressure on the legspinner following an underwhelming World Cup where much was expected from him. Cameron Boyce’s name continues to be thrown up given his equally good overall T20 record, but Zampa has answered any critics thus far.

“His length has been really important,” Finch said. “I think everyone, I know I did in particular, overplayed how big an impact spin would have in the World Cup. Everyone felt at that time of the year with a lot of matches being played on surfaces that spin would play a huge part. England grounds are bloody small. If you get it slightly wrong you get hurt, especially as a spinner. That was one thing we overplayed slightly.

“He’s bowling beautifully at the moment. His length is great, he’s not giving batsmen width, he’s defending his overs really well. To get in and out of your overs is so crucial in T20 cricket and he’s doing that really well and having that experience playing at the MCG which is very short straight over the last few years in the Big Bash think that’s helped him a lot in his T20 cricket.”

It’s taken Australia longer than most to embrace the importance of spin in T20 but now it’s looking like a key element of their bid for a home world title.