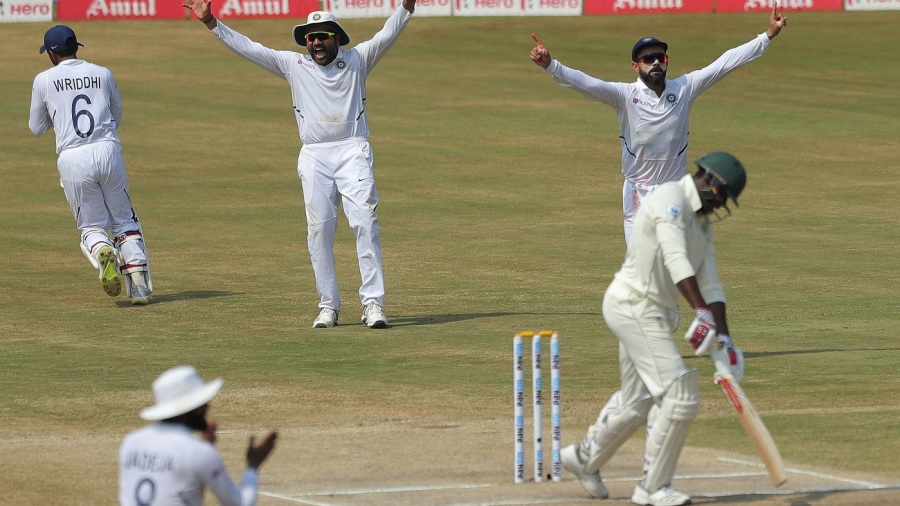 Playing India in India has never been easy, but in an era when India have possibly the most rounded bowling attack they’ve ever had, it takes an exceptional performance, a la Steven Smith and Steve O’Keefe in 2017 in Pune, to overcome exceptional odds. That defeat in February 2017 remains the only loss for India at home since the start of 2013, across 30 Tests. Twenty-four of those have resulted in wins.

Virat Kohli’s Test side have not won every session of all their home Tests – indeed sometimes they have looked behind the match for a couple of days like they did in Bangalore 2017 right after the Pune Test – but they’ve found a way resist a collapse, stall a partnership, or pinch a breakthrough when needed. And visiting teams haven’t been able to put together sufficiently dominant passages of play to snatch a victory.

This is the first Test in Pune since that Australian win, though that will have little practical value for South Africa. To repeat what Australia did, the South Africans will have to figure out the bowling attack that gives them the best chance of 20 wickets, while drawing on their first-innings showing in Visakhapatnam to put in not just one but two solid batting performances.

South Africa will feel like their captain’s luck at the toss too is due a change. Faf du Plessis has lost eight consecutive tosses in the subcontinent, and when he called wrong again last week, his wry smile was more eloquent than words could be.

There’s never a time when Virat Kohli is not under the spotlight but he’s had a minor bump in his accumulation of batting Test wealth since the Boxing Day 2018. He’s averaged 36.50 and gone five Tests without a century – two in Australia, two in the West Indies and the first Test against South Africa – which is a fairly rare occurrence. The last time it happened was in 2015, and encompassed South Africa’s last tour of India, where the pitches made run-scoring very challenging. He broke out of that by hitting his first Test double century, against West Indies in North Sound.

When Keshav Maharaj burst on the scene for South Africa, it seemed like the team would finally have a rounded bowling attack with a world-class spinner to complement what has been almost an assembly line of skilful pacers. Maharaj has taken wickets and kept the runs down in supposedly spin-unfriendly countries, but wasn’t consistently threatening in Visakhapatnam, where South Africa might have looked to him to be the lead bowler. He has come back from a performance like this in the past, memorably taking 9 for 129 against Sri Lanka after going wicket-less in the first Test of that series. For South Africa to compete on a more equal footing with India, he needs to rediscover himself again.

India brought back Rohit Sharma and R Ashwin for the first Test, and both performed spectacularly, giving Kohli and the team management the luxury of a settled XI after the very first game. The Indian captain indicated that they were unlikely to tinker with a winning combination.

South Africa might consider beefing up their pace bowling by bringing in Lungi Ngidi, or even going with the express Anrich Nortje, in place of Dane Piedt. While Piedt showed great heart with the bat, his bowling posed no problem for the Indian batsmen, and he struggled for consistency too. With a nice green cover on the surface, an extra fast bowler might come in handy for first half of the match.

There’s a decent covering of grass on the pitch, though it’s not expected to be a seam-friendly surface on all five days. Kohli felt that the grass wasn’t enough to indicate that “only seamers are predominantly going to be effective on this pitch, all five days”.

The weather has typically been hot in the daytime with rain in the evenings, though the rain doesn’t appear to leave the outfield any worse for wear the next morning.

“You do know that it’s going to dry out at some stage, and you can’t go predominantly one-sided in your attack and then not have the balance. We are pretty balanced in our team composition, and if any changes need to be made looking at how the pitch might behave on the first three days, then we’ll do so, but we don’t see any major things to think about, looking at the pitch.” – Virat Kohli indicates the danger of going all-pace in India

“The difference with us from 2015, where you try and survive in Indian spinning conditions and with that sometimes you can become too defensive and you allow the opposition to be on top of you the whole time, now it needs to be a good combination of positive play, an element of taking risks at some stages of the game to try and counter that pressure from the bowling” – South Africa will focus on changing their approach to playing spin bowling, says Faf du Plessis.