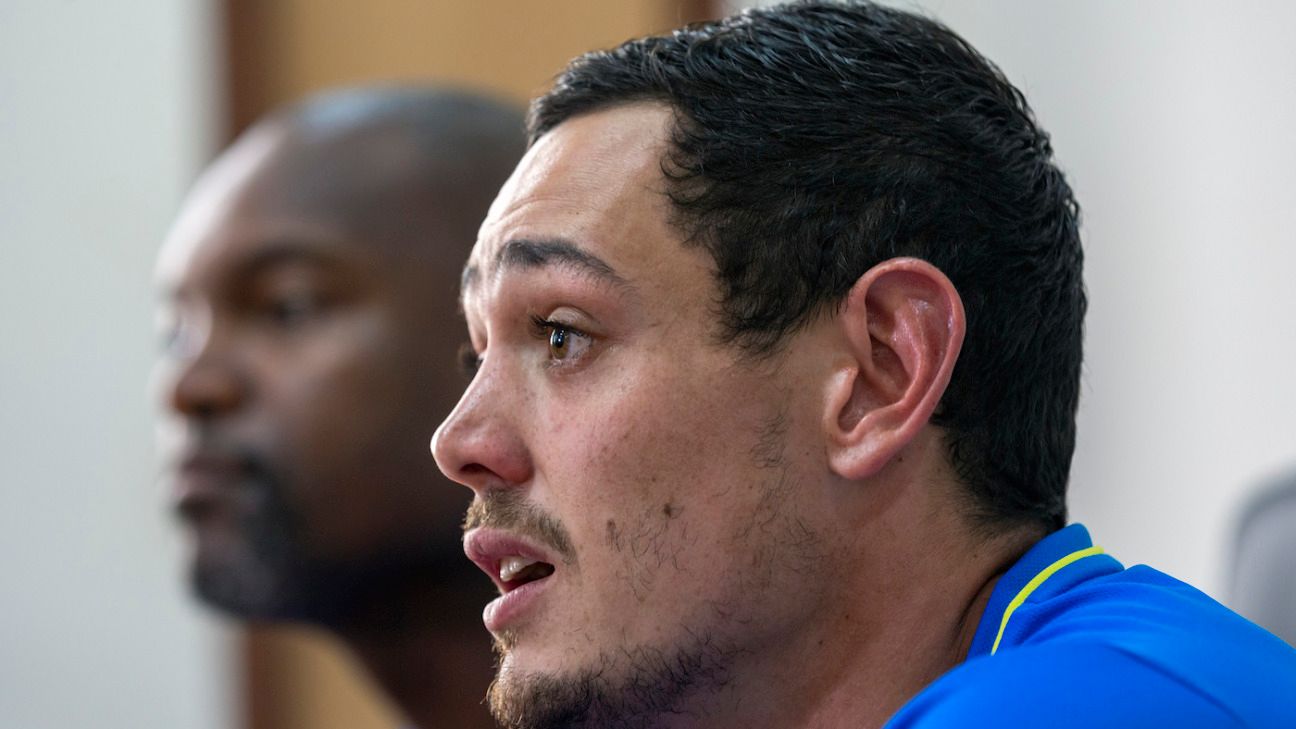 Quinton de Kock believes Faf du Plessis will still lead South Africa in next year’s T20 World Cup in Australia but said he would probably not turn down the opportunity if asked to captain in the format.

The wicketkeeper-batsman, who captained South Africa in their recent T20I series in India, has been appointed skipper of the Cape Town Blitz for the second edition of the Mzansi Super League and is being seen as a successor to du Plessis in the shortest format.

“The way I see it is that I was just a replacement,” de Kock told ESPNcricinfo. “That’s the way I took it. For now, its still Faf’s baby. But maybe if things change and they do want me to do it, then I will do it.

“For the moment, I am not looking too far ahead. I am just trying to look at how I can help out with the youngsters, with the new guys in the T20 team and by myself, just getting better and getting ready for the T20 World Cup next year. But if that does come upon me, then I will try and grab it with both hands.”

He did exactly that when Blitz coach Ashwell Prince approached him at the MSL draft on September 3. “Ash came to me at the draft and asked me if I want to do it and I said, ‘Ja, no problem.’ It was pretty quick and easy. I don’t think there was much discussion around it. He just asked me right there and then and I said yes,” de Kock said, speaking at the Cape Town Blitz media day.

“We [South Africa] are not the first team that has gone through a transition. England did it after their last World Cup and look at them. Four years later, they end up winning the thing”

Prince had a good reason to ask de Kock – that his team needed the stability of a leader who would be around for the full five-and-half-weeks of the tournament. Last season, Blitz were led by Dawid Malan for the first two matches before Farhaan Behardien took over on his return from international duty in Australia. With Malan not involved in this year’s event and Behardien playing for the Nelson Mandela Bay Giants, Prince had to find someone else, someone who would also bring form and the ability to think on his feet. De Kock, fresh off two half-centuries in his first two matches as South Africa’s T20I captain, and known for his no-frills approach to playing, seemed to be the perfect fit.

“He leads from the front as a player but he is also streetwise,” Prince said. “I like people who can see what’s required on the ground and can make calls and be brave and I think he does all of those things.”

De Kock will also need to do a bit more. His new role means he will open the batting, keep wickets and lead the side, a trio of tasks that became too much for even the likes of AB de Villiers, who did not open but had a similarly important role of setting the tone in white-ball innings.

In keeping with his carefree nature, de Kock is not fussed about the workload. “It’s nothing too difficult – keeping and batting, and the keeping will help out my captaincy anyway,” he said. “Rather than being out in the field, I seem to read things better, how the pitch plays, which bowlers to bowl when, the angles and all that kind of stuff when I am keeping. I feel like the keeping helps my batting and also my captaincy.”

This season of the MSL could confirm if de Kock is indeed equipped to perform all three tasks and may also tell whether he is seriously considered for the national job in the near future. Asked if that’s where he sees de Kock’s career going, Prince said: “Why not? He is still quite young. He hasn’t captained a lot but everyone has to start somewhere. He has had a bit of a taste of it and I think he can grow in the role.”

De Kock’s only stint with captaincy before the India series was in an ODI series against Sri Lanka in 2018 after du Plessis suffered a shoulder injury. South Africa had already clinched the series, winning the first three ODIs, but went on to lose the last two matches which de Kock captained. That instance was considered nothing more than an emergency replacement but it marked the start of a downward spiral for South Africa, which saw them lose five Tests in a row in Asia, and three out of their last four Test series. Their white-ball form also dipped and a disastrous World Cup followed, which has left South African cricket on the brink of a crisis.

But de Kock is one of very few players to have weathered the storm. He is South Africa’s highest run-scorer in Test cricket this year and third overall, with 584 runs at an average of 44.92 and their second-highest ODI run-scorer this year after du Plessis, with 774 runs in 17 games at 48.37. De Kock also finished as the third-highest run-scorer at the IPL this season and his form could give South Africa some hope that a revival is not far off.

“We are not the first team that has gone through a transition,” de Kock said. “England did it after their last World Cup and look at them. Four years later, they end up winning the thing.”

With England the visitors this summer, there’s motivation in opposition camp for South Africa to start putting things right. But de Kock also pointed to the national team’s triumph at the Rugby World Cup as a rallying point for cricket to get itself back on track.

“It’s alright if the whole country and guys are a bit down and out but when we all gather together, especially after winning this Rugby World Cup, a lot of people are pumped up and want to get this transition going so the time we get to our next World Cup, we can really put ourselves in a good stead, just like England did.”