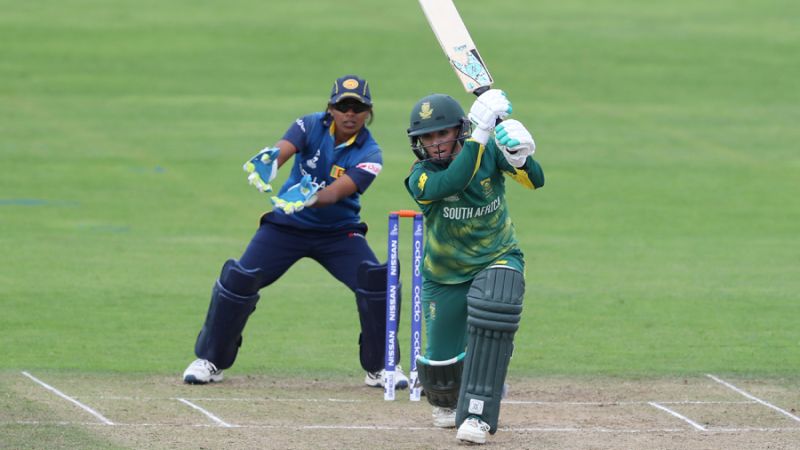 Four wickets for Suné Luus and an unbeaten fifty from Mignon du Preez helped South Africa storm to a clinical six-wicket victory over Sri Lanka in the third and final ODI at Senwes Park in Potchefstroom on Sunday.

With stand-in captain Luus grabbing 4 for 30 in eight overs and Nadine de Klerk contributing an even more economical 2 for 30 in her 10-over stint, the visitors were bundled out for 139 in 44.2 overs, their lowest score of the series, after winning the toss and opting to bat.

South Africa then hit a mid-chase wobble when Lara Goodall and Luus fell in quick succession, but du Preez’s 14th career half-century settled nerves as she batted through for 61 to guide her team to victory with more than 11 overs to spare. During the course of her knock, du Preez also became the first South African woman to score 3000 runs in ODIs.

Her efforts ensured the hosts completed a 3-0 whitewash after winning the first two games, albeit by smaller margins. This victory also became the team’s third consecutive home-series clean sweep following their T20 and ODI series wins against Bangladesh in May last year.

The bowlers put Sri Lanka under real pressure from the outset. Shabnim Ismail, who took 1 for 8 in seven miserly overs that included four maidens, was fiery up front and dismissed dangerous opposition captain Chamari Atapattu for a golden duck in the very first over of the match. Prasadani Weerakkody followed not long after, cutting Marizanne Kapp to du Preez at point, as Sri Lanka slipped to 17 for 2.

Anushka Sanjeewani‘s 28 helped to repair some of the early damage, but when she edged de Klerk through to Faye Tunnicliffe to depart in the 22nd over, the innings lost direction once more. Harshitha Madavi struck two fours and a six in her 22, but Luus and de Klerk made short work of Sri Lanka’s lower middle and when No. 11 Inoka Ranaweera chipped a catch to Kapp in the covers off Masabata Klaas, Sri Lanka were all out with more than five overs of their innings unused.

South Africa lost Laura Wolvaardt and Andrie Steyn early in their chase, both to Ranaweera, but a 50-run third wicket stand between Goodall and du Preez kept South Africa’s chase on course. It was Ranaweera, once again, who briefly threatened to derail the innings when she ran Goodall out and then clean bowled Luus in quick succession, but du Preez found a steady partner in de Klerk.

Du Preez raised a 75-ball half-century in the course of an unbroken 58-run stand, with de Klerk finishing with 20 not out as South Africa stormed to victory with 70 balls to spare.