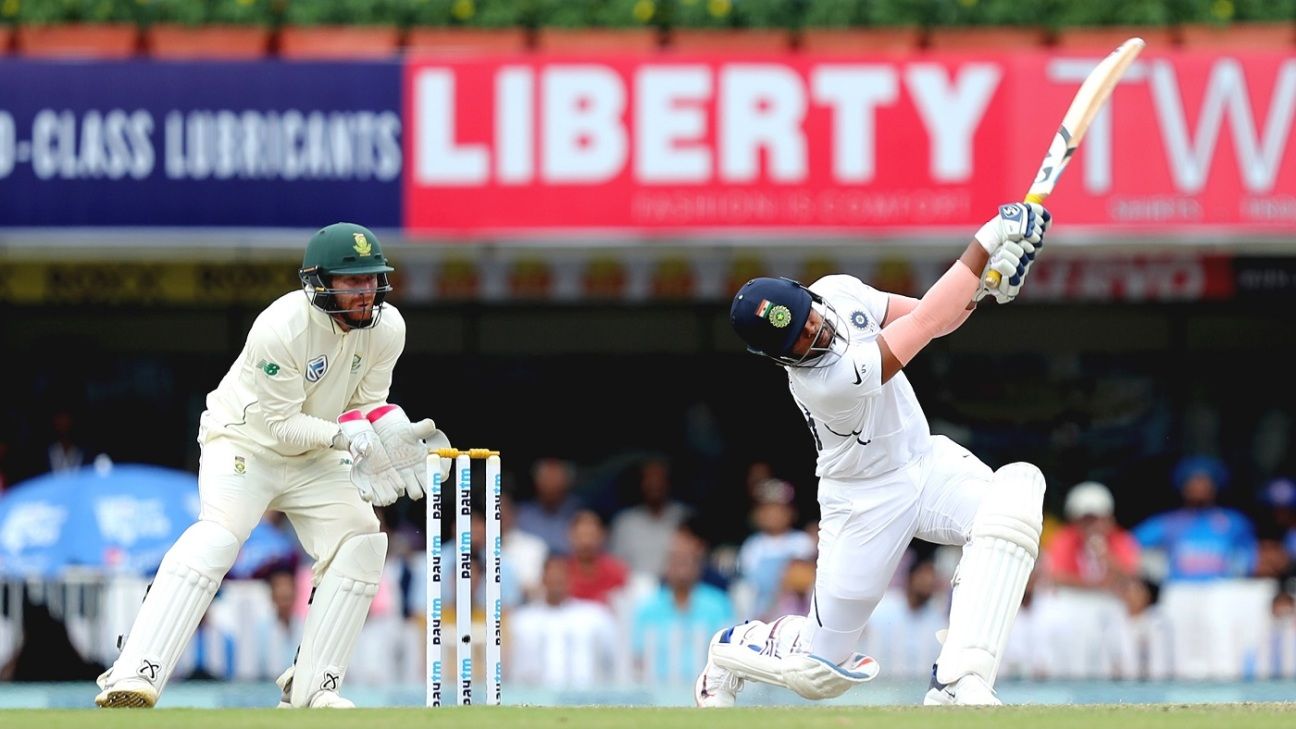 It’s difficult to see this Test match developing any differently to the previous two in this series. India have done what they did in Visakhapatnam and Pune, piling on the runs, although they declared when the total was under 500 in Ranchi. South Africa have done what they did at those venues too, by bowling inconsistently, conceding heavily and then being handicapped in response. At 8 for 2, this is their worst start yet and, barring something truly special, it appears only a matter of time before they are whitewashed.

Rohit Sharma, the star of India’s innings, enhanced his reputation further after scoring two centuries in his first Test as an opener in Visakhapatnam. Rohit doubled up in Ranchi, to become the third double-centurion in the series for India, surpassing 500 runs for the series. He also took his batting average at home up to 99.84, just above Don Bradman’s 98.22.

Shining alongside him were Ajinkya Rahane, who brought up his first hundred at home since 2016, Ravindra Jadeja, who added a second half-century at No.6 and Umesh Yadav, whose 31 off 10 balls allowed Virat Kohli to declare in time to let India’s quicks loose on South Africa’s openers.

Mohammed Shami and Yadav only got an over each in fading light but bounced out South Africa’s openers to put the visitors under pressure immediately.

India had the luxury of allowing their quicks to go full tilt for a short spell, having declared with a session in the day, but knowing the weather would allow for much less. Shami and Yadav hit the deck hard and seemed to catch Dean Elgar and Quinton de Kock by surprise. Both gloved behind, Elgar off a Shami delivery that found extra bounce and de Kock to a Yadav snorter that climbed on him steeply.

And those losses might well be the least of South Africa’s problems.

On a dry surface, debutant Shahbaz Nadeem has already extracted more turn in two overs than South Africa’s spinners did in almost two days, and R Ashwin has yet to get going. The upside is that there’s an opportunity for some of South Africa’s bench to come good. Zubayr Hamza is batting at No. 3 and Heinrich Klaasen at No. 6, and we don’t need to go over how important it is for Faf du Plessis and Temba Bavuma to score runs.

If they’re looking for an example of how to do it, they need look no further than the opposition. Rohit paced his innings perfectly, seeing off the more testing spells from Kagiso Rabada, and then cashed in on South Africa’s weaknesses. Lungi Ngidi, playing his first Test in the series, struggled with his lines and often strayed on to the pads, while Dane Piedt, brought back into the XI, bore the brunt of Rohit’s aggression. Piedt has now conceded the most sixes in a series, a grand total of 20, and appears nowhere near the bowler that dominated the domestic franchise system at home.

At the other end, Rahane barely put a foot wrong, scoring runs all around the field, particularly in the oft-vacant third-man region, and put right a home record that was crying for some beefing up. The Rohit-Rahane partnership swelled to 267, by far the highest fourth-wicket stand for India against South Africa.

The trouble for South Africa is that India’s attack doesn’t offer the freebies Ngidi and Piedt did, so they will have to grind a lot more, which may not be possible on a surface that will deteriorate.

George Linde showed there is already something for the spinners and he got something out of the footmarks outside Ravindra Jadeja’s offstump. Linde was the most impressive of the South African bowlers on the day, taking four wickets, including those of Rahane and Jadeja, and controlled his end better than South Africa’s spinners have done so far.

None of the Indian batsmen will be too unhappy, especially not Jadeja, who has handled the promotion to No. 6 well. He shared in a 64-run fifth-wicket stand with Rohit and 47-run fifth-wicket partnership with Wriddhiman Saha. But the fun came after Jadeja was dismissed and Yadav arrived with a license to thrill. He hit five sixes off Linde in a 10-ball 31, and fast-forwarded the declaration.

It came after India scored 273 runs in 58.3 overs on day two, at a run rate of 4.67, and their willingness to call time on their innings early shows just how dominant they have been. They have outplayed South Africa in all departments and can sniff a strong finish.