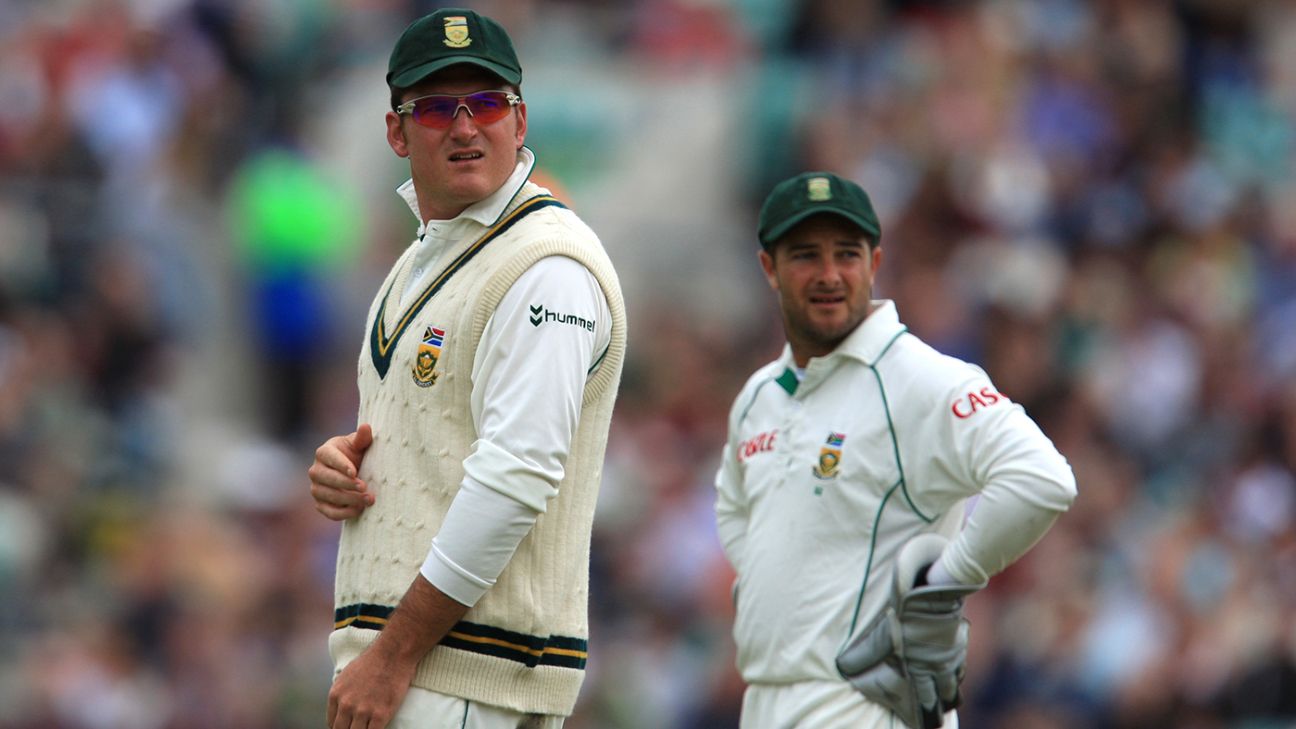 Graeme Smith, South Africa’s acting director of cricket, has chosen “hardened, experienced” former team-mate Mark Boucher as coach of the men’s national side until the 2023 World Cup. Enoch Nkwe, the interim team director (a term that has now been scrapped), has been appointed Boucher’s assistant for the same period while former convenor of selectors Linda Zondi has been brought back until April 2020 and Ashwell Prince will coach the South African A side.

Boucher, Zondi, Nkwe and Test captain Faf du Plessis make up the selection panel for now, whose first task is to choose the squad that will face England in a home series starting on Boxing Day. The squad for the first two Tests will be announced on Monday, before the Mzansi Super League final. A batting and bowling consultant will also be finalised in the coming week.

The radical changes to the South African national structure were made in the last four days after Smith accepted the director of cricket position in a temporary capacity on Wednesday. Smith has signed a three-month contract after which he has a commentary stint at the Indian Premier League and confirmed to ESPNcricinfo that he would then consider a more permanent deal with CSA.

Smith’s appointment comes after more than three months of negotiation, during which time he withdrew his interest before being re-engaged following the suspension of CSA CEO Thabang Moroe. While Smith confirmed he still has “no relationship,” with the under-pressure CSA Board, he explained that the changes in the CSA executive administration played a major part in his accepting the role.

“I didn’t have a lot of confidence in the leadership of CSA,” Smith said. “With such an extensive job description, I didn’t feel I could achieve in the role with the leadership that was there at the time. You need a robust CSA to be able to challenge each other, you need trust and you need to have an environment that was ready for that, and I didn’t feel the environment was ready before I took this job.

“If I am going to come in, I want to be able to do the best that I can do. I feel that is slightly better now. The opportunity is there. I have got a lot of confidence in Jacques [Faul] as the CEO.”

“I am very aware of transformation. I led my the country for 11 years and I had to be very much a part of managing those processes.”

Faul has also been appointed in an interim capacity for the next six months while Moroe undergoes a disciplinary process. With Smith making clear his allegiance, it would appear his future involvement with CSA is tied to Faul’s and will be decided as the summer ends. Similarly, the position of Zondi, whose short-term contract was a result of what Smith called “a budget thing”, will also be up for discussion when the 2019-20 season is over.

However, the positions of Boucher and Nkwe are confirmed until after the 2023 World Cup, a decision that aims to provide both expertise and continuity for the national side. “I felt at this stage, the Proteas needed a really hardened, experienced international guy,” Smith said. “I feel that Mark, from a cricket perspective, is very knowledgeable. He is tactically very knowledgeable. We all know what qualities he has as a man as well. I felt those were the decisions best needed for the current Proteas set up.”

Smith indicated the long-term plan would be to prepare Nkwe to take over from Boucher in the future. “We have had a couple of chats with Enoch in terms of his pathway going forward and developing him as a high-standing international coach. We feel he has got a lot of qualities that will be very useful to Mark and that will help him progress in international cricket.”

Asked whether the demotion of Nkwe, South Africa’s first black African coach, and the appointment of Boucher above him could be seen as a whitewash, Smith disagreed. “My job is to create cricket excellence. I feel I have made the right decision for the Proteas. I think for Enoch’s future as well it is the right appointment. We need to think about managing people sometimes and not just a number,” Smith said. “I am very aware of transformation. I led my the country for 11 years and I had to be very much a part of managing those processes. A number of discussions need to happen behind the scenes but I disagree with the statement [that it’s a whitewash].”

Smith is also still in discussions with CSA around the transformation targets and the policy going forward but for now wants to focus on getting the South Africa team back on stable ground following a rocky 2019. South Africa lost five successive Tests, including a home series in Sri Lanka and a 0-3 defeat in India, where Smith indicated off-field problems appeared to bleed onto the field. “The disappointing thing has been how South African cricket has been run of late. That has been the most challenging aspect. That’s filtered into the environment and made life difficult for the guys that have been in that position. Hopefully in the short term we can turn it around.”

For Smith, it is key to “bring leadership back into the game”, which can be provided by former internationals. Smith singled out Prince’s involvement with the A side as particularly important. “I am very happy that we have Ashwell involved. He has got a lot of international experience, he is a hardened international cricketer. He is full of opinions which we love,” Smith said. “The A side needs to be the second-best men’s team in the country.”

If Smith takes on the role post the IPL next year, his job will include developing a strategy that will include the A side, looking at the domestic structures, the Under-19 side, the women’s game, and even cricket at grassroots level. For now, Smith’s sole focus is the national men’s team and the England series and creating the blueprint that will put South Africa on a path to success.

“We want the Proteas to play well and start winning again. Faf is happy that there is a bit of leadership around. Both him and Enoch have had very frustrating times over the last period. There has been almost no communication with them [from CSA] for a lengthy period of time. I’m glad we were able to come in and provide some direction for them,” Smith said. “Hopefully we can take away some of the drama from them and Faf and the team that is selected can focus on playing cricket and doing the job well. That’s what’s expected of them. It’s going to be our responsibility to clean up the rest.”