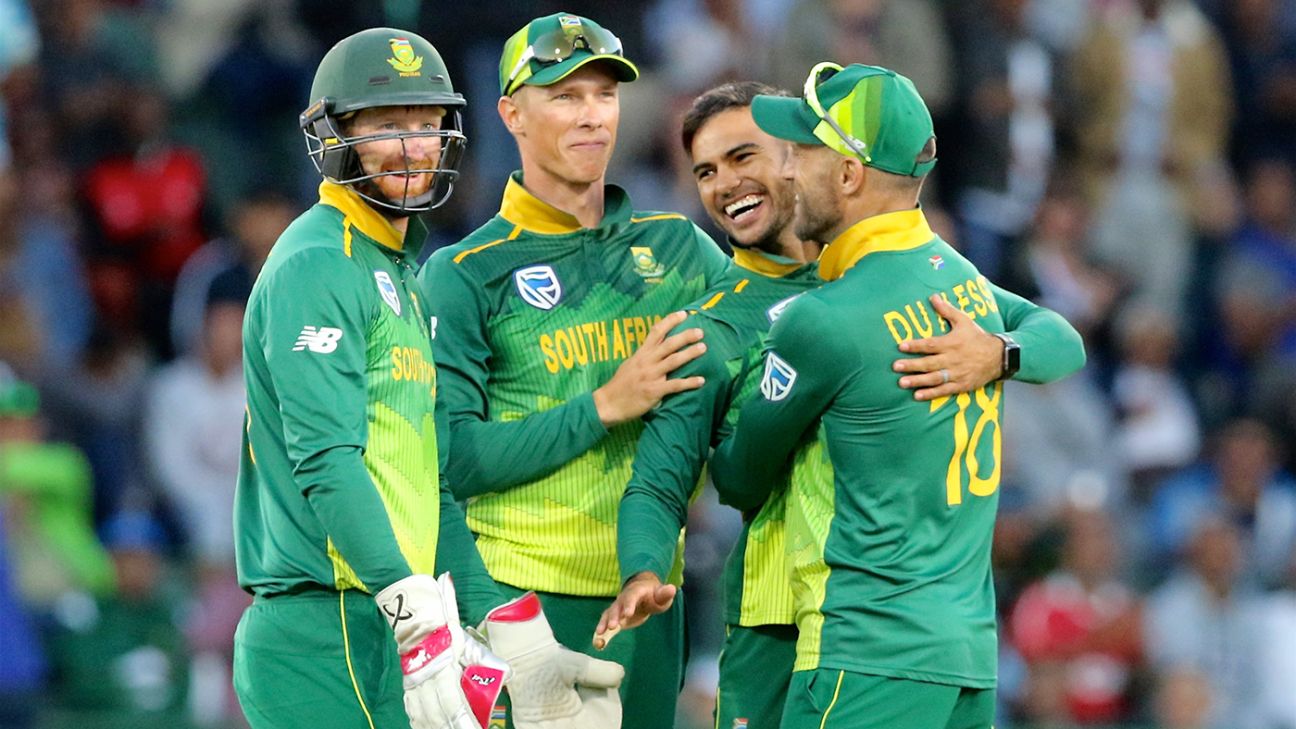 The result of the Test series may be as disappointing for Mickey Arthur as it was gratifying for Otis Gibson, but in a World Cup year, it is the limited-overs results that will truly stand out. To that end, South Africa, desperate to finally snap their global tournament jinx, made an inauspicious start to their year, falling to a defeat they primarily owed to their own batting conservatism. It gave Pakistan, far better suited to the Port Elizabeth pitch than the hosts, the chance to break their duck on tour, condemning South Africa to their fifth ODI defeat in six matches between the two teams.

It is an odd defeat for South Africa to analyse, particularly given the batting scorecard, and the positives to be drawn from it. Hashim Amla roared back to form with a classy hundred, while Rassie van der Dussen enjoyed an excellent debut, pacing his innings better than any of his counterparts. As far as the bowling went, Imran Tahir was perhaps slightly removed from his brilliant best, while the faster bowlers were never likely to enjoy much assistance from the Port Elizabeth surface.

Faf du Plessis and his men will be likelier to find Durban more conducive to their skillset, though by no means is it as quick and bouncy as the ones in Centurion and Johannesburg. The increased pace and bounce it offers compared to Port Elizabeth will buoy Kagiso Rabada and Duanne Olivier plenty, with Pakistan, who never themselves looked like taking too many wickets, also challenged to raise their game.

Pakistan couldn’t have asked for a better start to the series, eager for a clean break from their ODI form in 2018, where they began the year with a whitewash suffered against New Zealand and finished with just one top eight win all year. Having matched that number in just one game, they will feel eager to move into a commanding position in the series at a ground where they have won their last two ODIs against South Africa.

Mohammad Hafeez hitting the ground running allows Pakistan to balance their side once more, with the allround ability of Imad Wasim, Shadab Khan and Faheem Ashraf meaning they bat far deeper than their Test match side. Fakhar Zaman missing out in Port Elizabeh will have frustrated them, but Imam-ul-Haq’s return to form was timely, while Shadab Khan and Hasan Ali never allowed South Africa to get away in the first innings. There might still be plenty Pakistan have to work on, but reassuringly, there’s a lot they have to work with.

For all of their brilliantly skilled batsmen and raw, fierce pacers, Imran Tahir could be the singular factor that helps South Africa break their World Cup duck in England. Without question, this is the biggest year of his career, his last realistic chance at a World Cup. It is a career that began in Pakistan over two decades ago, and while it has been a glorious success, it still requires a defining moment of fulfillment. Playing against the country he grew up wanting to play for, he hasn’t quite enjoyed as much success in South Africa as in the UAE. But here in Durban, he will have a better chance of success than when the series moves to Cape Town and Gauteng. His ODI average against Pakistan is 28, four runs up from his career average of 24. But in this of all years, against this of all teams, Tahir will be desperate to raise his game, and if there’s one player in world cricket who can make things happen by sheer force of will, it is the South African legspinner.

Pakistan’s victory masked somewhat Sarfraz Ahmed‘s continuing struggles in the two longer formats. Two half-centuries in the Tests have been blighted by what are now five single-digit scores on this tour. He has now been captain for precisely one third of his ODI career – 33 out of 99 matches. In that time, he averages 26.46 with the bat; he had averaged a shade under 35 when appointef. He has scored just 3 half-centuries as captain, only once in a winning cause, and surpassed 30 just once more. As evidence of his dwindling influence with the bat, Sarfraz has – in 17 of those 33 matches – either not come out to bat at all, or remained unbeaten on a score under 25. With the World Cup approaching, Pakistan cannot afford to be carrying any passengers, and Sarfraz will know that better than anyone else when he steps out.

South Africa are still without Dale Steyn and Quinton de Kock, which means Heinrich Klassen will continue in the keeper’s role, with not too much alteration expected in the bowling department. Tabraiz Shamsi may come in if the hosts feel an extra spinner may help them on the surface, while Aiden Markram, who sat out of the first game, is an option replace Reeza Hendricks.

Pakistan are likely to field the same side for the second ODI.

It was suggested the ODI pitches may have less spice than the ones in the Tests, but even so, Durban does tend to keep the quicks interested. With the ground so close to the ocean, conditions can often be impacted by the tides. What appears certain is it will interest spinners more than the pitches the remaining three ODIs will be played on.