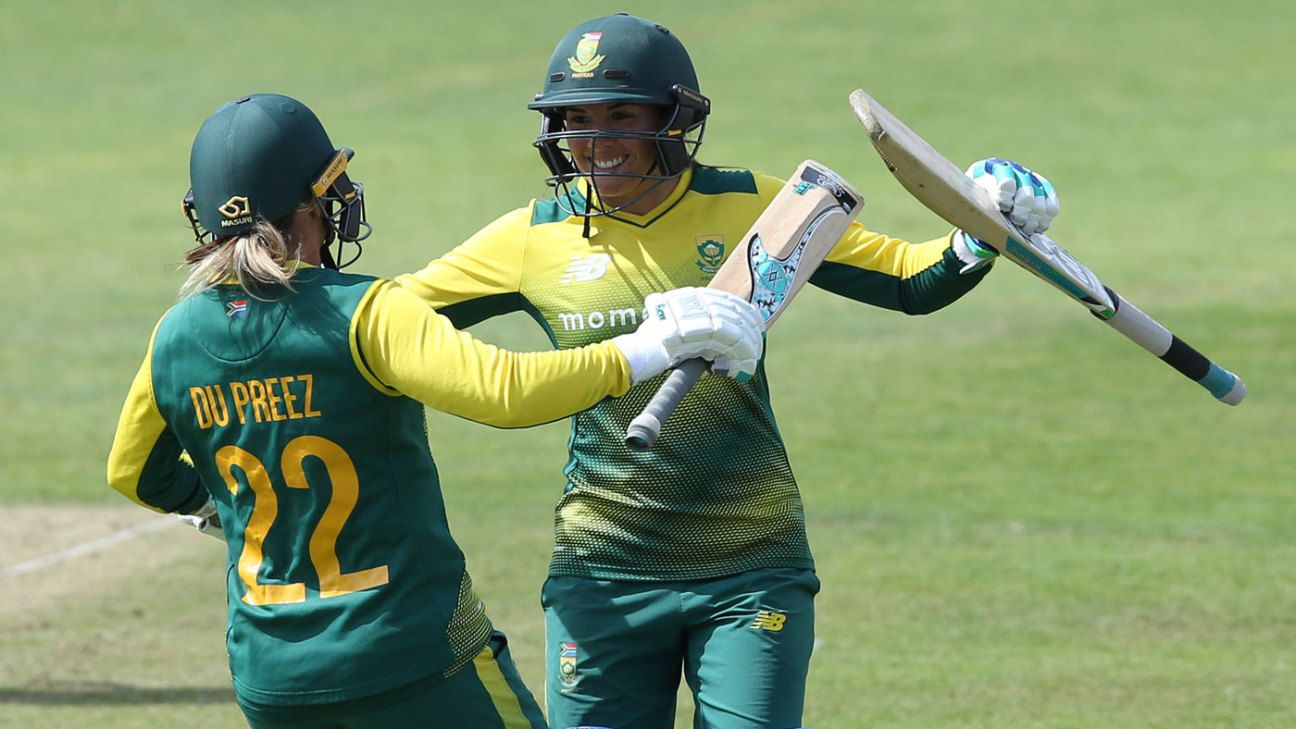 Allrounder Sune Luus has been dropped from South Africa’s ODI and T20 squads to face Sri Lanka next month. Laura Wolvaardt also misses out from the squad that took part in the World T20 two months ago, while Trisha Chetty is yet to recover from injury. Offspinner Raisibe Ntozakhe‘s bowling rehabilitation also continues and she is not ready to be considered for selection.

In place of the dropped players, Faye Tunnicliffe, Tazmin Brits, Nadine de Klerk and Lara Goodall return to the set-up for the three T20Is against Sri Lanka. Saarah Smith also makes a return after recovering from a fractured finger suffered during the World T20.

While Wolvaardt has been retained for the ODI series, Andrie Steyn, Goodall and Tunnicliffe have been included ahead of Luus and the still injured Chetty as South Africa look to add six vital points towards their 2021 ICC Women’s World Cup direct qualification campaign. Fast bowler Ayabonga Khaka is still in the midst of her shoulder surgery rehabilitation programme and was not considered for selection.

Shortcomings in South Africa’s batting were the focal point of a disappointing World T20 campaign in the Caribbean, and convenor of selectors Clinton du Preez said the new selections were a result of the debrief that followed the tournament.

“Looking into the upcoming Sri Lanka series, we as selectors did a debrief of the World Cup and looked at certain areas that we need to strengthen and looked at different options that will impact the game,” du Preez said.

“The likes of Tazmin Brits and Nadine de Klerk could really make an impact on the middle order, the two of them have had a really good provincial season thus far. Saarah Smith coming back from injury as a batter who can add some spin value to the team is something we’re looking forward to and in the 50-over format, Andrie Steyn is coming in on the back of some good innings at provincial level. It’s good to see that we are retaining the core of our players within the squad and are also giving the opportunity to some younger players.”

Following on from the World T20, Luus and Wolvaardt are both members of the Brisbane Heat squad that has reached the final of the WBBL this season. While Wolvaardt has retained her place in the South African one-day side to face Sri Lanka, Luus won’t be back until the series against Pakistan at the end of the summer.

“Sune Luus unfortunately misses out on the back of some disappointing performances,” du Preez said. “We’re looking forward to seeing how she comes back, she can still add a lot of value, she needs a bit of work with the necessary coaches just to make sure that we get her back to speed (with the bat in hand). Her bowling obviously plays a massive role, so we would need to see how she comes back after playing a few provincial games and preparing for the Pakistan series.”

Western Province’s Goodall has not seen international action since taking part in the ICC Women’s World Cup Qualifiers in early 2017, but her efforts over the past two seasons for her province, in the National Academy as well as the South Africa Emerging team have convinced the selectors to give her another call-up as they begin the search for the 2020 ICC T20 World Cup squad. Brits and de Klerk’s last international appearances were in June and February 2018 respectively, the latter taking the remainder of the year off to complete her matric studies.

“For now, it’s important that we focus and we plan for the upcoming T20 World Cup next year and also the one in 2022 and in between that, we have the 50-over World Cup,” du Preez said. “Our focus needs to be on both formats.”

Starting on 1 February, Sri Lanka’s visit will include three T20Is and three ODIs across four venues. The squad will gather for a pre-tour camp from Saturday 26 January in Cape Town.