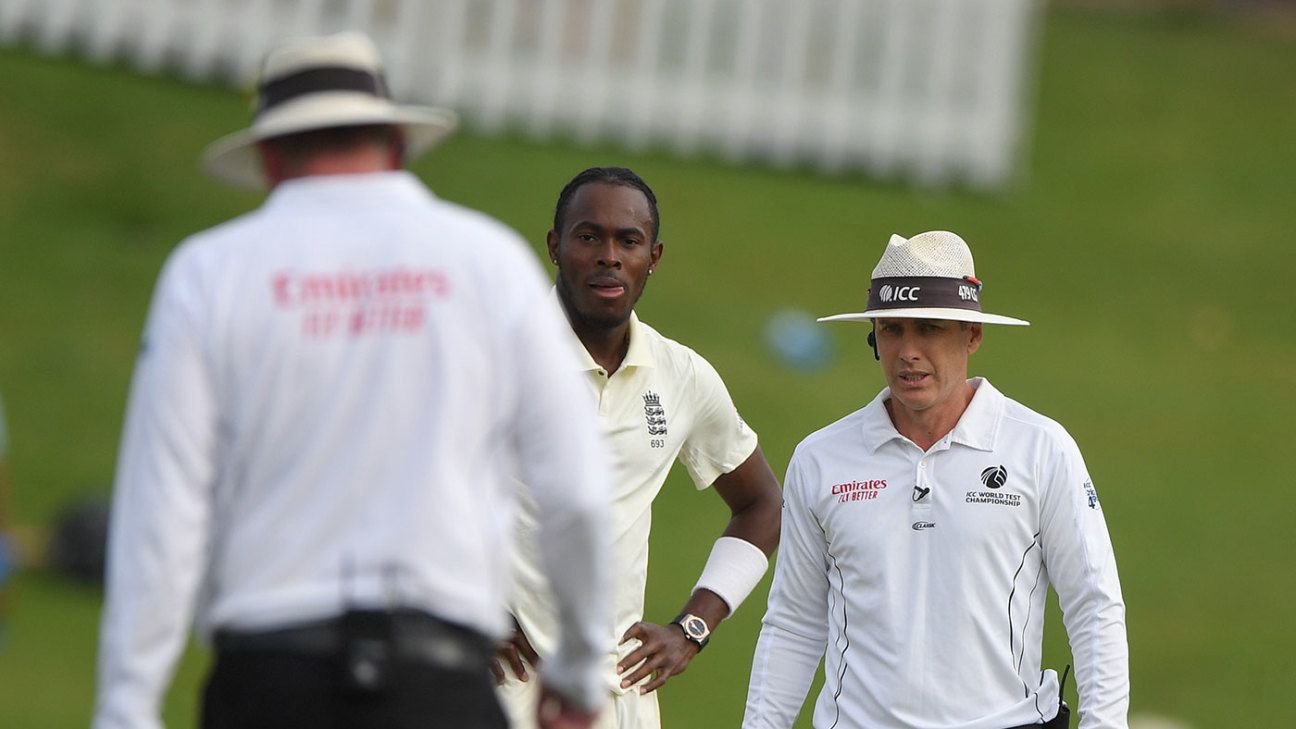 Vernon Philander has called on the umpires to “stand your ground” and withdraw Jofra Archer from the attack in the first Test in Centurion.

Archer, the England fast bowler, appeared to be called for a second no-ball by the square-leg umpire Paul Reiffel after ending his day with a pair of beamers. While there is no doubt both deliveries were unintentional – replays suggested Archer had attempted to bowl two successive knuckle-balls – clause 41.7 of the ICC’s Test playing conditions dictate that any bowler who has delivered two such balls should be suspended from bowling for the rest of the innings.

But the umpires also appeared to rescind the no-ball call on the basis that the second delivery was dipping towards the stumps and should be considered more of a full-toss than a beamer.

That left the South Africa camp incensed. The captain and coach, Faf du Plessis and Mark Boucher respectively, could both be seen seeking clarification from officials the moment play ended – the incident occurred in the penultimate over of the day – and Philander, the South Africa all-rounder, suggested the umpires should be “setting an example” in order to maintain standards in “the purest format” of the game.

“If you’re at square-leg and you call no-ball you’ve got to stand your ground,” Philander said. “At no time did they actually cancel it.

“For me it’s plain and simple: we’re playing a game and we’re setting an example for the rest of the people coming into this game. You’ve got to make the right call.

ALSO READ: The stats stack up as Philander approaches his endgame

“That’s why it’s called the purest format. Are we going to tolerate it at another game or are we going to put a stop to it right here? It’s in the hands of the umpires.”

Unsurprisingly, Joe Denly, the England batsman, saw the incident quite differently. While he accepted the first delivery was indeed a beamer, he insisted the second passed just over the stumps as the batsmen ducked and was nothing more than a full-toss.

“I was at leg slip and I wasn’t expecting two beamers,” Denly said. “The first one fair enough. The second one just missed the stumps.

“I saw the umpire put his arm out and I think he tucked it in quite quickly. They withdrew that second no-ball.”

Denly’s version of events – at least as regards the umpires’ decision – would appear to be borne out by events. The final ball of Archer’s over was not bowled again, as would have been necessary had it been ruled a no-ball, and at no point did the umpire at the bowler’s end, Chris Gaffaney, make the no-ball signal.

Replays suggested such a call on the second delivery was very tight, with the ball dipping towards the bails having passed the batsman at close to shoulder height. Either way, Philander had little sympathy for Archer, suggesting he should not have attempted such a tough delivery to execute in such a situation.

“Don’t try silly things that can cost you bowling another ball in the innings,” Philander said. “The umpires have to make a call and hopefully it’s the right one for the game looking forward.”

ICC playing conditions on the issue state: “Any delivery, which passes or would have passed, without pitching, above waist height of the striker standing upright at the popping crease, is to be deemed to be unfair, whether or not it is likely to inflict physical injury on the striker. If the bowler bowls such a delivery the umpire shall immediately call and signal No ball.

“If, in the opinion of the umpire, such a delivery is considered likely to inflict physical injury on the batsman by its speed and direction, it shall be considered dangerous. When the ball is dead the umpire shall caution the bowler, indicating that this is a first and final warning.

“Should there be any further instance (where a dangerous non-pitching delivery is bowled and is considered likely to inflict physical injury on the batsman) by the same bowler in that innings, the umpire shall: call and signal no-ball [and] direct the captain of the fielding side to suspend the bowler immediately from bowling. The bowler thus suspended shall not be allowed to bowl again in that innings.”