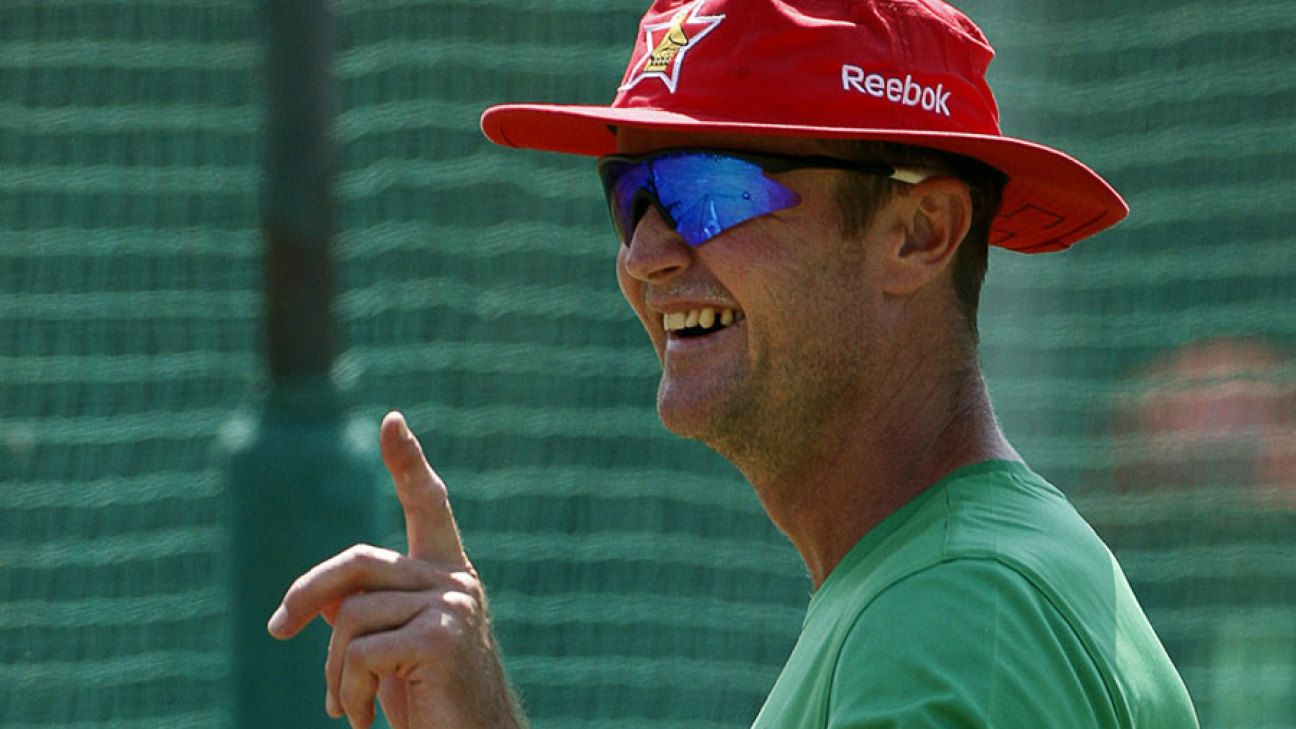 Former Zimbabwe batsman Grant Flower believes Zimbabwe Cricket’s perpetually crisis-ridden state might have contributed to the ICC’s decision to suspend them. The drastic decision, which immediately froze all payment to Zimbabwe Cricket and barred the nation from participating in ICC events, took many by surprise, particularly since this was the first time a Full Member had been sanctioned in this manner.

Flower, however, believes their lamentable track record, as well as the glacial rate of progress despite the ICC ploughing bail-out cash into the board over the years, had counted against them.

“I can understand the player’s frustrations, but unfortunately with Zimbabwe cricket, it sounds like the ICC have just had enough,” Flower told ESPNcricinfo. “Regarding money owed and money lent, and money the ICC gave Zimbabwe that they’re probably never going to see again, it sounds like maybe they’ve run out of patience.

“I think over time, the ICC have just been worn down by all the corruption, the fraud, and the problems with Zimbabwe cricket not being able to get its house in order. Maybe they thought a jolt to their system would make some people realise what was expected of them. They would have reasoned Zimbabwe needed to understand that at some stage, you’ve got to put your house in order, and we can’t keep propping you up like we have been doing over the years.

“We can go back so many years to when things were very badly run. It’s pretty obvious what was happening at the time and the people responsible who were involved. And I think the current crop of players and the interim board, who are really good people, are being punished because the ICC felt they needed to take a stand.”

ALSO READ: ‘Do we just burn our kits and apply for jobs?’ – Sikandar Raza

The most ironic, and from a Zimbabwean point of view, frustrating, point in this state of affairs is the timing of the suspension. In September 2018, former Olympic swimmer and Zimbabwe’s most famous sportsperson Kirsty Coventry was appointed minister of Sports and Recreation Committee (SRC). Under her stewardship, there was a belief that a corner had been turned, and that Zimbabwe Cricket would benefit from the increased accountability the revamped SRC was expected to deliver. It was a point Flower accepted and said both the timing of the decision, as well as the consistency with which it was applied across the cricketing world, didn’t quite add up for him.

“My understanding is the SRC is a public body and not exactly government,” he said. “I think there’s quite a big difference there and I’m surprised the media hasn’t picked up on that. The SRC now is slightly more transparent. I don’t know all the members, but I do know Kirsty Coventry and she’s a good lady, a good person. And a few other people that are involved in it you could say the same of. So if you got someone at the top like Kirsty there, her hands might be tied in a lot of places, but there should be more good things happening than bad.

“Regarding government intervention, it’s curious how the ICC have decided to interpret that. There are other countries where it’s publicly stated that some of the times that certain things will be discussed and decided at government level. So I think there’s quite a big contradiction there from the ICC.”

Zimbabwe cricket isn’t a stranger to deep crises. Flower played a part in arguably the gravest one of all, when in 2004, he, along with 14 other white cricketers, walked out on Zimbabwe cricket after captain Heath Streak was dismissed following a disagreement over the squad’s re-selection based on what Streak interpreted as unofficial racial quotas. It saw 21-year old Tatenda Taibu become captain, and an inexperienced side suffer a drastic downturn in results. One year later, they would withdraw from Test cricket for over half a decade.

Flower believed this particular bind was even graver, especially because it effectively prevented Zimbabwe from playing cricket altogether. “Even when we were leaving, there were a good bunch of youngsters coming through that could get the country’s cricket going. But that’s not the case anymore, with even the domestic competitions unable to take place. For it to be stopped until October at the very least, the guys are probably going to go and play in the leagues, seek a future elsewhere to try and look after their families, So yeah, I certainly think this is far worse.”

An impending exodus threatens to plunge Zimbabwe cricket into further turmoil. Solomon Mire has already announced his retirement, while Sikandar Raza hinted at it in a post on Twitter and interview with ESPNcricinfo. Kyle Jarvis wryly noted that “we are not far behind you” in response to Mire’s decision to quit, while, with no money to pay players, administrators and groundstaff, a secure future with the international side looks next to impossible. Flower said it was a harsh lesson Zimbabwe were learning, and hoped there could be a favourable resolution to the dispute in October.

Been a pleasure playing alongside this man over the last couple years . Enjoy retirement @kingsoly21 seems we are not too far behind you pic.twitter.com/TucyYeWwnd

“The scapegoats are the players and some of the good administrators. I saw this thing on Twitter about Harare Sports club, it’s a beautiful ground and at the moment it’s just going to waste because no one is being paid and the staff have left. It’s publicly owned by Harare Sports Club and the upkeep is paid for by Zimbabwe Cricket so unfortunately those sorts of things may just go to ruin.

“It is a sad day, and maybe some of the players are going to move on. Most of the players are still quite young, like Brendan Taylor and Kyle Jarvis, who left their county to return to Zimbabwe. They could still ply their trade elsewhere; it’d be a pity it won’t be for their country of birth.

For those players with no offers abroad and the hundreds of non-cricketing staff that ZC employ, even that’s barely a guarantee.