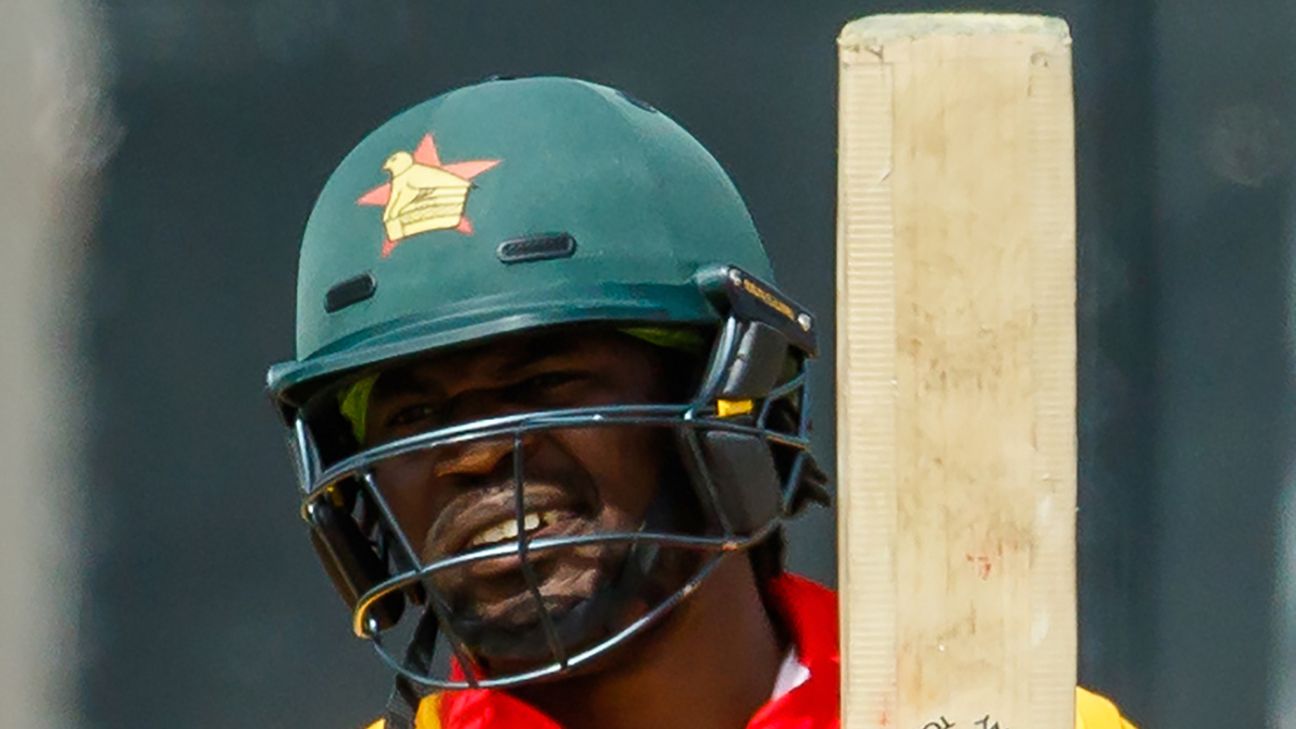 Zimbabwe allrounder Solomon Mire has announced his decision “to retire from Zimbabwe Cricket in all formats with immediate effect”.

“It is unfortunate and untimely however to leave under the current circumstances that are out of my control but i have decided to take a step in a new direction,” Mire said in a statement released via his personal Instagram feed.

“Representing my country at the highest level for me has been the highest honour and service i could ever give and I have been extremely privileged to have been afforded the opportunity,” Mire wrote. “My short career has been a roller coaster of highs and lows, stops and starts, frustrations and joys but will be one I shall look upon and cherish for the once in a lifetime opportunity I was lucky enough to experience and for that i would like to express my gratitude.”

Mire, 29, played two Tests, 47 ODIs and nine T20Is for Zimbabwe, scoring one century and five fifties across formats, and taking a total of 14 wickets with his bustling fast-medium seamers. His top score of 112 came amid Zimbabwe’s historic series win over Sri Lanka in 2017, helping the team chase down Sri Lanka’s 316 for 5 with almost two and a half overs to spare – a record for the highest successful chase on Sri Lankan soil.

While he never quite fulfilled his undeniable promise as a devastating batsman in white-ball cricket, Mire also currently holds the record for the highest score for Zimbabwe in a T20I for the 94 he scored against Pakistan last year.

While he made an impression in Zimbabwean domestic cricket while still a teenager over a decade ago, It was Mire’s big hitting in Australian Grade Cricket that brought him to the attention of the national selectors. He made community paper headlines in July 2014 when he slammed a 157-ball 260, including 21 sixes, for Waratahs to set a new tournament record in the Darwin and District Cricket Competition. His exploits for Essendon in the Victoria Cricket Association Premiership had also led to a game for Victoria Under-23s, and then a handful of games for Melbourne Renegades in the Big Bash League in 2013-14 as a community rookie.

“My short career has been a roller coaster of highs and lows, stops and starts, frustrations and joys but will be one I shall look upon and cherish.”

Zimbabwe eventually came calling, and Mire cobbled together a pair of fifties in unfamiliar conditions in his debut series in Bangladesh in late 2014. He’d done enough to earn a place in Zimbabwe’s 2015 World Cup squad, with his experience of Australian conditions also adding to his value, and had been a regular in Zimbabwe’s squads since then.

Mire thanked the various clubs and coaches in Zimbabwe and Australia that played a part in his development as a player, as well as his sponsors. “Also a special thanks to the fans,” he added. “I can hardly believe that I had fans from across the world, I’m sure most were friends and to the ones I’ll never meet, thank you all so much.

“I can say without a doubt that sport and in particular international cricket will always be my biggest lesson in life. Ever.”

Mire informed his Zimbabwe team-mates and the national technical staff of his decision to retire after the recent tour of Ireland before going public with his announcement. With Zimbabwe currently under suspension by the ICC, more of those team-mates could soon follow him into international retirement.

“Been a pleasure playing alongside this man over the last couple years,” Kyle Jarvis tweeted. “Enjoy retirement @Kingsoly21 seems we are not too far behind you.”