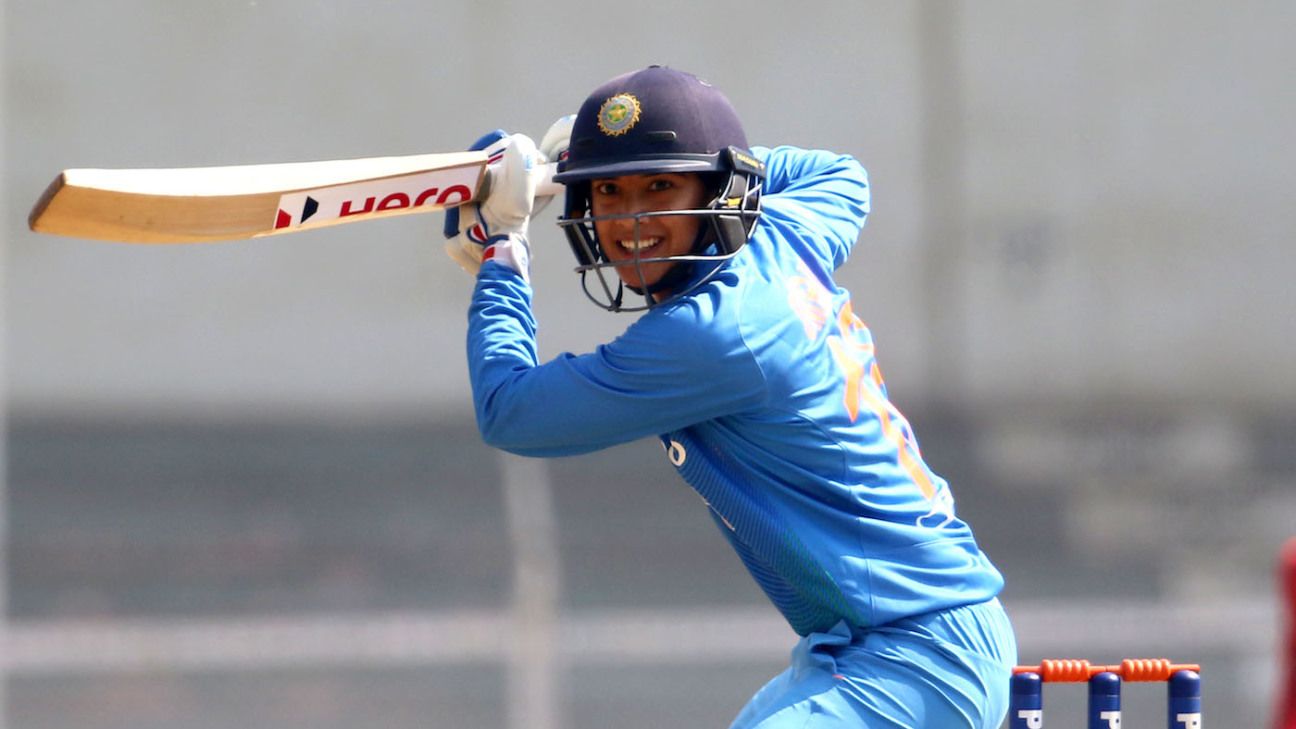 India opener Smriti Mandhana has become the second winner of the Rachael Heyhoe-Flint Award after being adjudged the ICC Women’s Cricketer of the Year for 2018. Mandhana, the leading run-getter in women’s ODIs with 669 runs at an average of 66.90 and the third-highest scorer in T20Is with 622 runs at a strike-rate of 130.67, has also been named the ICC Women’s ODI Player of the Year.

The T20I honours went to Alyssa Healy, who was Player of the Tournament during Australia’s run to their fourth Women’s World T20 title in the West Indies, where she made 225 runs at an average of 56.25 and a strike rate of 144.23.

Mandhana, 22, is only the second Indian woman to win an ICC award. The fast bowler Jhulan Goswami was named the ICC Women’s Player of the Year in 2007. Australia allrounder Ellyse Perry was the inaugural recipient of the Rachael Heyhoe Flint Award last year.

“The awards are pretty special because as a player when you score runs, you want the team to win, and then when you get acknowledged for your performances through these awards, it motivates you to work harder and do well for your team,” Mandhana told icc-cricket.com.

“The century I scored in South Africa (in Kimberley) was quite satisfying and then I had good home series against Australia and England. A lot of people used to say I do not score that much in India, so I had a point to prove to myself. That was something which really made me better as a player. And then, of course, the first four matches of the ICC Women’s World T20 were quite memorable.”

Healy, meanwhile, enjoyed a memorable year in T20s even outside her World T20 heroics. Having begun her year with a maiden WBBL hundred and a maiden international century within the space of three months, the wicketkeeper-batsman finished fourth on the T20I run-getters list in 2018 behind New Zealand allrounder Suzie Bates, India T20I captain Harmanpreet Kaur, and Mandhana.

“It’s obviously a huge honour,” the 28-year-old Healy said. “I enjoyed some form over the last couple of months, thoroughly enjoyed playing for the Aussie team in the T20I format. Winning the ICC Women’s World T20 final against England is something pretty special, especially after a disappointing couple of years in World Cups. That win against them, a dominant performance, was pretty special and one I will never forget.

“When I first started playing for Australia I never thought that I would achieve anything like this. It’s a huge honour and one that I will not take lightly.”

The 19-year-old England left-arm spinner Sophie Ecclestone has been named the Emerging Player of the Year. She took 18 wickets in nine ODIs and 17 in 14 T20Is during the calendar year. She was part of the squad that finished runners-up at the World T20.

“There have been lots of great moments,” Ecclestone said. “As a team we’ve played some really good cricket and we did well to reach the final of the ICC Women’s World T20. We learned a lot in India at the beginning of the year and we took that into our summer against New Zealand and South Africa. We’ve never said we’re the perfect team but we’ll keep working hard to get better and that’s the same for me.”

The ICC also named Bates and Harmanpreet the captains of the women’s ODI and T20I teams of the year.

Harmanpreet, 29, led India to their first semi-final appearance in the World T20 since the 2010 edition, but was involved in a public fallout with the ODI captain Mithali Raj after the team’s exit. Harmanpreet said the award would help build her confidence in the role.

“BCCI is showing confidence on me – that I can do well in the format and I am looking forward to do well in the future,” Harmanpreet said. “To be honest, it was really surprising for me. The last two years we did not get enough T20I matches to play and it was really tough for me to build that confidence in the team and show that self-belief that we can do well in T20Is. Credit goes to all team members, the way they worked hard and show that self-belief.”

Bates, meanwhile, stepped down from the captaincy ahead of the World T20, handing over the reins to Amy Satterthwaite. Bates had led New Zealand to second place in the second cycle of the ICC Women’s Championship after three rounds.

“Thank you very much to everyone who voted for the ICC team of the year,” Bates said. “To be named captain is just an absolute honour. Obviously, I have been playing for a long time and stepped down from captaincy, but to be named captain of a World XI is pretty special and something I will always remember.

“It would be nice one day if we got together to play as a group and to captain some of the superstars, but once again such a huge honour and congratulations to all the award winners for this year.”