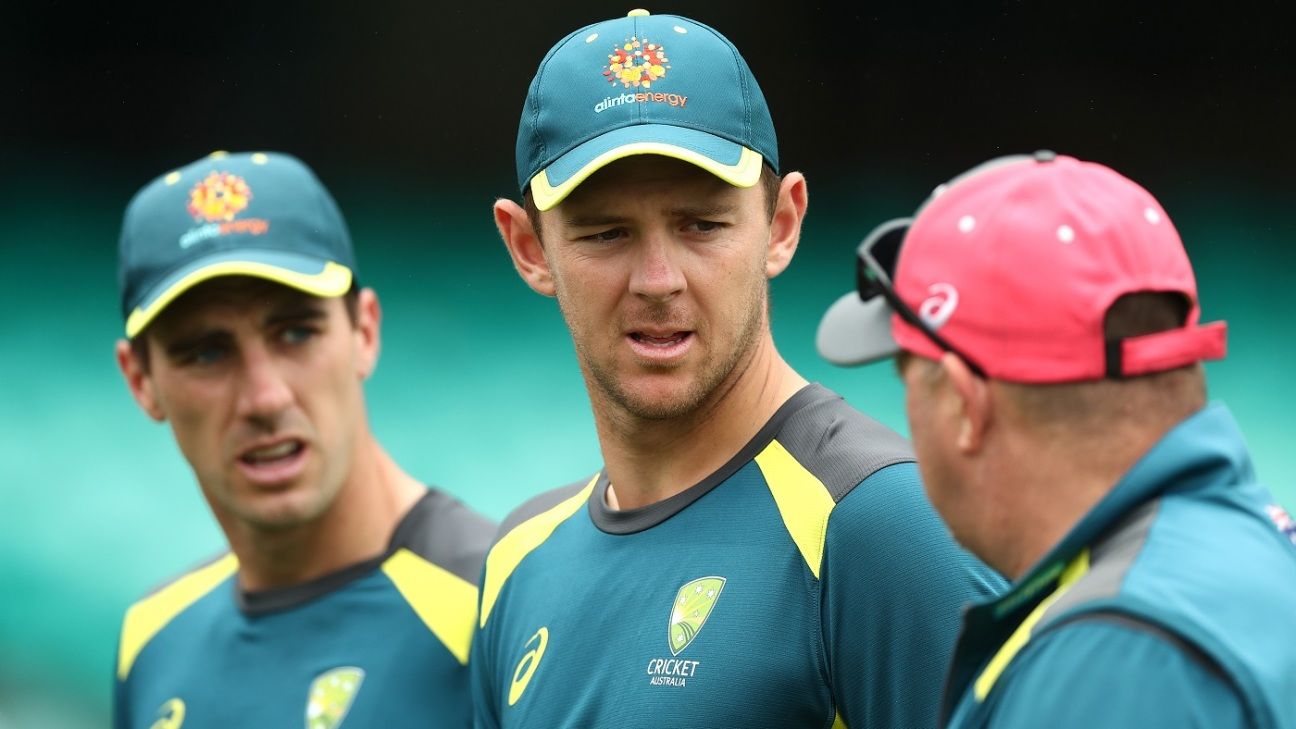 Even as he conceded that he had no idea whether he would be reconsidered for Australia’s vice-captaincy, injured fast man Josh Hazlewood has declared that perhaps the biggest gap caused by the bans on Steven Smith and David Warner was the absence of first-hand experience and advice for the group of young batsmen cycled through Test series against Pakistan, India and Sri Lanka.

Neither Shaun Marsh nor Usman Khawaja are universally regarded as seniors, according to Hazlewood, and his comments reflected the fact that advice provided exclusively by coaches was unable to get any further than the boundary’s edge. Hazlewood said that the likes of Marcus Harris, Travis Head and Marnus Labuschagne, all new batsmen in the Test side, suffered for the lack of guidance at the other end from players who had found ways to be consistently high scorers at Test level.

While the aforementioned trio looked the part at times throughout the summer, it was not until the final match of the home Test calendar that any batsman reached three figures. Khawaja, his season interrupted by a knee injury, did not reach the milestone until his final innings in Canberra, and Marsh was dropped after an underwhelming run of innings against Pakistan and India.

“It’s probably been the first time when you’ve had the top six with no real senior batsmen to feed off, I guess, around training and games, so they [the newcomers] have had to do all their learning from the coaches”

HAZLEWOOD ON THE ABSENCE OF SMITH AND WARNER

“Every time Steve goes out to bat, he pretty much gets a hundred these days, so the time with the feet up is pretty important [for the fast bowlers],” Hazlewood told ESPNcricinfo when reflecting on the gulf set to be filled in time for the Ashes series in England later this year. “It’s probably been the first time when you’ve had the top six with no real senior batsmen to feed off, I guess, around training and games, so they [the newcomers] have had to do all their learning from the coaches.

“It’s just so important to have those couple of senior guys when you bring those couple of young guys into the top six to learn from. You just can’t teach some things as coaches, you have to learn out in the middle batting with a senior person, so I think the other young batters will really feed off having them back.”

Hazlewood got a vantage point from which to observe how the reflexes of Smith and Warner had been dulled by what is now close to a year without top-tier first-class cricket, having participated in a pair of net sessions against them in Sydney in early January. It suggested that coach Justin Langer’s desire to see both the former captain and his deputy playing a significant volume of cricket before returning to Australian ranks is well-founded.

“It was great to have them around – it’s better than bowling to a stump if no-one’s available,” Hazlewood said. “They were really keen to get in there and have a hit. I think all three quicks were there on one of the occasions and there was just me and Patty [Cummins] the other time.

“They’re class players and they really put you to the test and it really makes you get something out of the net session. They were a little bit rusty early on, it’s hard to prepare to face 140kph-plus if you haven’t been doing it, but you saw over the course of three or four overs how much improvement they had even in that short space of time, so there’s no doubt they’ll be ready to go when called upon.”

When they do return, Smith and Warner will be kept away from holding leadership positions, the former for another year, the latter for the remainder of his career. Hazlewood was part of the churn of vice-captains for Tim Paine and Aaron Finch this summer. He revealed that he had taken a minimalist approach to the role before he was sidelined with a back stress fracture, adding that he had not received any word either way about whether or not he would be required as an official team leader upon his return.

“I’ve always voiced my opinion when we’re out there in the field or in team meetings and things, so I didn’t go out of my way too much to add to that”

HAZLEWOOD ON THE LEADERSHIP ROLE

“Not really going forward, to be honest. I’m not sure how it will all work out, there’s obviously been a few guys have a go of the vice-captaincy and help out as best they can at different stages,” he said. “I really enjoyed my time doing it for a couple of one-dayers and four Tests. I didn’t see my role change too much from previous years, to be honest.

“[Paine] probably came to me a bit more than in the past, but I’ve always voiced my opinion when we’re out there in the field or in team meetings and things, so I didn’t go out of my way too much to add to that. If I saw something, I’d mention it and go from there. I’m not sure how the roles will go moving forward. They obviously pick the team and then we’ll work it out from there. Interesting times.”

Perhaps the most prominent example of unsteady leadership in a time of struggle for Australian cricket was on day one of the Sydney Test against India, where Paine and the fast bowlers – Hazlewood among them – could not agree on a collective approach to test the opposition top order after the still newish Kookaburra ball had stopped swinging.

“It’s just part of learning, I guess,” Hazlewood said. “We’ve got quite an inexperienced leadership group to a degree and the plans were a bit mixed and we weren’t all in on the one plan and things got a little bit confused. On a wicket like that, you had to be 100% on the plan I guess, and have everyone buy into that.

“There was a little bit of confusion, but I don’t think it played too much of a role, to be honest. It was probably blown up a little bit too much – those little things happen all the time, and different people have different opinions of what’s going to work on a different wicket. We could have bowled a bit better, there’s no doubt about that, but it wasn’t as big a thing as it was made out I think.”