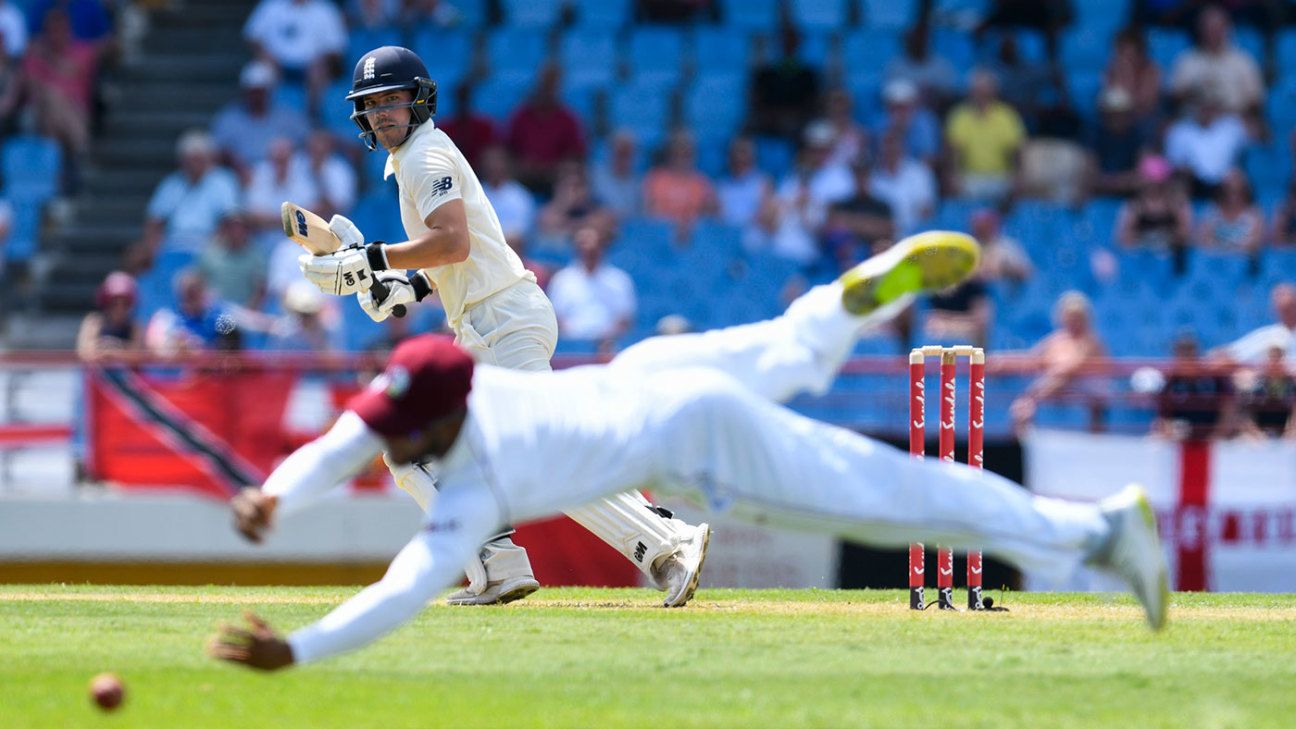 England’s chastened cricketers attempted to mend their ways after being asked to bat first at Gros Islet. But, though a run-rate of two an over suggested a determination to dig in and wait for their chances, the actual runs that they scored in the first session-and-a-half told a different story. Here are the first ten occasions on which the ball crossed the boundary today, as recorded on ESPNcricinfo’s ball-by-ball commentary. Not all of them were quite as intended …

8.5 Roach to Jennings, FOUR, dropped! Jennings turned into an S, feet going one way, hands another as the ball bends away to take the shoulder of the bat… but Chase puts it down at third slip! Burst straight through the hands

18.2 Paul to Burns, FOUR, pitched up and swinging, Burns drives and edges wide of fourth slip! Flashes and gets away with it… England’s second boundary of the day, picked up via a second edge through the cordon

27.1 Gabriel to Denly, 5 runs, on the back foot, thumped firmly into the covers, and that is a disastrously bad shy at the stumps! No-one backing up and Gabriel shrugs futilely as the ball whizzes to the rope! Hetmyer the culprit. That’s four more he’ll need to score later

28.1 Roach to Denly, FOUR, short, wide and wafty! Denly picks up four, but not in a convincing fashion. Almost too wide to reach, like his debut dismissal, and toe-ended through point to the rope

29.5 Gabriel to Denly, 5 wides, wild and leg-sided! The only mercy about that delivery is that Dowrich wasn’t penalised with byes. He got a glove to it but that was way off target

30.3 Roach to Denly, FOUR, wider on the crease, speared into the pads, and tickled very fine. Denly starting to enjoy his innings now after a dour start

35.6 Gabriel to Buttler, FOUR, a wild flashing drive, and dropped by second and third slip combined! Another revolting fling of the bat outside off from Buttler, scuppered by the outswing, and well, where was the 6’8 Jason Holder when his team needed him?

37.6 Gabriel to Buttler, FOUR, squeezed off a thick outside-edge. This has been a manic 20 minutes. In the air for a while, but safe enough in the circumstances. England need a stiff drink … which is opportune …

38.1 Paul to Root, 5 wides, oops, he’s swung that one too far, well down the leg side and giving Dowrich no chance

40.1 Paul to Root, FOUR, schwing and pinged! Classical cover drive from Root, that sashays silkily away to the rope