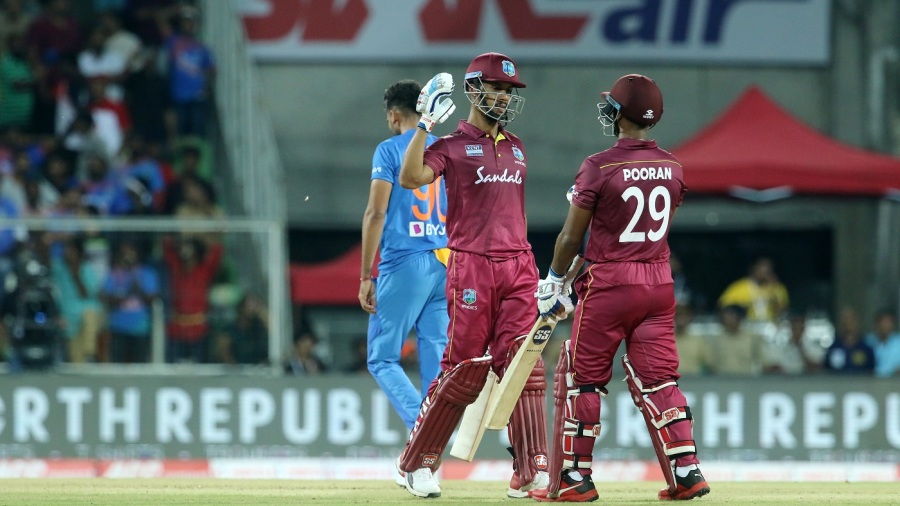 March 31, 2016, Mumbai. West Indies outgunned India in the semi-final and went onto become World T20 champions. They have fallen off the perch since and are currently No. 10 on the ICC T20I rankings , but don’t let that fool you. More than three years after knocking India out at the Wankhede Stadium, West Indies are back at the venue, preparing for their title defence in Australia next year.

Their two CPL 2019 stars – batsman Brandon King and legspinner Hayden Walsh Jr.- have gelled in nicely while Lendl Simmons has proved that he still has it. Kieron Pollard has been inventive with his captaincy and the seamers Kesrick Williams and Sheldon Cottrell have impressed with their canny variations in pace and length.

ALSO READ: Simmons does an RKO on India, out of nowhere

However, it is West Indies’ power-hitting that could be their biggest strength on what’s likely to be a familiar, flat Wankhede track. Let’s not even bring up the short boundaries. The likes of Nicholas Pooran, Shimron Hetmyer and Simmons kept clearing the longer boundaries in Thiruvananthapuram with considerable ease. And ahead of the series opener in India, West Indies had trained at full tilt in Mumbai before heading to Hyderabad. Plus, Simmons, Evin Lewis and Pollard himself have spent enough time with Mumbai Indians to crack the winning formula at the Wankhede Stadium: just keep hitting sixes.

West Indies, though, will have to contend with the absence of finisher Fabian Allen, who still hasn’t recovered from a knee injury.

India have issues of their own to deal with. They need to tighten their catching and fielding, particularly under lights, and they probably need more from their lower middle order against West Indies, who, in contrast, are armed with a variety of six-hitters. With the series on the line in Mumbai, India might not experiment with their XI, but on the eve of the game India’s white-ball vice-captain Rohit Sharma didn’t rule out the possibility of the hosts being flexible with their batting line-up.

Washington Sundar is under some pressure after dropping multiple catches in this series, but he has been quite accurate with his new-ball offspin. After Lewis carted him for a brace of sixes in the second ODI, Washington bounced back to have the opener stumped and ended with 4-0-26-1. Washington will also have fond memories of the Wankhede Stadium, where he grabbed 3 for 16 in four overs for Rising Pune Supergiant against Mumbai Indians in the first qualifier during IPL 2017.

ALSO READ: Powerplay bowling is tough but it excites me, says Washington Sundar

Guyana Amazon Warriors’ Brandon King can be brutal against pace if he gets going at the Wankhede Stadium. He has played useful cameos for West Indies against both Afghanistan and India, and a starring role on Wednesday could push him up the pecking order in the West Indies set-up as well as in the wishlist of IPL franchises.

With the series up for grabs, India are likely to retain the XI that played the first two games of the series. This means that Kuldeep Yadav and Mohammed Shami might have to wait for their T20I comebacks.

With the injured Allen sidelined from the third T20I too, West Indies might stick to their twin-spin attack and are likely to field an unchanged team as well in Mumbai.

“They are still doing a lot of rolling on it but I do not think twice about a Wankhede wicket, for every game it has been a brilliant wicket and brilliant matches,” West Indies coach Phil Simmons said of the pitch. In all likelihood, Mumbai is likely to roll out another belter. The weather is expected to be fine for the duration of the match.

“Pollard has played a lot at this venue, the others have not played that much. I think the experience which they have got from here is invaluable and especially the captain [Pollard], as he has been here [with Mumbai Indians] for 10 years.”
West Indies coach Phil Simmons

“They [West Indies] are very unpredictable as a team, you never know what they can come up with on that given day, like we saw the other day. Even the first game, they played very well and it was Virat Kohli’s brilliance that got us over.”
India’s white-ball vice-captain Rohit Sharma