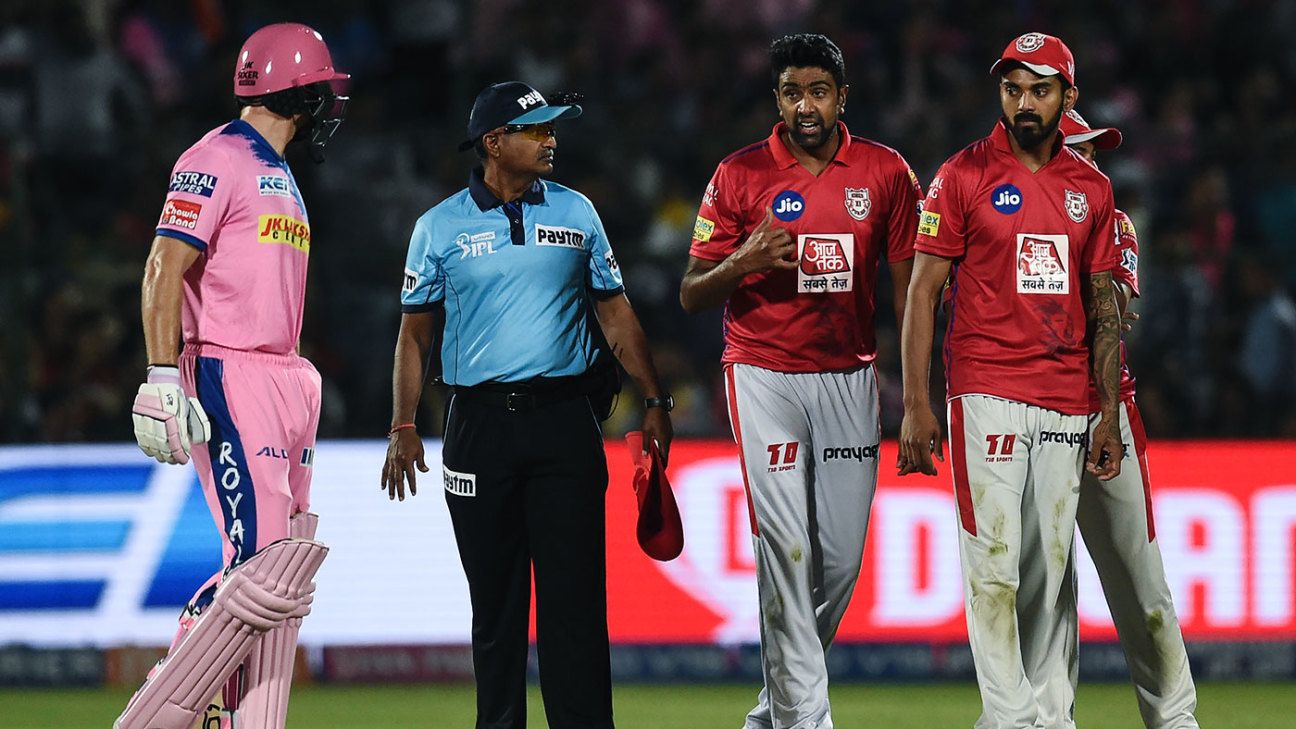 It says a lot about cricket that more noise has been made around the spirit of cricket than the actual legality of R Ashwin‘s run-out of Jos Buttler, despite this being a rare instance where such a run-out could be questioned under the laws of the game.

The decision after deliberation should still be out, but this was a case where the law provides a bigger defence for the batsman than the spirit. Yet again, though, a bowler is being vilified for merely asking for the law to be enforced.

That is not to say the spirit of cricket is absolutely bogus. If a pair of batsmen, for example, starts to manipulate scoring to allow one of them to get to a century in a small chase, you can see why some might see it as a disrespect to the opposition: “We are not only beating you, we can also afford to turn down runs while we do so.”

There could be a case made for not running out a batsman who has stumbled and fallen in the middle of the pitch.

In a way it is good that it is left as a matter of personal preference. It reveals human nature: a player known for following the spirit might not do so in the final over of a tight match. Either way, it should not be for us to vilify those who don’t follow what our perception of the spirit of cricket is.

Never forget this is a sport that celebrates practices that are much more unethical. Bullying, by way of verbal abuse, of players identified as mentally weak is but one. Appealing when you clearly know the batsman is not out is an attempt to capitalise on an umpire’s weakness and fallibility. There is a way to justify it to yourself: even if we don’t do it, the opposition won’t stop, and our team will be at a disadvantage.

But this run-out is the rarest of rare, not just as a dismissal but as a case study. The problem on this occasion is that the spirit is in direct conflict with the laws. Ever since the run-out, it is Ashwin who has been rebuked and asked to explain himself, whereas Buttler’s contravention of the law is taken for granted.

People have two categories of problems with this dismissal. First is pure sanctimony – and it comes from past, present and future greats too – wherein it is unethical to ever run out a batsman stealing ground. Some of this bunch prescribe one or two warnings before any bowler can even consider attempting a run-out in such a fashion.

People are bound to be confused. Why is it okay to appeal when you know the batsman is not out, which is basically trying to take advantage of an umpire’s weakness or fallibility, but such a grave crime to punish the batsman for straying from his crease before the ball has been delivered? There is another argument that this dismissal doesn’t involve skill, and is thus not earned. How about sharpness and game awareness? How about making the batsman earn the whole run and not steal a part of it?

Cricket is not too unlike human society. It is played by highly skilled, disciplined and driven individuals, but within it, just like the larger society, there exist opportunists and also those who strive to snub this opportunism with further opportunism. Why expect more of a player than what is required by law? And why ask only the bowlers to uphold the spirit of cricket?

Just because batsmen have been wandering out of their crease all this while, that doesn’t negate the fact that they have been gaining crucial feet or yards, and are thus themselves acting against this beast called the spirit of cricket. This is a great opportunity for cricket to become less elite, and rid the bowler of this burden.

The other problem lies exclusively with this particular run-out. It is said – even by MCC now – that Ashwin is in contravention of spirit of cricket because he waited too long. It was a complex enough decision under the law anyway. In 2017, MCC issued an amendment to law 41, which deals with unfair play (a subtitle which clearly implies it is the batsman who is indulging in unfair activity). The law now allows the bowler to attempt to run the non-striker out from “the moment the ball comes into play to the instant when the bowler would normally have been expected to release the ball”.

A chain of events here is important. Six years before MCC formalised this as a law, the ICC had taken the lead and overwritten this rule in its own playing conditions by allowing a bowler to attempt the run-out “before releasing the ball, and provided he has not completed his usual delivery swing”. In 2017, the MCC update overwrote the playing conditions again, introducing this ambiguity.

Had Ashwin done this before 2017, there would be no debate over the legality of this run-out. As it happened, in this case, the third umpire found himself making a call on whether Buttler would still have been inside the crease when Ashwin would normally have been expected to release the ball. How do you go about estimating the expected normal release of the ball when Ashwin’s arm didn’t even begin to go up?

This is where Fraser Stewart, the laws manager of MCC, has told ESPNcricinfo that Ashwin paused for too long, thus indulging in entrapment. Stewart is a much-respected voice when it comes to laws of cricket. The MCC’s laws might seem verbose to some, but they are an elegant piece of work. In this case, both might be muddled.

Stewart says the law was changed – from any time before the release to the new “expected” release – to allow the non-strikers to focus on the strikers who are smashing back balls harder than ever. What about the umpires then? They don’t have helmets, they are not even as agile as non-strikers, and they are looking at the bowler’s foot and then looking up at the batsman.

And why can’t the non-striker look at the striker from within the crease? And, most importantly, why leave at a disadvantage those batsmen who actually follow the law and watch the bowler releasing the ball before leaving the crease?

It is an extremely slippery slope to chastise Ashwin for his intent here. It would be extremely harsh to surmise that Ashwin cynically waited for the batsman to leave the crease. It literally happened within a second. There is just one second between his back foot landing and the bail coming off. Don’t forget that a lot of clips you are seeing are slow-motion replays, slowed down to expand this action to five seconds. Buttler is out of his crease for three of those expanded seconds. Even DRS doesn’t have the predictive path to tell you if Ashwin would have “normally released” the ball in that 40 percent of a second.

“Isn’t the central point of this sport that bowlers have to outwit batsmen within the laws of the game?”

It is even more unfair to blame a bowler for premeditation, even though Ashwin has asserted twice that he did this instinctively. This makes the dismissal even more rare. For such run-outs are usually not carried out without a degree of premeditation. This was, for example, the 23rd ball Ashwin had bowled on the night. Minutes after the match, ESPNcricinfo saw the highlights and saw Buttler had been out of his crease before Ashwin had delivered the ball that bowled Ajinkya Rahane, the seventh ball of his spell. A tweet next morning showed at least three other instances of Buttler straying out of his ground before Ashwin had released the ball.

Ashwin bowled 11 balls with Buttler at the non-striker’s end, and on at least four occasions Buttler was seen stealing ground. There’s no point in vilifying the batsmen for doing this. They are, after all, trying to take every last advantage to help their side win, but with their decisions come risks and consequences, and they should be prepared to face them – as in fact Buttler himself had done once already, in an ODI against Sri Lanka in 2014.

However, by questioning Ashwin’s spirit in this case, Stewart has undermined MCC’s own stated goal to “further confirm the principle” that “it is the non-striker’s duty to remain in his/her ground until the bowler has released the ball”. Ashwin did not release the ball. The ball was still in play. If the law continues to be ambiguous, the ICC should perhaps consider going reverting to its own playing condition.

The other problem with this spirit handwringing here is that cricket outside the international fixtures is played with no replays; umpires make instant decisions on the maidans and village greens. Those umpires are in no position to judge if the pause is too long.

For the sake of argument, let’s take the leap and agree that Ashwin used it as a tactic. He has long been a proponent of showing the batsman his limits. He is playing at a time when pitches and bats and playing conditions have threatened his very existence in limited-overs cricket. Possibly he has had enough of batsmen getting off strike even after a good ball because the non-striker has been stealing ground. So what if he decided to counter an unfair practice with a practice that is legit but just not used often? Isn’t the central point of this sport that bowlers have to outwit batsmen within the laws of the game?

Fears that a deterrent could end up becoming a tactical tool to entrap batsmen are not entirely unjustified. It could lead to bowlers farcically pausing in their delivery strides to wait for the non-striker to slide over so they can run him out. Well, boo hoo. Just watch the bowler release the ball before backing up. Watch it for yourself, don’t rely on a projection of the normal release of the ball. It’s not that hard. What’s more, it might give you a tip or two on picking the ball from the hand. If Ashwin’s action brings about this revolutionary change in our attitudes, it will be one of the big turning points in our sport. It will not be a moment too soon.