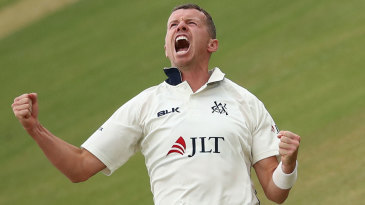 Peter Siddle followed his joint destruction of New South Wales – alongside James Pattinson on day two of the Sheffield Shield final – by beseeching the watching chairman of selectors Trevor Hohns to pick both Victorians for this year’s Ashes. He added the reminder that 18 years without a series win in England prove that a different approach to the bowling attack is required.

Seaming and swinging the Dukes ball just enough to beat the bat, Siddle provided the ideal counterpoint to Pattinson’s pace and fire as the Blues were obliterated for 121 in reply to the home side’s 289. While his haul of 5 for 28 was Siddle’s first of five wickets or more in Australia since 2015, it was the distinct resemblance of a grey day and mottled pitch to English climes that would have been of interest to Hohns.

On day one, the former Australia coach Darren Lehmann had conceded in commentary that it was his mistake as a selector not to trust Siddle to be part of the Australian bowling attack until the 2015 Ashes series had been decided. It’s a decision that Siddle clearly has not forgotten, urging the selectors to choose bowlers fit for the purpose of moving the Dukes ball around to confound England later this year.

“It was bittersweet after I got picked and took the most wickets in that last Test on a wicket that probably was the least suited [to] me over the whole series,” Siddle said of the 2015 Oval Test. “I haven’t worried too much about it after playing that Test match and doing what I did. That was enough to knock it on the head and show them what I could’ve done if I had been picked earlier so, so be it. And like Boof [Lehmann] did say, everyone makes mistakes, I make mistakes when I’m out there playing as well, I’ve made mistakes in games that have been crucial. That’s just a part of life, I don’t hold any grudges like that, it’s just part of the game.

“It’s something I’ve spoken a lot about over the last couple of years, you go back to results we’ve had and the experience of the bowling attack we’ve had, at times, probably haven’t been the right choices. That’s something that I hope we do manage. I’ve had to play in them and when I first went over there I wasn’t super experienced, did okay but we didn’t win. It’s just about learning from what we’ve done in the past and picking accordingly.

“There’s enough players around Australian cricket that have good experience over there. Not to say they’re definitely going to play, but obviously myself because I want to be on that tour, but look at Patto. I know he hasn’t played a lot of Test cricket of late, but he’s been successful when he’s played Test cricket there, and he had that amazing year for Notts two years ago where he destroyed Division One [Two]. So you’ve got to pick players who are readymade to play in those conditions, because they are a lot different to what people expect when they do select normally.”

The chemistry between Siddle and Pattinson, both products of the Dandenong club in Melbourne’s eastern suburbs, was palpable as they found pads, edges and stumps on the second afternoon, undoing the work of the NSW bowlers Trent Copeland, Sean Abbott and Harry Conway to restrict the Victorians.

Siddle’s first over, swerving one ball down the leg side for four byes, was not exactly promising, but he soon locked onto his task to pin Daniel Hughes lbw from round the wicket and set the scene. Pattinson was perhaps fortunate to have Nick Larkin ruled lbw not offering a shot to a ball that may have missed off stump, but there was no conjecture about his scorching deliveries through Jason Sangha and Peter Nevill. Kurtis Patterson, perhaps the Blues’ best chance of a batting riposte, was very nearly lbw shouldering arms to Patterson, before he fell having glanced a Chris Tremain delivery through to a diving Seb Gotch.

“We both enjoy playing together and bowling together. I think that shows out on the field and we have a lot of fun. The success we have spurs us both on,” Siddle said. “The way we went about it today and the success we had bowling together, more so what we did in Drummoyne the other week when we took them apart up there, we have fun. I think the pressure we build whether it’s me building pressure, or him scaring them with the pace or swing and me dotting them up at the other end, whatever it might be, we complement each other very well.

“We did well here and in other games, but over in England bowling together, it’s not as silly as it sounds to say that we’d be a good pair to have bowling together over there later in the year. There’s still a lot of stuff to be done before then but I think it’s shown over the times in the last couple of games where we’ve bowled together that we’ve taken a lot of wickets one or the other and built a lot of pressure. It speaks for itself in the last three games.”

Following back injuries in 2016, it had appeared that Siddle’s time around the Australian Test team was at an end, but prolific displays for Essex in the first division of the county championship last year vaulted him back into the squad for the UAE, with a clear eye towards the Ashes this year. Both Siddle and Pattinson have contracts for county cricket this year, and Siddle agreed he would have a point to prove should he get the chance against England in 2019.

“I think so, I talk a lot about how I bowl over there so if I do get picked there’s probably going to be a lot more pressure on me because I’ve spoken a lot about the conditions over there, how they suit me and it’s just going about your business,” Siddle said. “The last couple of years that’s where I’ve probably been better than I probably was when I was younger. [Then] I tried hard, thought too much about the future, looking ahead to other games or staying fit to make sure I get through the series and stuff like that rather than worrying about the game at hand.

“Especially the last two years that’s been my sole focus whether I play for Dandenong, state cricket, Big Bash or over in England, just worrying about that game and making every game count. JL [Justin Langer] sent me that message in England last year when I was over there taking a few wickets and he just said ‘Yeah, make every game count’. You’ve just got to stay fit and enjoy the moment because it ends sooner than you think.

“The chats we’ve had because I’m playing Division One [for Essex] in theory the sides I’m going to be playing are going to be a lot stronger than the Australia A side. You never really get strong sides in any tour matches or Australia A matches, so the way discussions have been I’ll stay with Essex and play. Could be similar to Patto was well, Patto’s Division One [for Nottinghamshire] and that’s just a bonus for Australia as well. It means we can play more players rather than rock up Australia A with 16 and only play 12, you can actually play if it is all 16 or you might have 20 players all playing at one time in England, with an Australia A game going on.”

There was time before bad light brought an early close for Sean Abbott to find a way past the Test opener Marcus Harris, whose first-innings century had set the game up for Siddle and Pattinson to strike.