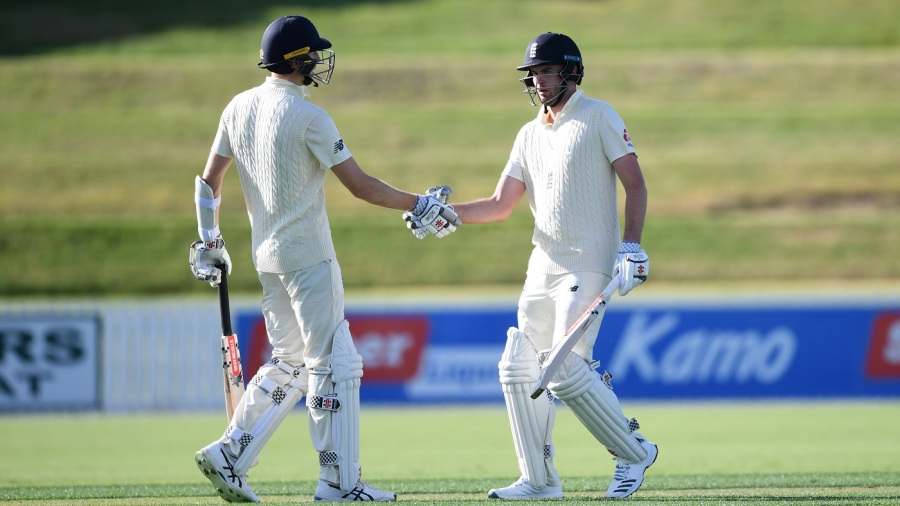 Centuries from Dom Sibley and Zak Crawley provided a peek into England’s future as the Test leg of their New Zealand tour began.

This is not a first-class game and there were moments, at an almost deserted ground on a bitterly cold day, when we seemed light years from the intensity of Test cricket.

But, as Sibley and Crawley seized their opportunities with centuries in their first innings in England shirts, it was not hard to imagine a time when both men are fixtures in the Test side.

Sibley is, in many ways, an old-fashioned Test batsman. He is, by modern standards, unusually patient – he made nine from his first 48 deliveries here, faced 22 successive dot balls at one stage and did not hit a boundary until his 60th delivery – with discipline outside off stump that would impress a Trappist monk.

He is not strokeless, though. As he demonstrated once he was set, he can pull, cut, drive and clip with the best of them. It’s just that he places a high value on his wicket and prefers to play the percentages as he builds an innings. His first 50 runs – which included a six lofted back over the head of left-arm spinner Theo van Woerkom – occupied 109 balls; his second 50 just 52 balls. He didn’t give a chance and has now scored centuries – one of them an unbeaten 215 – in three successive innings. It was all but certain he would open in next week’s Test before this innings, but he should now go into the game with confidence high.

His stance – as open, perhaps, as any England batsman since Peter Willey – will raise some eye-brows when it is seen by a wider audience on TV. But there was nothing here that would surprise those who have watched him in county cricket over the past 18 months where he has scored prolifically. While he retains a predilection for the leg-side, the open stance – a characteristic of those coached by freelance batting consultant by Gary Palmer – allows him to retain his balance and avoid his bat becoming trapped behind his front leg. Bearing in mind that he was the only man to score 1,000 Division One Championship runs in 2019 – he scored 1,324 and faced over a thousand deliveries more than any other player in the division – it seems to work pretty well for him. He is, in short, exactly what England have required at the top of the order for some time.

Crawley may be, too. It is asking a great deal of a 21-year-old averaging 31 in county cricket to make a go of things in the top-order of a Test team and he was not, initially at least, quite as assured as his partner here. It took him 16 balls – several of which troubled him – to get off the mark and he was dropped, at short-leg off the spin of Woerkom, when he had 11. But as he settled, he demonstrated a wide array of strokes and produced an increasingly commanding innings. Both men retired once they had reached their centuries to provide opportunities for their teammates. Joe Root, in making a run-a-ball 41 before stumps, looked in fine touch.

“I don’t see myself as a blocker,” Sibley said afterwards. “But opening the batting is tough. So you have to face a lot of balls and make sure you get through the new ball. Then you can cash in. I like to think I have a few shots in my locker and I know that batting always gets easier at some stage if you stick with it for long enough.”

Some caution is required in interpreting these scores. While this New Zealand XI does contain some good cricketers – Benjamin Lister and Henry Shipley were the pick of the seam attack – they are also raw: their entire squad has played fewer first-class matches than Stuart Broad has Tests. There is no doubt the standard of competition will increase sharply in the coming days.

It wasn’t a perfect day for England, either. With rain preventing play until 2.30pm, their plans to give all their batsmen an opportunity had to be shelved. As a result, they may well bat into the second day of this match which will provide their bowlers a little less time to prepare in match conditions. Ben Stokes also took a blow when batting in the slips which appeared to hurt his wrist. And while Rory Burns looked pretty solid for the first hour, he will be disappointed with the succession of strokes that led to his dismissal: fortunate to survive a series of near misses through the cordon, he could not help himself having another dart outside off stump which resulted in an outstanding catch at third slip.

Burns’ position is not in doubt, though. He will have another chance to prepare for the Test series in the three-day first-class game that starts at the same venue on Friday, with Joe Denly expected to return at No. 3. Realistically, that will mean Jonny Bairstow will depart for England – and some time working on his technique – in the next few days and sentence Crawley to a period on the sidelines. Ollie Pope will bat at No. 6 in the Test side, with Jos Buttler below him. Already it seems a better balanced side than the one that failed to regain the Ashes.

And while Crawley may have to wait for another chance, he hinted that he will ready if the call comes. This may have been the first time Crawley and Sibley scored heavily together for England, but there is no reason to suspect it will be the last.