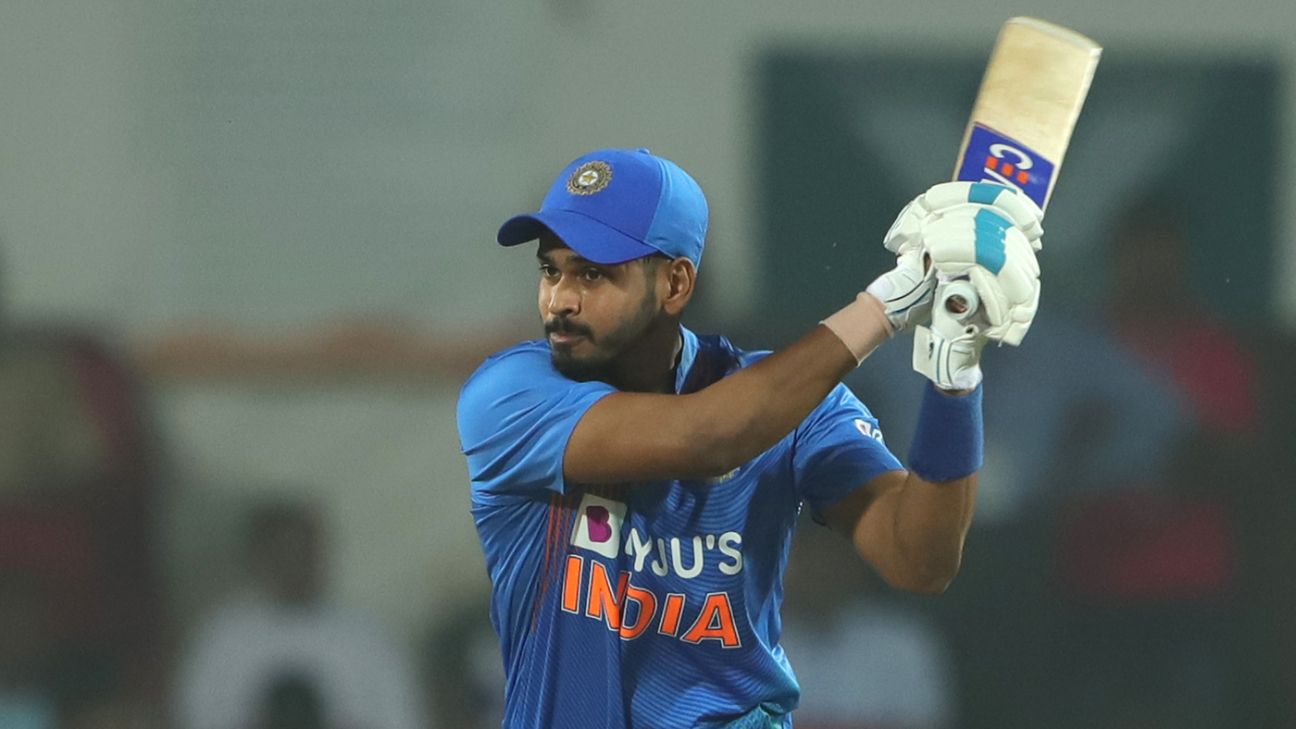 Shreyas Iyer came into the T20I series against Bangladesh in decent, but not spectacular, form from the Vijay Hazare Trophy. But after two cameos – 22 off 13 balls and 24* off 13 balls – in the first two T20Is, he changed the complexion of the decider with 62 off 33 balls in Nagpur, and feels the innings “really stated that I can bat under pressure as well”.

The 24-year-old from Mumbai has been in the mix as a middle-order option for India in white-ball cricket for a while, and pressed his claims to a regular spot in ODIs with innings of 71 and 65 in Port-of-Spain (from No. 5) in August this year, and might now have done the same in T20Is.

ALSO READ: The night everything changed for Deepak Chahar

“There is a lot of competition currently going on in the team, and I personally feel that I compete with myself. I don’t want myself to be judged with anyone or when you say this position is empty in the team. I am really open-minded and I can bat at any number at a given point,” he said at the press conference after the match-winning effort on Sunday. “So I just like to back myself in tough situations, and today’s innings I think really stated that I can bat under pressure as well. So, yeah, it was really important for me, and the team.”

Iyer has a huge reputation in the Indian domestic circuit, and has been talked up as a potential first-teamer for the national team at least in white-ball formats, for the long term. He said that he had the backing of the team management to go strut his stuff.

“It has been a really important last few series for me, to set the benchmark at the No. 4 position, which all of us are competing [for] at the moment,” he said. “I think, for me personally, they (team management) have given me a heads-up that, you know, ‘you’ll be there at No. 4, so just back yourself and really believe in yourself; we need someone who, even if [Virat] Kohli or Rohit [Sharma], when they get out, we need someone to finish the game and bat till the end’.

“If the ball is pitching in my area, I am not going to control myself, I am going to let instincts back me”

“And I think that role is of a No. 4. That’s what I was trying to replicate today, and it worked out really well for me, I am really happy on that.”

On Sunday, Iyer walked out at 35 for 2 in the sixth over after Sharma and Shikhar Dhawan had fallen and he was expected to play a big part if India wanted to set Bangladesh a substantial target. KL Rahul (52 off 35) and Iyer added 59 for the third wicket before Rahul was dismissed, and Iyer carried on till the 17th over, having set the platform for Manish Pandey to tee off.

The highlight of Iyer’s innings was when he hit offspinner Afif Hossain for three sixes in a row in the 15th over of the Indian innings, all of them down the ground.

Asked if that changed the script of the game, Iyer said, “Yes, I would say that, because the over in which I got three sixes, I think that changed the momentum completely, otherwise we would have finished at 150 or 155, which would have been a really tough total to defend on this wicket, when there was a lot of dew and the wicket was getting really better in the second innings after the roll.

“So, yeah, I would really give myself credit for playing that role, and also KL gave us the start. It was really important [for] one of the top three batsmen to stay till the 15th over, and he played his role really well.”

Iyer had scored nine runs from the first 12 balls he had faced before opening up, smacking legspinner Aminul Islam for a straight six, the first of five he hit in the game, to go with three fours.

“We have planned, as a team, the support staff and everyone, they have given me the freedom – not only me, but all the batsmen – that you need to have that intent when you go in there, and you should feel very positive when you’re batting. And I feel personally that if the ball is pitching in my area, I am not going to control myself, I am going to let my instincts back me. And yes, it turned out really well,” he said.

“First few balls, it was really tough for me to get to know the wicket, it was playing a bit quicker than the pitch reacted. So I took a little bit of time, I said I am going to take at least ten balls to get settled in, and after that I am going to back myself and… when you really believe that you’re going to score in the later half of the innings, it really works out well for me. So I backed myself.”

What happens when Virat Kohli returns to the side remains to be seen, but Iyer might have done enough in his last few international innings – 62, 24*, 22, 5, 16*, 65 and 71 since going to the Caribbean – to make a strong case for himself for the ODI side, as well as, with a T20 World Cup coming up, in that XI.