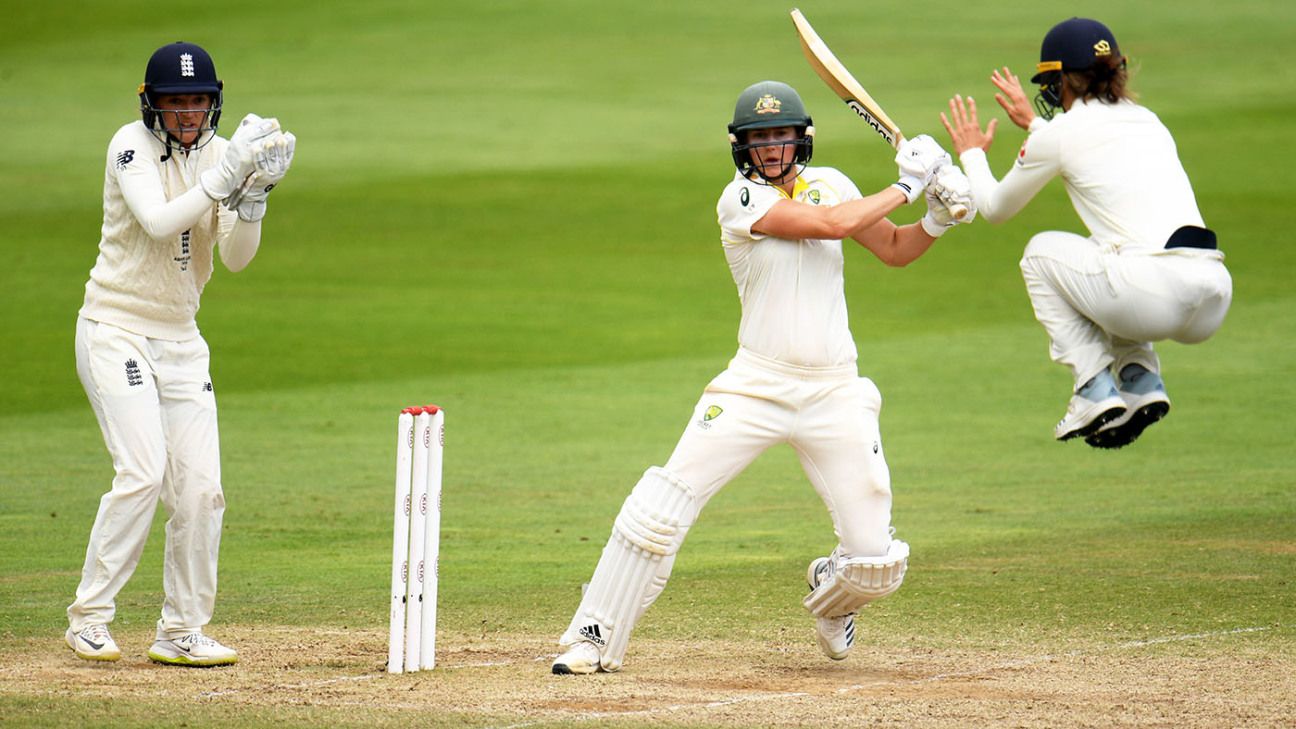 The conclusion of the Women’s Ashes Test in Taunton has raised the question whether the format should be played across five days, after a combination of rain and stodgy scoring rates stymied the contest.

Australia batted out the final day of the one-off match, securing the draw they needed to retain the multi-format Ashes, with the coach Matthew Mott saying they had considered ways of making a match of it but weren’t going to donate England a chance of victory.

Australia had dominated the Test from the start. And once they batted for the first four sessions and rain wiped out the rest of day two, England’s chances were all but gone of fighting back for a win even before they took a defensive approach with the bat late on the third day. England did declare after saving the follow-on and made a couple of early inroads in Australia’s second innings, but the visitors were never in danger.

“Maybe it’s an advertisement for five-day Test in women’s cricket,” Mott said. “With four [days] and you take half a day out, it certainly wasn’t enough. It would have been an awesome [fifth] day if we’d had the extra day.

“We’re not a charity, we don’t give up a result that easily. We’ve won the first three ODIs and we deserve the opportunity to bat it out. We weren’t prepared to roll that dice and give England a chance when they didn’t really earn the right to it.”

There were 100 overs scheduled for each day of the Test. So, without weather interruptions, there would have been 400 overs available in the game compared to 450 across a five-day Test consisting of 90-over days.

“[A fifth day] would’ve helped get a result,” Meg Lanning, Australia’s captain, said. “It probably wouldn’t have been a drab day if we had a day five but we both knew it was four days coming in. It’s not a decision for us to make but I guess it’s something to look at.”

However, England coach Mark Robinson suggested that the first priority for the Test format in the women’s game was to get more matches played before thinking about extending the length of them. This decade there have been just eight Tests with six of them being England-Australia matches.

“You’ve got to try and get more Tests, and more countries playing Test match cricket,” Robinson said. “I think we all would agree it would help the development of the players.

“The young Aussie [Tayla Vlaeminck] what a promising quick, but at the moment she hasn’t got control – if that’s a 50-over game she has wides – but the beauty of this is it allows her to run in, how exciting is that? Games allow quicks to run in, it allows batters to bat time, build innings, be tactically better.

“It would help not just our team, but all teams around the world, the development of their players before we get to saying we should be playing five days in England-Australia [Tests].”