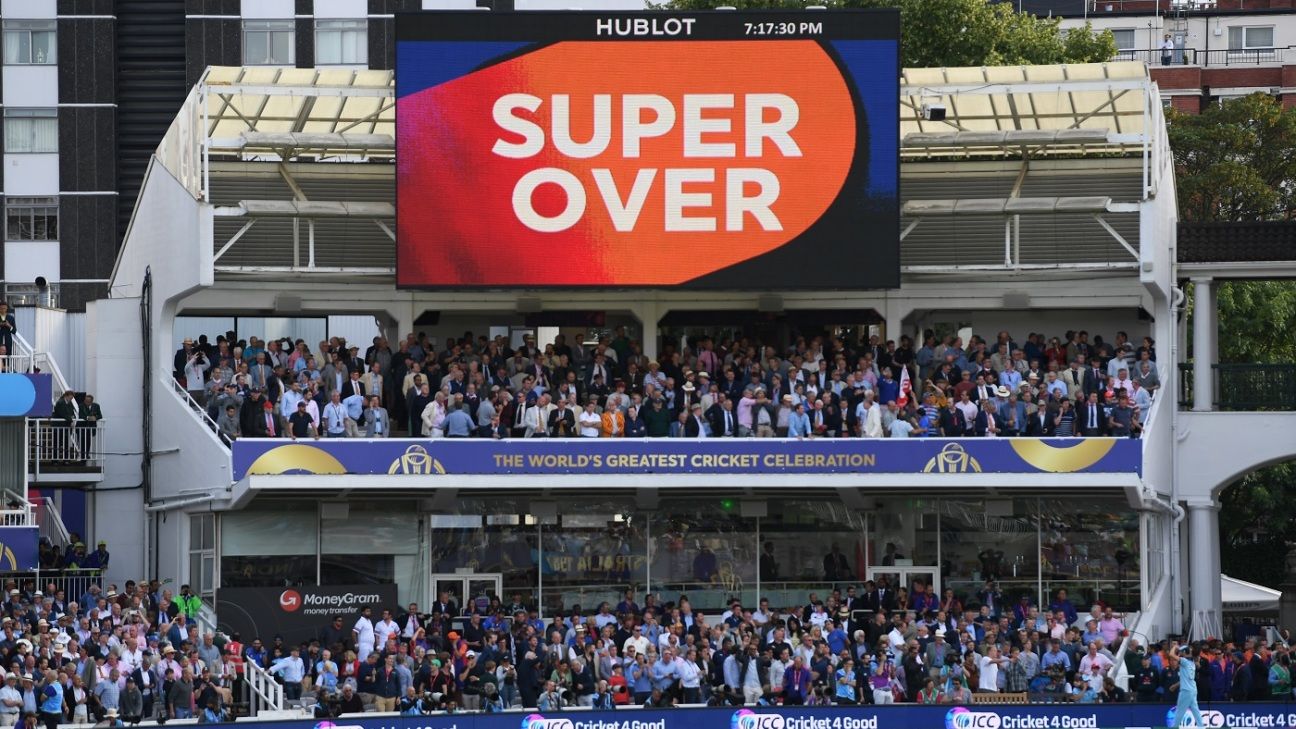 Gary Stead, New Zealand’s head coach, has suggested that the possibility of sharing the World Cup was something that “should be considered” after his side were denied in a heartbreaking finish at Lord’s on Sunday. The teams could not be separated after 100 overs and also tied the Super Over, but England lifted the trophy after winning on boundary countback.

Having slept on the result, Kane Williamson described the manner in which the final was decided “a real shame”. New Zealand had further cause to be disappointed, after it transpired that England should almost certainly have only been awarded five overthrows, rather than six in the final over of regulation time.

“Make sense of it? I think that’ll take quite a bit of time actually,” Williamson said. “Such a fine line. May be the worst part is there is so much you can’t control in those situations and it still sort of eventuates the way it did. All in all it was a real shame that the tournament was decided in the way it was after two teams went at it. And two good teams were playing a cricket game, but it was still a tie.

ALSO READ: Kimber: How the greatest ODI finish played out

Stead and Craig McMillan, New Zealand’s batting coach, agreed that allowing England and the Blackcaps to share the World Cup would have been an ideal finish. Asked during a media interaction at the team hotel whether he would have preferred New Zealand being declared joint winners, Stead was open to the suggestion.

“Perhaps when you play over a seven-week period and can’t be separated on the final day, that is something should be considered as well,” Stead said. “But again that’s one consideration over a whole lot of things that went on over the World Cup. Everything will be reviewed, and I think that it’s a good time to do it now. But probably just let the dust settle for a while.”

However, McMillan, whose contract finished with the World Cup, was more straightforward, saying sharing the trophy would have been the “right thing” in contrast to the tie-breaker in the form of the Super Over, a rule adopted last year by the ICC. “It is not going to change yesterday’s result. But what is probably fair to say at the end of seven weeks in a big tournament like this, when you have two teams can’t be separated after a 50-over match and then a Super Over and neither team did actually lose in many ways in terms of runs scored.

“Then perhaps sharing the trophy would be the right thing to do. Wasn’t to be yesterday, which we all are disappointed with. But it is sport and those were the rules.”

There were a number of turning points during England’s chase, with several occurring one after the other in the final half hour. The biggest was when Martin Guptill’s return throw from deep midwicket hit the back of Ben Stokes’ bat and ricocheted for four overthrows, thus reducing England’s target to a mere three runs from two balls. The on-field umpires Kumar Dharmasena and Marais Erasmus consulted the TV umpire before declaring the six runs.

Subsequently, as reported by ESPNcricinfo, it seems England were actually wrongly awarded an extra run. Simon Taufel, a former ICC Elite Panel umpire, said the match officials had “goofed up”. New Zealand remained unaware of exact wording of the rule even the day after.

Williamson said he trusted the match officials’ word and refused to complain about how things turned out. “I actually wasn’t aware of the finer rule at the point in time,” Williamson said. “Obviously you are trusting the umpires in what they do. You throw that into the mix of few hundred other things that may have been different that we wouldn’t be just talking about one thing.

“Two great campaigns. From our side of things, we are really proud of the ay the guys went about their business. And am sure the English were as well, they had a great campaign. It sort of showed – we went toe-to-toe and it was the fine print that decided it.”

Watch on Hotstar (India only) – The final overs of the chase

Stead, too, tried hard to be realistic. He felt New Zealand could do nothing but accept their fate. He felt Super Over probably was currently the only way to pick a winner until the ICC devised a better solution. “That is one,” he said of the idea of having several Super Overs, again and again, until there’s a winner. “I guess a valid way as well. The hard thing I find is a 50-over competition being decided on a one-over bout, just doesn’t seem quite right, but then I don’t write the rules. That’s the way it goes.”

Both Stead and McMillan were confident the ICC would review whether the Super Over was indeed the best way to deal with the scenario like a tie in a World Cup final. But for New Zealand, as McMillan said, nothing would change now.

“Small margin this, isn’t it? I don’t know that rule to be perfectly honest. I have played a lot of games of cricket, watched a lot of cricket – overthrows have just been added to what has been run as opposed to the point of the throw coming in. So, again, it will be something that will be something debated, discussed, but again it doesn’t change the result.”