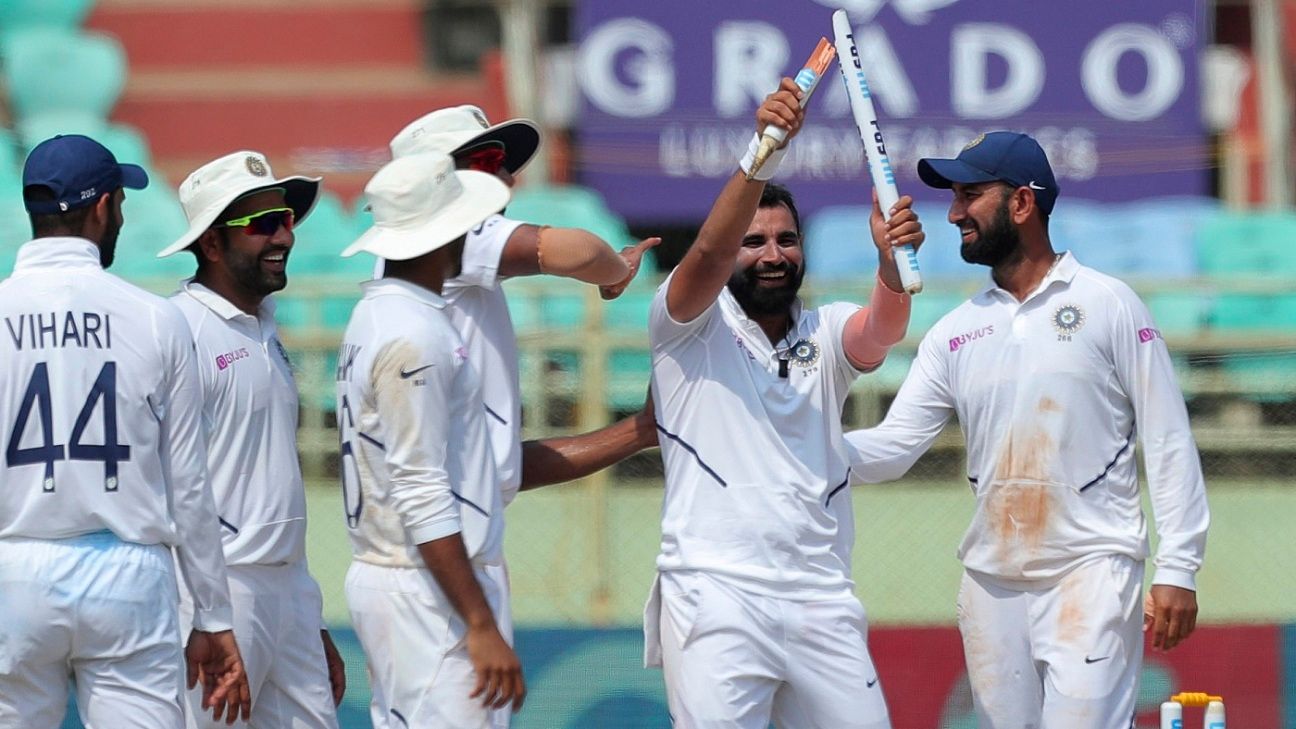 India’s 203-run against South Africa was not as straightforward as the scoreline might suggest. South Africa put in a strong performance with the bat in the first innings, and were in with a chance of a draw till the fifth morning, when they blundered against Mohammed Shami and Ravindra Jadeja. Here’s what India captain Virat Kohli had to say about his match-winning bowlers, and other key performers from the game, in his post-match chat with host broadcaster Star Sports.

On why India’s pacers have been effective in home conditions
“It’s all about the attitude. If the fast bowlers step out on the field thinking spinners are going to do all the work, then it doesn’t do any justice to them playing in the XI. I think the attitude and the mindset they have created for themselves, it’s been outstanding in the last two years. Even in India, they are looking to make a contribution. It’s not like it’s hot and humid and they give up. They would ask for shorter spells so that they can give 100%, which is communication that’s required from both ends. I think they have been brilliant in terms of doing that for the team.

“You see guys like [Mohammed] Shami, Ishant [Sharma], Jasprit [Bumrah] recently and Umesh [Yadav] in the past as well doing those important things in the game, which we want them to do. Even a couple of wickets in a spell help the spinners – who might be dominating from the other end – to get a bit of a breather. So it’s all about wanting to make a play for the team that’s setting them [the pacers] apart even when the conditions are difficult.”

On Ashwin, Jadeja and Shami’s performances in Visakhapatnam
“Jaddu and Ash again really, really good. Ash in the first innings was very good given the conditions. The pitch was flat, they got a few boundaries away but you have to accept that because we also got 500. It wasn’t like there were any demons in the pitch. We always knew it was always going to be a second-innings game. The fact that he picked up six [seven] in the first was a great effort from his end, and Jadeja in the second making those quick breakthroughs for us in that spell.

“But Shami has been a strike bowler for us in the second innings consistently now. If you see all his four-five-wicket hauls, they come in the second innings invariably when the team needs it, the ball is reversing a bit, that’s his strength. All the guys stood up. The batting heroes were obvious but the bowlers had it tougher in this game, to keep going in these conditions. So they deserve a lot of credit.”

On the pick of India’s batsmen in Visakhapatnam
“Rohit [Sharma] was outstanding in both innings, Mayank [Agarwal] along with him in the first innings was brilliant. And in the second innings as well he started off so well. [Cheteshwar] Pujara played with the tempo that allowed the rest of us to come in and get those extra runs so that we have ten, maybe 12 extra overs to bowl at the opposition. It was a hard grind though, because of the conditions, especially the weather conditions and the pitch slowing down as well.”

On the quality of SG balls
“This lot is much better than the last lot we played with. So some improvement has been made. We would like the ball to be hard and consistent throughout the 80 overs. If it softens up after 40-45 overs, you have nothing happening in the game, which is not ideal for Test cricket. The hard ball obviously kicks a bit more, makes it difficult for batsmen.

“We would like to see that happen on a consistent basis, the ball remaining hard for at least 60 overs, if not 80. So that we are [all] in the game through and through, that’s the fun of Test cricket. Bowlers keep coming at you and trouble you, you need to be able to score runs then, and both teams are in the game. That’s the whole fun and essence of Test cricket.”