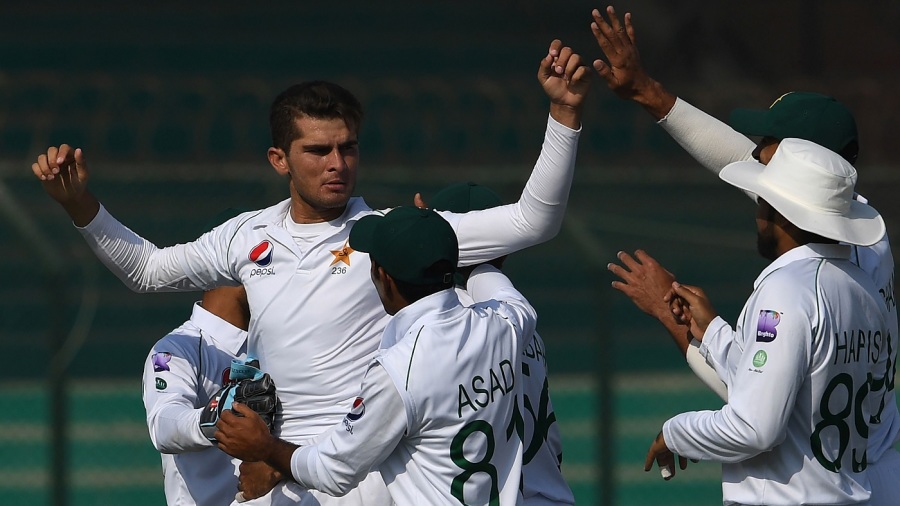 On a day that threatened to mirror the script of its predecessor in the first hour, Sri Lanka dug in and clawed their way to, and then well past, Pakistan’s first innings total. The lead of 80 came courtesy lower-order contributions that will have frustrated Pakistan no end, with Dinesh Chandimal tying the innings together as Sri Lanka held off a surging Pakistan pace attack. The home side, for their part, did well enough to ensure there wasn’t any bloodletting in the tricky final hour the openers had to deal with, as Shan Masood and Abid Ali reduced the deficit to 23 by stumps.

From 80 for 5, partnerships of 67, 37, 51 and 36 extended Sri Lanka’s innings well into the third session, Dhananjaya de Silva and Chandimal robbing Pakistan of the momentum they had generated in an opening hour of hostile fast bowling. Nightwatchman Lasith Embuldeniya was dropped early in the day but fell soon after in a bizarre attempt to slog-sweep Mohammad Abbas, while Shaheen Afridi – who picked up his first five-for in Tests – needed no such largesse from Angelo Mathews, bringing one in to tickle the batsman’s inside edge through to the keeper.

Pakistan may well have felt this was their chance to come away with a lead, but swift counterattacking – and an ineffectual spell from a confidence-sapped Yasir Shah – poured water over those plans. When de Silva strode down the crease to loft Yasir over his head, following it up with a back-foot punch through cover, the shackles were broken. Yasir was unable to settle on either length, line or pace, with both batsmen taking advantage of the inconsistency as Sri Lanka neared 150.

The breakthrough came thanks to Afridi, with de Silva unable to get on top of a short-pitched delivery and sending it straight down fine leg’s throat. But the wicket did little to stem the flow of runs before lunch, and by now, even Niroshan Dickwella, who had used up more than his fair share of luck in his first half hour at the crease, was emerging from his shell. Then Abbas would castle him with perhaps the ball of the day, beating him on the inside edge with an inward-seaming delivery that clipped the top of off, and at 182 for 7, with Sri Lanka nine short of Pakistan’s first-innings total, it seemed this would become a second-innings shootout.

Pakistan were guilty of letting the game drift for large spells, and the eighth-wicket partnership at one point scored at nearly 4.50 runs per over. Dilruwan Perera was perfectly comfortable keeping Chandimal company as Sri Lanka brought up the 200 and then beyond, the highlight being Chandimal spanking Naseem Shah for three fours in an over.

When Chandimal fell, Dilruwan took over the mantle. Pakistan duly spread the field for him; practically begging him to take a single and turn the strike over. Despite this, Dilruwan continued to find the boundary, despite seven fielders stationed in the deep at most points during his ninth-wicket stand with Vishwa Fernando. Haris Sohail may have been successful getting rid of Chandimal, but when they tried his occasional left-arm spin against Dilruwan, he carted him down the ground for a six off the first ball of his spell.

Tea came and went, and Sri Lanka moved past 250, and continued to march on. It took the return of Afridi to finally clean Dilruwan up two runs shy of a well-deserved half-century, and the left-arm quick removed No. 11 Lahiru Kumara a couple of balls later to bring an end to what had appeared an interminable innings. It was the first time he had taken five wickets in an innings, but for Pakistan’s most consistent fast bowler over the last couple of tours, you feel sure there is more to follow.

At that stage, Sri Lanka walked into the changing room, likely confident it was their day, maybe even their Test match, and the final hour represented an opportunity to ram that point further home. But Pakistan came out determined not to block their way through the fourteen overs they faced, both openers taking the attack to the quicks right from the outset. Abid Ali’s confidence wasn’t surprising, given his form, and Shan Masood didn’t shy away from putting bat on ball either, and got off to a start evocative of the form he displayed on Pakistan’s tour of South Africa at the start of the year, when he regained his place in the side.

Sri Lanka turned to Embuldeniya within five overs, and while he got the ball to turn, there were no genuine chances. The 50 partnership came up before the end of the day, and when the light finally faded, Pakistan were a mere 23 runs away from levelling the scores. The Test match may be evenly poised, but the evidence of the last half-session suggests Sri Lanka’s fourth-innings chase will be anything but routine.