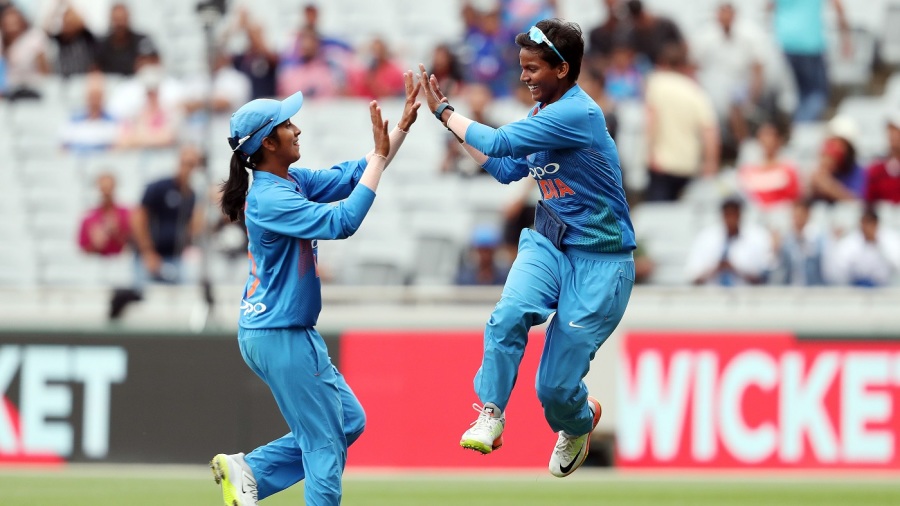 South Africa women dropped three catches in the first four overs. India women nailed a direct hit with their very first opportunity through Pooja Vastrakar in the first over of the chase to remove Lizelle Lee, South Africa’s most dangerous batsman. This was just a small window to exhibit the gulf between both sides in a 17-overs-a-side contest in front of nearly 8000 fans in Surat.

India defended 140, made on the back of vital knocks from 15-year old Shafali Verma (46) and 19-year old Jemimah Rodrigues (33). South Africa, although steady, didn’t get the big hits away in the face of some superb spin bowling from the Yadavs – Poonam and Radha.

Seven overs into their chase, the asking rate touched 10 an over and that resulted in a series of desperate heaves, slogs and mistimed reverse-sweeps on a slow wicket. South Africa managed just 89 for 7 in the end; India’s 51-run win helping them clinch the series 2-0 with one game to play.

Poonam came within a hair’s breadth of a hat-trick, after sending back Nadine de Klerk and Mignon du Preez. Where de Klerk was undone by dip and sharp turn, slicing a lofted hit to cover, du Preez holed out at long-on after being deceived in flight. Sune Luus, the captain, averted the hat-trick, despite being beaten on a slog, as she dragged her back foot back in time. At this stage, South Africa were 65 for 4 at the end of 11 overs, and the chase only went downhill from there on. Luus was out stumped in the next over to hand Poonam her third wicket.

Where wickets were the order of play in the second innings, misfields and dropped chances were aplenty in the first. South Africa should have had Smriti Mandhana off the third ball but neither the bowler Shabnim Ismail nor mid-off ran across to pouch a top-edge. Mandhana was reprieved again on 6 when de Klerk put down a skier as she back-pedalled at extra cover.

Shafali, too, lived dangerously, surviving a series of mistimed heaves and slogs. Her first boundary, in the second over, came off a streaky edge off a slog that flew past the wicketkeeper. She hit her straps only in the sixth over when she drove Luus superbly through extra cover, and then charged down the pitch to muscle a full toss over deep midwicket. India rode their luck to move to 43 without loss in six overs.

Even as all this played out, Mandhana continued to live a charmed life as she was dropped for a third time on 11 at long-off by Tumi Sekhukhune. Then in the ninth over, Laura Woolvardt palmed a superb hit from Shafali at deep midwicket for six. Two (legal) balls later, Shafali was dismissed, with India well placed at 65 for 2.

Harmanpreet usually likes to take her time to settle in, but on Tuesday she came out playing her shots. She stepped out and used her high backlift and long reach to muscle a huge six down the ground and also played the slog-sweep superbly, racing to 15 off six balls. Harmanpreet’s enterprise rubbed off on Jemimah Rodrigues, who in contrast to Harmanpreet, relied on timing and wristwork to keep picking off runs.

She walked across to flick incoming deliveries through midwicket, fetched full deliveries from outside off to bisect midwicket and long-on, and often made room to get underneath the length and scythe the ball between cover and point. This fine exhibition of clean ball-striking gave India end-overs momentum. While Rodrigues didn’t stay till the end, her 22-ball 33 helped India plunder 71 off their last eight overs.

South Africa lost Lee in the first over of the chase, when a misunderstanding resulted in Tasmin Brits turning her back on her after initially looking to pinch an overthrow. While South Africa had started with medium-pace from both ends, India began with spin from one end and immediately had the batsmen struggling for timing.

Woolvardt and Brits added 39 off 37 balls, but by then the desperation to find the big hits was all too apparent. This played into the hands of Poonam, whose loop and flight – that didn’t give them any pace to work with – resulted in their undoing. Barring the twenties from Woolvardt and Brits, all other South African batsmen managed just single digits on a pitch where shot-making proved increasingly difficult as the game progressed. In the end, South Africa were left with a teasing thought: what might have been had they held onto their chances?