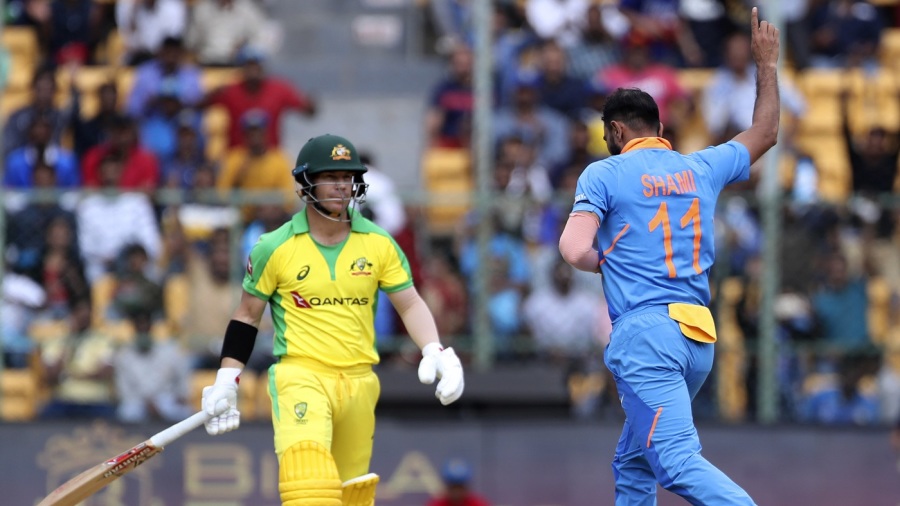 After losing four successive ODIs at home against Australia, India finally found a way to put up an above-par total and pull one back in Rajkot. As a result, with the ongoing series locked at 1-1, we will have a decider at the M Chinnaswamy Stadium, which usually rolls out belters.

On the Rajkot pitch, an excellent one for batting, India looked like they might end at around 320, but KL Rahul’s middle-order burst ensured that the hosts got closer to 350. Against West Indies in December last year, Rahul had cracked 102 off 104 balls, in Visakhapatnam in a must-win game for India, and led them to an above-par total. On Friday, he was also at it in a similar must-win clash, although from the middle order, against a stronger bowling attack. Rahul also showed off his fast hands behind the stumps, proving a versatile white-ball package. He will now return to his home ground, with the series up for grabs.

The last time India played a limited-overs game at this venue, Rahul wasn’t part of the action, in a T20I series decider against South Africa. Virat Kohli had challenged India to bat first there and while aiming for a big total, they lost their way and only got an underwhelming 134 for 9.

India have become a more potent white-ball outfit since, but count Australia out at your own peril. They out-thought and overpowered India in the ODI series opener in Mumbai and when Steven Smith and his “long-lost brother” Marnus Labuschange were in control in Rajkot, Australia did threaten to overhaul India’s 340 for 6.

On the bowling front, they have Adam Zampa, who seems to have Kohli’s number, and although Mitchell Starc travelled for runs in the second match, Australia carry a well-rounded attack that can adapt to easy-paced, hit-through-the line pitches. However, they will face a much stiffer challenge if they are to defend a target in dewy conditions in Bengaluru.

The Rajkot scorecard will tell you that Jasprit Bumrah managed just one wicket in 9.1 overs. It won’t tell you that he bowled a sublime spell with the new ball, threatening both edges of Aaron Finch, in particular, and then returned to close out the match for India. The quick had a rather rusty return against Sri Lanka, but he showed signs of his best defending a total against Australia.

Since that 43-ball 84 against India in Mohali last year, Ashton Turner‘s form has tailed off and his scores in India since read: 20, 0, 0, 0, 3* and 13. He’s coming off a fairly quiet Big Bash stint too, where both Glenn Maxwell and Marcus Stoinis have been in top form. Ashton Agar, who is with the squad in India, and Dan Christian are also in the allrounders’ mix and with a dodgy shoulder limiting his bowling, Turner needs a sizeable contribution with the bat to keep his spot.

Shikhar Dhawan, who had been struck on the ribs while batting, is reportedly fit for the decider but there’s still a cloud over Rohit Sharma’s availability. The vice-captain has a shoulder problem, and it remains to be seen if India will risk him on Sunday or preserve him for the New Zealand tour. According to the BCCI, the recovery of both the openers is being “closely monitored” and the team management will take a call on their participation on the day of the match.

On flat tracks, India might be better off with Navdeep Saini’s extra pace rather than the batting insurance that Shardul Thakur provides. And with Kuldeep Yadav also playing a crucial hand in the victory in Rajkot, India might be tempted to give him another go ahead of Yuzvendra Chahal.

Also, there isn’t enough clarity on whether Rishabh Pant has recovered from the concussion he had suffered in the first ODI.

Australia might consider giving Josh Hazlewood a game in place of Kane Richardson, who gave up 73 runs for two wickets in the second ODI.

Another runathon is on the cards in Bengaluru and dew could hinder the side bowling second. The weather is expected to be fine for the duration of the match.