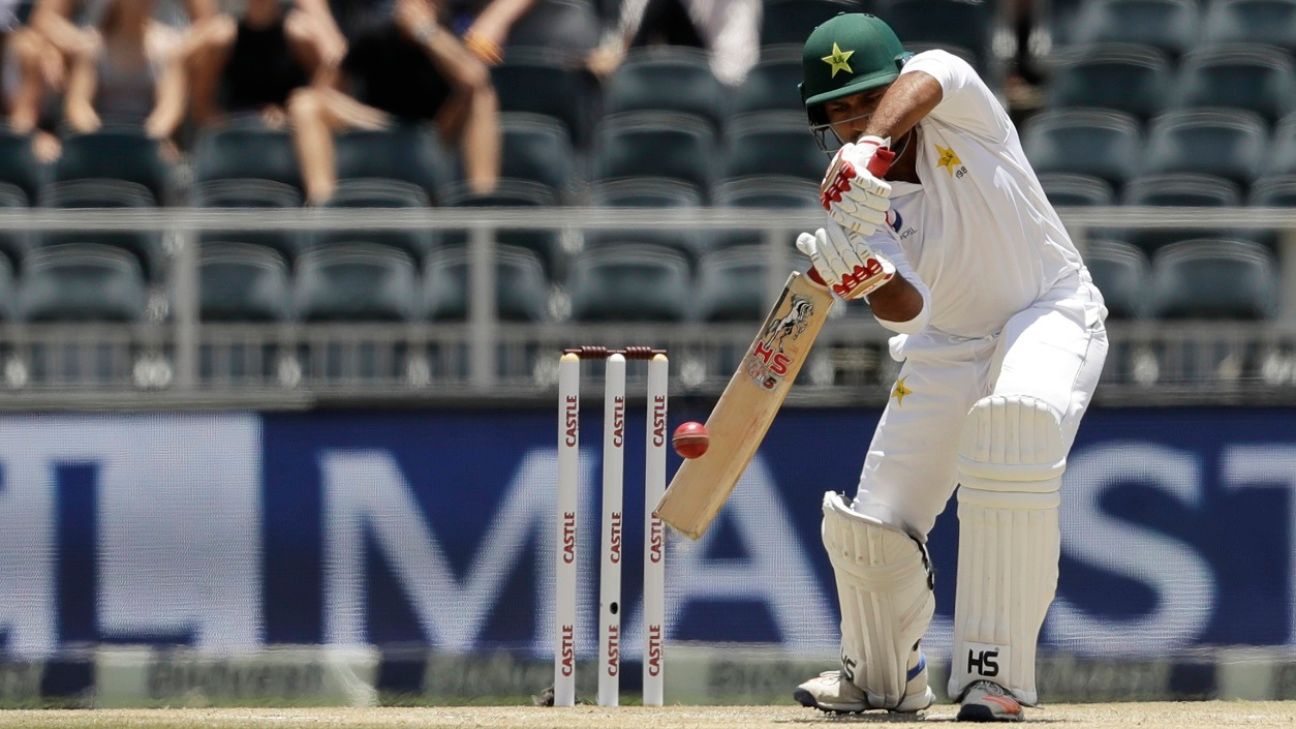 Pakistan captain Sarfraz Ahmed cut a strikingly upbeat figure at his post-match press conference despite acknowledging the challenge his team faced to avoid their second successive whitewash in South Africa. It was a day of relative personal success for a man who has been under severe pressure for much of the tour, with Sarfraz stroking a classy half-century and breaking the record for most dismissals by a Pakistan wicketkeeper against South Africa in a Test match. However, Sarfraz also pointed towards several missed opportunities for Pakistan to come away from day two in a better position.

“I think if you talk about our day, we had a chance to get to 262 runs but we didn’t get it,” Sarfraz said. “When me and Babar were batting, we were thinking we should play positive cricket. Unfortunately, I couldn’t score more than 50. If I’d scored 50-70 more runs, the position we’d be in would be much better.”

He bemoaned a few “bad shots” towards the end of the Pakistan innings, paving the way for the collapse that allowed South Africa to move into a commanding position. Sarfraz and Babar Azam had launched a brilliant counterattack after Pakistan were in dire straits at 91 for 5. The pair added 78 runs in only 10.1 overs, and suddenly Pakistan looked like they had South Africa’s first-innings score in their sights.

But from the moment Sarfraz poked at one slightly wide of off stump to the slips, Pakistan slumped once more. Babar Azam lofted one straight into fine leg’s lap four balls later, and before you knew it, the visitors had been bowled out for 185, allowing South Africa a hefty 77-run lead. Sarfraz acknowledged his own responsibility in the collapse, admitting he had played a poor stroke.

“I think we played a couple of bad shots. I think my shot was also a bad shot, and Babar’s too. If you see the last five wickets, there were three bad shots. Mine, Babar’s and Faheem [Ashraf’s]. If we hadn’t played those shots, maybe we’d be in a much better position.

“The problem of losing too many wickets quickly is one we’ve been facing for the past 10-12 innings. We had the same problem in the first Test match, where Shan [Masood] and Imam [ul-Haq] batted well, and once they got out we lost too many wickets. It was the same in Cape Town, and now the same here. It’s a problem we’re facing and we have to work on this.”

Even so, Pakistan’s bowlers helped them storm back into the game in a disciplined hour of bowling with the new ball. Dean Elgar was undone by a beauty from Mohammad Amir that cut him in half and took the edge, before Mohammad Abbas’s discipline and subtle movement saw him draw Aiden Markram’s edge. In the 15th over, Faheem removed Theunis de Bruyn and Zubayr Hamza within three balls to leave South Africa tottering at 45 for 4. That they ended the day having added 90 more runs for the loss of just one more wicket disappointed Sarfraz, who believed the bowlers had taken their foot off the pedal towards the close.

“I think our bowling, especially the last 45 minutes, we weren’t up to the mark,” he said. “We bowled really well overall but the last one hour we didn’t bowl well. At the moment, if you talk about our bowling attack, we are only bowling well in patches. If we bowl well consistently throughout an innings, I don’t think South Africa will score as many runs against us.”

For a man carrying the weight of a nation’s expectations, there wasn’t much time to enjoy any personal triumphs, but he did say he had made a slight technical adjustment since the Centurion Test match, where he scored a pair.

“If you see my first two innings, my feet weren’t moving very much at all. My batting style hasn’t changed. So I worked on my feet movement, so thankfully I’m playing well at the moment. If you want to score here you have to play positive cricket. Because the good ball is never far away. If you see Markram or Hashim [Amla], whenever they see the bad ball they put it away. If you don’t play positive cricket, you will get out at any time.”

With South Africa 212 runs ahead with five wickets still in hand, Sarfraz will be hoping for one final burst of positivity from both bowlers and batsmen. While the series may be lost, if Pakistan can pull off the unlikeliest of results here, it would go a massive way to assuaging the negativity pervading the Pakistan camp throughout this tour.