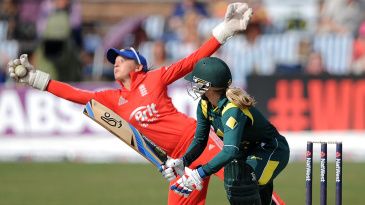 In August 2013, in an ODI against Australia at Hove, Sarah Taylor took what is still one of the best catches behind the stumps ever seen in international cricket, men’s or women’s – diving at full stretch to her left, after anticipating in a split second Jodie Fields’ reverse sweep. The bowler, Dani Hazell, and the umpire, Ian Gould, could scarcely believe what they had just seen. The clip of the catch, posted on Twitter, instantly went viral on social media. That might not seem unusual today, but for the women’s game six years ago it was an incredibly rare occurrence.

That catch and its aftermath sums up what Taylor – who a week ago announced her retirement from international cricket – has brought to the women’s game. In a career spanning 13 years, which began in a different era – 2006 – her incredible keeping skills transcended the normal reach of the women’s game, winning over many sceptics who did not previously believe that it was worthy of their attention. Last year Adam Gilchrist famously tweeted that Taylor was the best wicketkeeper in the world, male or female: those social media clips had done their job yet again.

It is a reflection of the state of cricket reporting in the twenty-first century that Taylor often grabbed headlines for her apparent ability to transition freely into the men’s game. In October 2015 she became the first woman to play men’s grade cricket in Australia; two and a half years earlier, a story about the possibility of her playing in the Sussex men’s second XI made the front page of The Guardian. Mike Selvey’s tribute to Taylor at the Cricket Writers’ Club lunch on Tuesday summed up the situation: “she is the greatest female cricketer of all time,” he said, “because she is the only one who could have held her own in the men’s game”. This was obviously meant as the ultimate compliment. Perhaps, though, the question we as journalists should be asking ourselves is why her world-class performances in the women’s game did not garner the same levels of attention or prestige.

The incredible thing is that the majority of Taylor’s international career – 158 of her 226 England appearances – took place at a time when central contracts did not exist for the England side. She did not have hours of top-level specialist coaching to hone her skills, either behind the stumps or in front of them. With Taylor it was all about natural talent, and the sheer insouciance at being able to pull off incredible feats while barely turning a hair. With the bat, she broke records at the start and end of her career: she retires having been part of England’s two highest partnerships ever in international cricket, putting on 268 for the first wicket against South Africa at Lord’s in 2008, and 275 for the second against the same opposition during the 2017 World Cup. The sweetness of her cover drive will remain long in the memory.

Even amidst difficult summers like the one which England Women have just experienced, when for the first time ever her automatic place in the starting XI came under scrutiny, she continued to provide social media fodder by pulling off a succession of leg-side stumpings, often standing up to the stumps – and, until the rules made wearing one compulsory, without a helmet – against the likes of Katherine Brunt or Anya Shrubsole. Her ability to make such a feat seem so commonplace meant that it was easy to take it for granted: in fact there are few other keepers in the history of the women’s (or men’s) game who would even attempt it. Unsurprisingly, nobody in women’s cricket has ever effected more dismissals than Taylor’s 232.

The scrutiny on Taylor for the whole of her career, as the only household name in the side bar Charlotte Edwards, was at times immense. She took her first break from international cricket in 2010, spending time travelling in New Zealand, before returning the following year. Her performance at the 2013 World Cup in India, just days after the story about her playing for Sussex seconds had broken and with the eyes of the world looking on, included three consecutive ducks. As it turned out, below the insouciance lay something few had suspected: an anxiety disorder so crippling that in 2016 she found herself forced to take a second, 10-month break from cricket, unable to leave the house. Her subsequent bravery in speaking out about her condition has meant her legacy will extend far beyond just cricket, helping countless others who suffer similarly.

It is to the ECB’s credit that she felt well enough supported to return to international cricket at all: coach Mark Robinson was there for her every step of the way, allowing her the option to sit out of certain tours or legs of tours, thus ensuring that she remained playing long enough to collect a World Cup winner’s medal (the third global title of her career) in front of a home crowd at Lord’s in 2017. Ironically Robinson’s parting of ways with the ECB six weeks ago may well have hastened Taylor’s decision to remove herself from the fray.

It is an understatement to say that Taylor will be missed – by the fans, no doubt, but also by England. Their reserve keeper, Amy Jones, will now make the step up as the permanent first choice behind the stumps; beyond that their options for reserves are scarce. Tammy Beaumont has not kept regularly even in domestic cricket for several years, and the only keeper remaining in the Academy, after Ellie Threlkeld was dispensed with last year, is 18-year-old Rhianna Southby, widely thought to be too young as yet to make the step up to full England duty.

For Taylor, though, this is the right time to go: her health must come first. “This has been a tough decision but I know it’s the right one, for me and for my health moving forward,” she said in the press release that accompanied her retirement. “I can’t thank my team-mates enough, both past and present, and the ECB for being supporters and friends along my journey.” Someone who has given us all so much joy should surely be allowed to bow out of the game when it no longer brings her that same enjoyment.

How should we as cricket fans reflect on Taylor’s career? One small request, if I may: let’s not valorise her as someone who almost, but not quite, “made it” in men’s cricket. Instead, let’s remember her as a player who was a superstar in her own right, and who along the way took our sport to new heights.