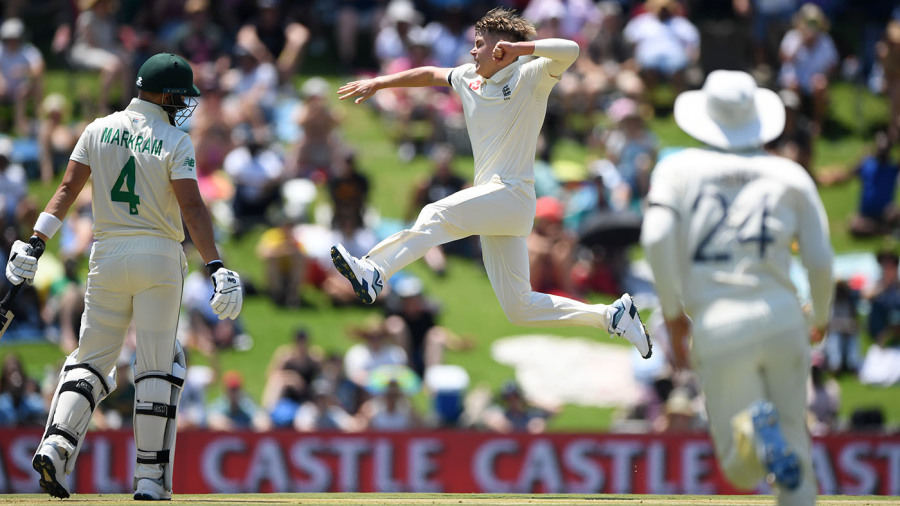 Peaky bowlers and some blind resistance, Sam Curran defied both to capture four wickets and lead England into a comfortable position at the close of play on the opening day of the first Test against South Africa at Centurion, despite the clear discomfort of several of his team-mates on and off the pitch.

With Stuart Broad toiling gallantly, though still showing some signs of fatigue after being bedridden for days with the illness that has swept through the England camp, Jofra Archer well below his best having suffered from the same bug and Ben Stokes spending a large chunk of time off the field feeling unwell after tea, Curran took charge of the tourists’ five-pronged pace attack after Joe Root had won the toss and sent the hosts in.

Curran’s haul of 4 for 57 from 19 overs included the important wicket of Quinton de Kock, who appeared almost oblivious to his side’s plight when he came in with South Africa floundering at 97 for 4 and raced to a 45-ball fifty. But, just as his century came into sight, de Kock was tempted by a Curran ball of impeccable length and with a hint of movement, edging to keeper Jos Buttler to be out for 95 off 128 deliveries.

Curran had also broken up an 87-run partnership for the sixth wicket between de Kock and debutant Dwaine Pretorius when he had the latter caught by Root at first slip for 33 off 45.

Earlier it looked like James Anderson – playing his 150th Test – might have slotted seamlessly back into his role as England spearhead after five months out with a calf injury when he had opener Dean Elgar out to a leg-side strangle on the first ball of this four-Test series. But a period of frustration followed as Anderson and Broad struggled to make further inroads.

Curran came on at first change, however, and after seeing his initial delivery pounded through the covers for four by Aiden Markram and an edge off the same batsman fall just short of slip two balls later, he had Markram out to an errant shot, chipping straight to Jonny Bairstow at midwicket.

More frustration followed for England’s bowlers with Faf du Plessis and Zubayr Hamza posing a threat before a timely breakthrough from Broad sent Hamza on his way, caught at second slip by Stokes for 39.

When Curran had South Africa’s other debutant, Rassie van der Dussen for just 6 off 34 balls with a clever delivery angled across the right-hander and landing safely in the mits of Root at first slip via an edge, they could take some encouragement from producing a much-needed wicket in difficult circumstances.

England consolidated when Broad had du Plessis caught by Root for 29, but that was the cue for de Kock and Pretorius to mount their resistance.

De Kock struck three boundaries in five balls off Curran from the first nine deliveries he faced. His 18th Test fifty included nine fours and meant he had made six 50+ scores in eight Test innings at home this year.

De Kock’s innings was not without a nervous moment – or two, both off Root. He sent a Root delivery high into the air over the bowlers head, but it dropped just short of Anderson as he and Archer ran in from mid-off and mid-on when the batsman was not out 24. Then, on 35, de Kock edged Root to slip, where Stokes was unsure whether it had carried to him. With umpire Chris Gaffaney suggesting it hadn’t, the soft signal of not out stood.

Once Curran had dismissed both, Archer chimed in with the wicket of Keshav Maharaj, a lean return on a tough day. England remained without the bowling services of Stokes, who returned to the field after spending time in the shade attempting to rehydrate. When Broad removed Kagiso Rabada in his second over with the second new ball, and on the last delivery of the day, he looked thrilled – and exhausted.

“That was very nice,” Curran told Sky Sports of Broad’s last wicket, which gave him 3 for 52 off 17.4 overs. “Rooty wanted that two or three overs with the new ball to try and strike. It was tough work but I thought we stuck at it pretty well.”

On de Kock, Curran said: “You watch him in one-day cricket, he just plays his shots. In Tests he plays his natural game. Fair play to him, he played his way and he got to a good score.”