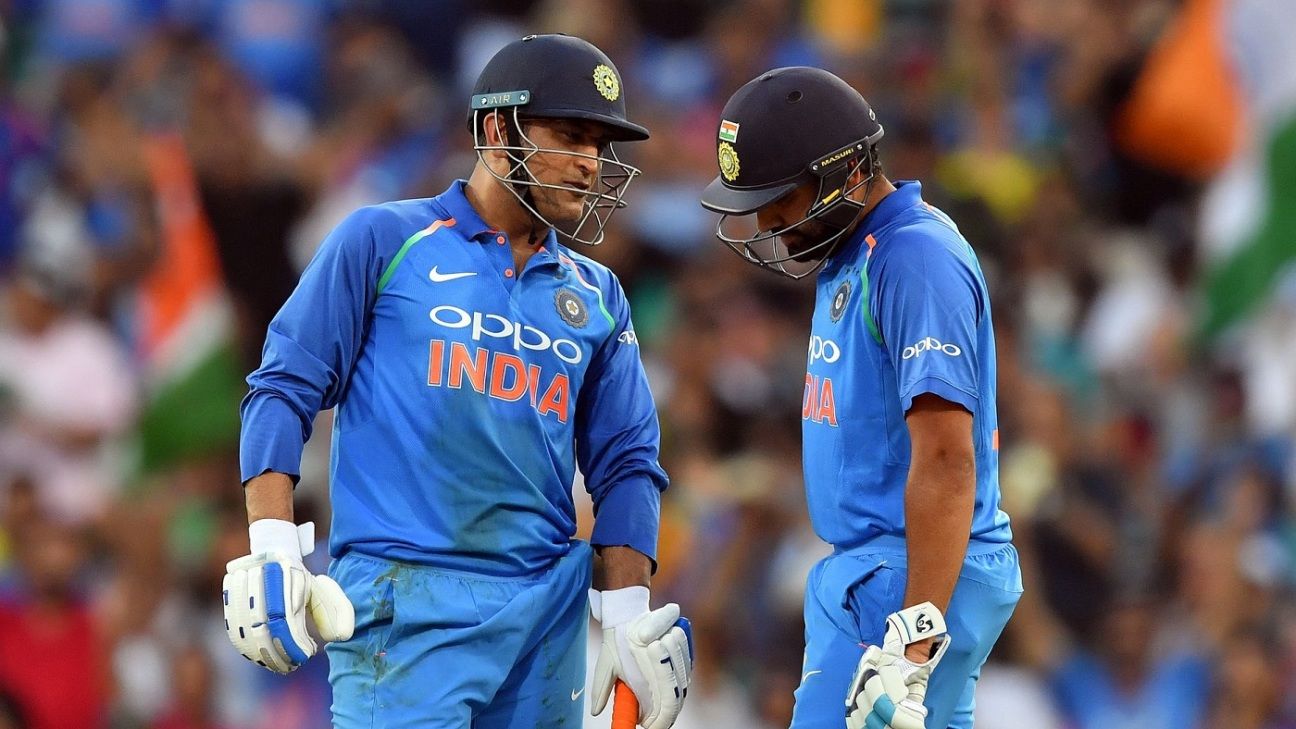 India’s ODI vice-captain Rohit Sharma believes No. 4 is the “ideal” position for MS Dhoni as India continue to jostle with their middle-order combinations ahead of the World Cup.

Dhoni made 51 off 96 balls in the first ODI against Australia at the SCG. He added 137 in 28 overs with Rohit to repair the early damage after India were 3 for 4, but it was an innings that could again divide opinion on Dhoni’s diminishing strike rates at the twilight of his career.

As such, his form has prompted much debate following a lean 2018 where he averaged 25 with a strike-rate of 71.42, without a half-century in 13 innings. These returns were comfortably his lowest in any year since his ODI debut in December 2004. However, there is little doubt over his place in India’s 15-member World Cup squad.

Ambati Rayudu, who was lbw for a second-ball duck in India’s chase, is the incumbent No. 4 and averages 45.72 in the position, but Rohit would be pleased to see Dhoni back in the role. “Personally, I always feel him batting at No. 4 will be ideal for the team,” Rohit said. “Rayudu has done really well now at No. 4, so it totally depends what the captain and coach thinks about it. Personally asking, yes, I would be happy if he [Dhoni] bats at No. 4.”

It is a move unlikely to happen given the backing Rayudu has had from the captain and team management. “We believe that Rayudu is the right person to capitalise because he’s experienced and he has won many games for his state and in IPL cricket,” Virat Kohli said before the ODI series against West Indies late last year. “He has a great one-day record already for India, so I think the batting order is sorted as far as we’re concerned.”

In the half-century at the SCG, his first since making 65 against Sri Lanka in December 2017, Dhoni faced 63 dot balls out of his 96 deliveries. However, Rohit and Dhoni knew they were India’s last chance of making the chase a contest after Jason Behrendorff and Jhye Richardson ran through the top order inside four overs.

“When he came out to bat today (Saturday), we’d already lost three wickets, the guys were bowling pretty well and we had to respect that spell,” Rohit said. “We took a little bit of time, even myself, I took some time and didn’t score as quickly as I normally do. At that point losing another wicket the game would have been dead, so we wanted to make sure we take the game forward so we had to play dot balls. “It’s a good sign for us that he [Dhoni] showed he can come out and bat whenever the team wants him to bat.”

Dhoni brought up his half-century with a crunching on-drive. At that point, India needed just over eight an over with 18 overs left and seven wickets in hand. Then Dhoni was given lbw to Behrendorff to a delivery pitching well outside le, but there were no reviews left after Rayudu had used up one.

Rohit rued not having the challenge up their sleeve to save Dhoni, but said it was tough when decisions had to be made quickly. “It’s always tricky, when to take it and when not. Rayudu thought the ball was drifting down leg and I thought the same. These things happen. You can’t always be right. But it is important to use the DRS well and we’ve spoken a lot about it. It’s such a split second decision. We might have a chat in Adelaide but what’s done is done.”

The area where Rohit thought there was more need to take notice was around losing the three early wickets that left India well behind the game. But he remained confident that they had enough depth in their lower order.

“I think it was a good learning but we’ve said that enough about learning now, it’s time to go an execute – take the pressure, absorb the pressure. International cricket is all about absorbing pressure, today was the perfect example, we were put under pressure and not able to absorb it.

“We believe in (Ravindra) Jadeja to play those cameo innings when required but the asking rate was way too much when he came to bat. For any batsman to just start playing shots is not that easy…so I don’t think it’s a worry, but it’s an eye-opener. Sometimes there will be times where No. 6, 7, 8 need to score those crucial runs but we totally believe in Jadeja to do that.”