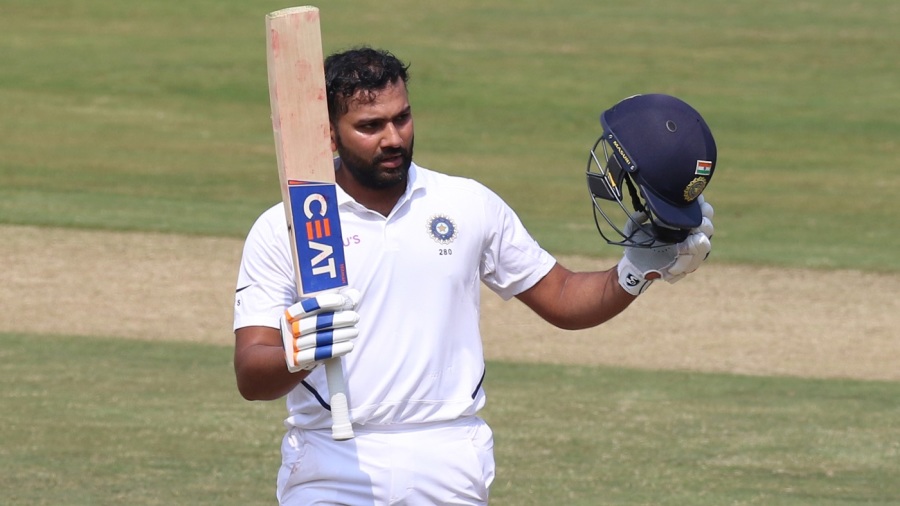 Six years after he scored a century on debut, Rohit Sharma resurrected his underwhelming Test career with a smooth and authoritative century in his first innings as an opener. In the company of Mayank Agarwal, he put together India’s 13th 200-run stand to quickly re-emphasise what a difficult assignment South Africa were on. Agarwal finished the rain-curtailed day 16 short of what could be a maiden Test hundred as, outside the first half-hour when the new hard ball moved a little, South Africa’s attack lacked penetration and discipline to put these batsmen through any sustained period of examination.

Faf du Plessis’ look at losing the toss said it all. Virat Kohli had turned to speak to the broadcasters, and du Plessis turned back to his camp with a wry, resigned look on his face. This was the eighth straight toss South Africa had lost in Asia, but it is in India specifically that you desperately want to win it. While winning the toss is no guarantee for success for visiting teams, so dominant have India been at home since 2013 that you can pretty much kiss the Test goodbye if you don’t get to do what you want at the start.

The despondence was not unfounded. The new ball moved around for about a few overs, and then the South African spinners – three of them – showed neither the skills to trouble the batsmen nor the discipline to tie them down. On a slow, dry pitch, the odd edge produced by the quicks didn’t carry, and the two batsmen quickly turned aggressive, hitting seven sixes between them, rendering the in-out fields ineffective.

There was enough discipline at the start of each session before the batsmen capitalised on weary bowlers. There will be debate around Vernon Philander‘s selection as one of the two quicks because he bowls mid-120s and doesn’t move the ball much in the air. Du Plessis called him one of the two allrounders, which suggests his batting might have got him in ahead of Lungi Ngidi. Philander, though, used his experience and Kagiso Rabada his pace to test the opening pair.

A leave sailed over the off stump, an lbw shout suffered because of extra bounce, an edge fell well short. But that was the extent of the trouble the duo went through. In the first half hour, South Africa managed to keep their control percentages down to 72 and 75, but this was not unusual, nor was the odd play and miss. As the precious little movement faded, the openers assumed control of the Test.

With little pace off the pitch, Philander was reduced to bowling with the wicketkeeper up to the stumps in his first spell itself. Rabada bowled a testing first spell of 6-3-14-0, Philander returned for a tight spell immediately after, Keshav Maharaj got off to a decent start, but all that managed to do was keep India’s run rate under three. South Africa were playing the long game well until then but they needed depth in their bowling to do so.

Dane Piedt and Senuran Muthusamy brought a visible drop in intensity and consistency, and India were quick to assert their dominance against them. Rohit hit two towering sixes down the ground in the first session, Agarwal got himself a flat one. Rabada came back for a burst before lunch, but the questions he asked now with the softer ball were not as searching as in the first spell. If Rohit was brutal against anything short of a length and good with his feet against spin, Agarwal showed a penchant for expansive cover drives, which he controlled with his wrists, much like his captain does.

Missing the consistency from their spinners, South Africa had to try and buy wickets with smart field placements. They bowled with no point or fine leg, encouraging the sweep and cut, one of which brought a top edge just before lunch. That, though, evaded square leg and brought Rohit his fifty. India ended the first session at 91 for no loss in 30 overs.

South Africa began with second session with renewed discipline. Philander bowled three overs for seven, Maharaj tied the other end up, but with Rabada not able to replicate the intensity of the morning spell, the flood gates opened. The second hour of the middle session was open season as Rohit went about hitting sixes for fun. The most incredible shot, though, was played by Agarwal, who brought up his fifty with a wristily driven six wide of long-off.

India were looking to close out the second session and then make another strong start and accelerate in the final one when the rain arrived to put paid to their plans.