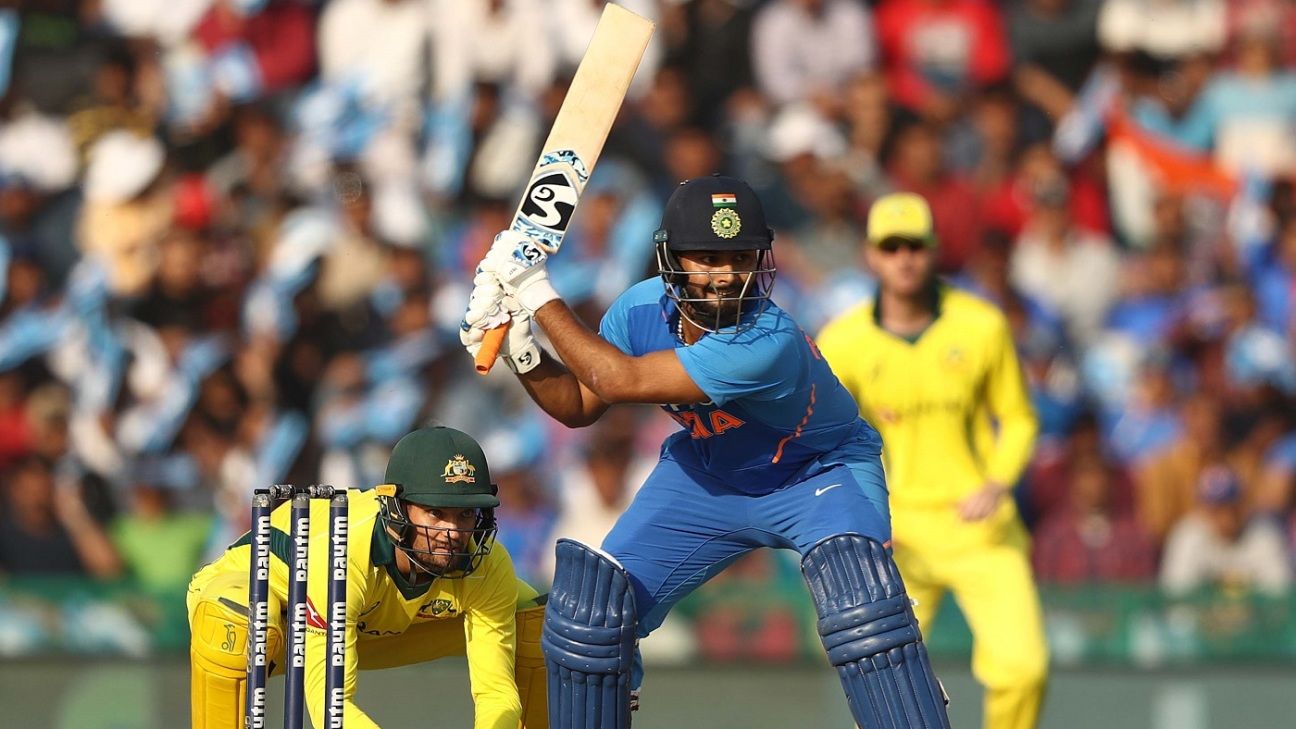 If you’re Rishabh Pant, every step you take, every stumping you miss, every run you score, every catch you take and every move you make has the potential to be scrutinised, even more so now with India in their final stretch of World Cup preparation.

Pant was handed an opportunity in the fourth ODI after MS Dhoni was rested for the final two games. He showed his boundary-clearning ability to make a 24-ball 36 – no worries as far as the batting goes – but Pant the keeper struggled to grab the ball cleanly.

His two missed stumpings – when Ashton Turner was on 38 and 41 – elicited chants of ‘Dhoni! Dhoni!’ from the Mohali crowd. A cheeky attempt to underarm flick the ball onto the stumps resulted in an overthrow.

Earlier, he had missed a more difficult stumping chance via a deflection off Peter Handscomb’s pads when left-arm wristspinner Kuldeep Yadav drew the batsman out of the crease. Handscomb was on 105 at that point. He added 12 more to his tally before being dismissed, but Turner made India pay dearly, blasting 84 off 43 balls to tip the chase of 359 Australia’s way.

Clearly, it wasn’t his night. Turner announced himself in style, in just his second ODI, to win the match and give Australia World Cup selection headaches. What about Pant, who is also trying to make that flight to the UK?

It can be intimidating for a 21-year old, but Pant is now into his third year as an international cricket. Having become an IPL name and a Test regular, these must not be new for him, but there’s no doubt the spotlight will be on his wicketkeeping. However, both Shikhar Dhawan and bowling coach Bharat Arun defended Pant’s wicketkeeping ability.

Not too long ago, Dinesh Karthik was India’s finisher and he even said that this version of him relished batting under pressure. In the past two years in ODIs, Karthik has been unbeaten in seven out of ten matches India have won while chasing. Only Joe Root (nine), Virat Kohli (eight) and Dhoni (eight) have been better in this period.

While Karthik has had a fairly extended run since the Champions Trophy – he had played 17 ODI innings – Pant has got only three innings in this period. Yet, he’s been deemed good enough to earn a Category A central contract, the the second-most lucrative retainer. The team management is impressed with his six-hitting ability and is prepared to be patient despite his limitations as a wicketkeeper and outfielder.

The reason why they’re heavily invested in him is for the six-hitting prowess he brings to the middle order, a factor that could be crucial if Hardik Pandya isn’t available. But now, he’ll return to his home ground with the series on his line.Among the existing options, Vijay Shankar doesn’t bring such raw power: he is more a technically correct batsman who provides a few tight overs with the ball. Can Pant capitalise?

Virat Kohli insists the IPL will have no impact on World Cup selection, effectively meaning Wednesday presents Pant one last chance before the World Cup. Karthik has already shown the management what he’s capable of, and by the time Pant was fumbling behind the stumps in Mohali, Karthik was having fun at his good friend and Tamil Nadu team-mate Abhinav Mukund’s wedding. Who’ll have fun at the World Cup: Karthik or Pant?