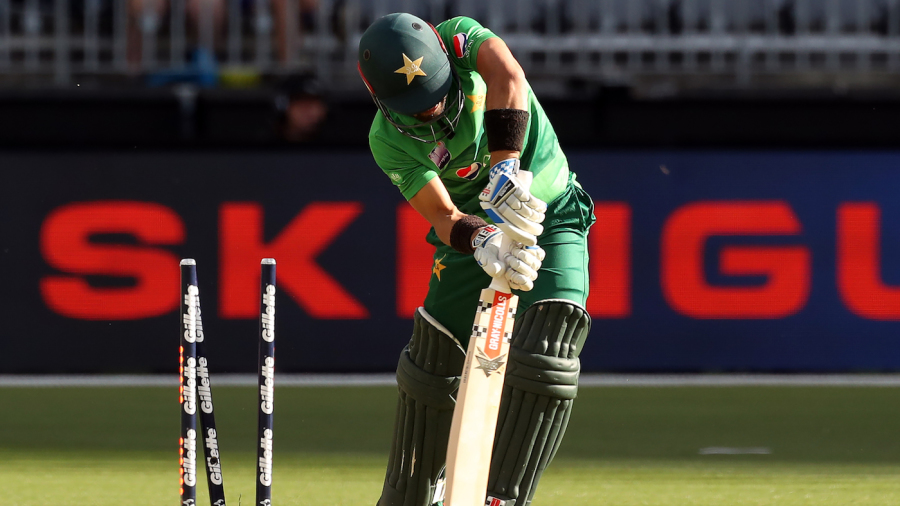 At the home of the Perth Scorchers, Australia disposed of Pakistan with a brutal efficiency reminiscent of the West Australian Big Bash League club as coached by Justin Langer, completing a run of five wins in six T20Is that was only interrupted by inconvenient Sydney rain and posed ominous signs for the opposition ahead of next year’s World Cup.

There was plenty of glee evident in the captain Aaron Finch when he was able to send the tourists in to bat on a lively Perth Stadium pitch, and Pakistan never recovered from the loss of three wickets inside their Powerplay. Mitchell Starc, Kane Richardson, the recalled Sean Abbott, Billy Stanlake and Ashton Agar covered for the rested Pat Cummins with ease, sharing wickets and responsibility for strangling the batting in an innings that featured no fewer than 26 plays and misses.

Additionally, the Australians fielded and caught with rare polish, ensuring that very few Pakistani mistakes went unpunished. A final tally of 106 was about all that can be expected of Pakistan on days when Babar Azam does not bail them out with a score, as they have fallen into a deep T20I hole that had also seen them whitewashed at home by Sri Lanka prior to this one.

Finch and Warner had very little pressure on them as they charged to victory in a fashion that ensured the series would end with the openers being the only members of the Australian batting order to visit the crease more than once each. The vice-captain, Alex Carey, was not required to bat at any stage against Pakistan or Sri Lanka – he will hope for more of a hit when he dons the creams to lead Australia A against the Pakistanis from Monday at the same venue.

The Australians included Abbott for his first international in five years, and also recalled Stanlake at the expense of Adam Zampa in expectation of a bouncy pitch. Pakistan selected two debutants, Khushdil Shah and Muhammad Musa coming into the team, alongside Mohammad Hasnain and Imam ul Haq.

Imam’s inclusion at the top was another attempt to find some support for Babar, and for the first couple of overs the pair looked to be finding their feet. Starc, however, was able to generate some swing in his second over, enough to find Babar’s front pad and win a debatable lbw verdict from the umpire Paul Wilson, confirmed after a long delay waiting for ball-tracking in the wake of the Pakistan captain’s review.

Having claimed the most vital wicket of all, Starc improved on the delivery at his next attempt, splaying the stumps of Mohammad Rizwan who was nowhere near the late curl of the ball with his attempted drive. When Imam miscued Abbott, who hit the pitch hard in keeping with Australia’s plans to make the most of Perth’s vast square boundaries, the Pakistan innings was once again wobbling before it had the chance to stand.

A brief recovery from Iftikhar, playing his second substantial innings in as many matches, was offset when a frustrated Haris Sohail failed to reach the pitch of Agar, who would complete a superb stint for the national team having conceded just three boundaries in six games, to lob a catch to long-off. Richardson then took his turn to strangle the remainder of the innings, as Starc and then Agar each claimed expert outfield catches.

Finch was a happy man when he claimed the eighth and final wicket of an innings that petered out into the lowest of the series, and his juggle to take it was just about the Australians’ only near-misstep of an otherwise immaculate display in the field.

With the bounce and occasional swing on offer, Finch and Warner were never going to advance on their meagre target entirely without risk, and in the first over Warner edged barely over the head of third man for six in a similar manner to the way Travis Head had twice been dismissed in last summer’s Test against India. Finch also cleared the rope with a hook shot that was more edge than middle, but the modesty of the chase and the confidence growing within the Australian side were soon apparent.

Finch signalled as much with a brutal pull shot from Hasnain that cleared the backward square leg rope, some 84 metres away, despite the lurking presence of an outfielder for the shot. Australia’s Powerplay was worth 56 after Warner, riding in Finch’s early slipstream as is becoming increasingly customary, burst into life with a precise straight drive then a controlled hook off the bowling of Mohammad Amir.

The winning runs arrived with all of 49 balls to spare, as Finch lifted a drive over wide mid-off and away to the boundary to complete eight wins from eight for the national team and an unbeaten calendar year in the format. Clinical and precise, calm and clear, Finch’s team now have a very sturdy template for winning next year’s T20 World Cup on home soil.