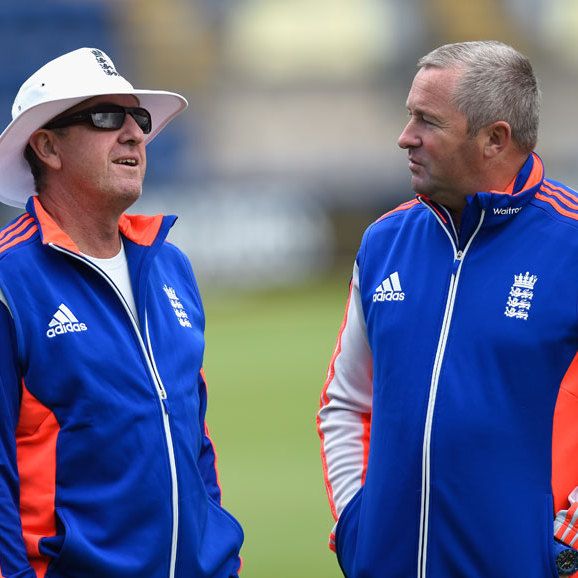 Trevor Bayliss and Paul Farbrace look set to be reunited within months.

Farbrace broke up one of the longest-standing partnerships in cricket when he left his role as England’s assistant coach on Tuesday to become Director of Sport at Warwickshire. Previously the pair have coached Sri Lanka and England together.

While Bayliss remains England’s head coach until the conclusion of the Ashes in September, it has emerged that the pair have held informal talks about the possibility of joining forces at the Birmingham-based team for The Hundred.

“It’s no surprise really, is it?” Farbrace told ESPNcricinfo. “We’ve worked together for a long time. It’s quite an easy equation to add up that we might end up working together. Trevor is someone we’d be keen to chat to.

“He has good experience of the IPL and the Big Bash, and when you start a new tournament you want someone with experience and someone with ideas of how to put a team together in a very short space of time. He would be a very strong candidate.”

Bayliss has previously said that, while he does not envisage taking on any more full-time coaching roles in the future, he is keen to explore opportunities in franchise cricket which do not require quite as much time away from home. He is already understood to have some sort of loose agreement to reunite with Sydney Sixes (with whom he won the BBL and the Champions League) and Kolkata Knight Riders (with whom he twice won the IPL) once his England contract finishes and has made no secret of his desire to work in The Hundred, too. He lived quite near Birmingham – in Stratford-upon-Avon – during his spell as England head coach.

“Of the four years he’s been in England, the only time he lived anywhere was in Stratford, so he knows the area pretty well,” Farbrace continued. “His son played league cricket around here.

“He’s not the only one [we’re considering]. There are other people you’d definitely be looking at. But Trevor is definitely a name that will be on the list.”

The final decision will be up to the CEOs of the counties uniting to form the Birmingham team: Matt Rawnsley for Worcestershire and Neil Snowball for Warwickshire. Snowball did admit, however, that discussions were underway. “We may have had a chat,” he said with a smile when asked whether he had made contact with Bayliss. In an ideal world, he admitted he would like an appointment ahead of the draft – planned for October – to ensure the head coach’s participation.

Snowball also confirmed that, contrary to initial indications, team names for The Hundred could include geographical references. In this case, that means the word ‘Birmingham’ is almost certain to feature in the team name. “Worcestershire and the ECB seem relaxed about that,” Snowball said. Warwickshire’s T20 team has carried the name Birmingham Bears for several years.

While some Worcestershire supporters may see that – and the fact that it appears Moeen Ali, who has already held talks with Farbrace about The Hundred, is certain to represent Birmingham – as a concern, Farbrace insists it will also offer opportunity. Among other things, he believes the respective head coaches at the counties – Jim Troughton (Warwickshire) and Alex Gidman (Worcestershire) – will benefit from working as Bayliss’ assistants during the tournament.

“Inevitably the big clubs – the grounds with the international stadiums – will always have a slight advantage over everyone else,” he said. “Players and coaches want to work at the best places with the best facilities and any coach wants to work with the best coaches and vice-versa. You’ve always got that as a slight pull.

“But it’s an opportunity for all the clubs involved to grow their coaches. Maybe I’m naive but I don’t think there’s going to be too much concern about tapping players up. It’s an opportunity to get the best playing the best.”

One man Farbrace will have to do without, for the opening weeks of the season at least, is Ian Bell. Bell had to return home early from the PSL after sustaining a ligament injury that means one of his toes keeps fracturing. He has now undergone an operation that is expected to provide a complete cure, but he is not anticipated to return until early June. As a result, he is expected to miss Warwickshire’s first four Championship matches as well as all their group games in the One-Day Cup.

It does his slim hopes of an Ashes recall no good. While he was expecting to hold a meeting with Ed Smith, the national selector, in the coming days to discuss his chances of returning to the England Test side, it was in the understanding that he would need to score heavily in the early weeks of the Championship season. He will probably now have just five Championship games – from the start of June until the start of August – in which to press his case.

Meanwhile, a planning application for extensive building work alongside the perimeter of the Edgbaston ground was approved by Birmingham City Council on Thursday. The plans include 400 new flats in a development that will, at its peak, reach as high as 17 storeys, as well as retail and leisure facilities (which Warwickshire have the option of managing) at ground-floor level. Work is expected to start when the cricket season finishes. The land was sold as part of the enabling plan that allowed Warwickshire to redevelop their ground a few years ago. The next phase of that redevelopment is likely to see a hotel built in the area which is currently occupied by the Raglan and Priory stands.

Snowball also confirmed that, in 2020, Warwickshire expect to host most of their One-Day Cup games at their second ground in Portland Road. While the club were obliged to ask Worcestershire to host one Championship game this year, they are confident facilities for players and spectators at Portland Road will be ready for 2020.