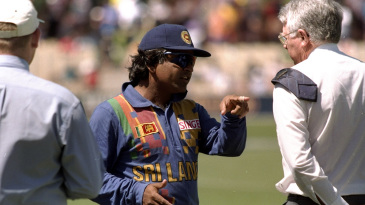 Once again, all eyes were on Muttiah Muralitharan. Just as they had been at the beginning of a foul-tempered and engrossing contest, and again during a seminal mid-innings stand-off – one in which Adelaide witnessed scenes of mutiny seldom seen on a cricket field since the Bodyline series reached its boiling point at this same venue in January 1933.

But this time, for Muralitharan, it was with a bat in hand. With men camped all around him, with the scores tied, and with just his wicket remaining if Sri Lanka were to pull off a victory that – even allowing for their seminal triumph at the 1996 World Cup – would count as one of their most hard-fought and cathartic of all time.