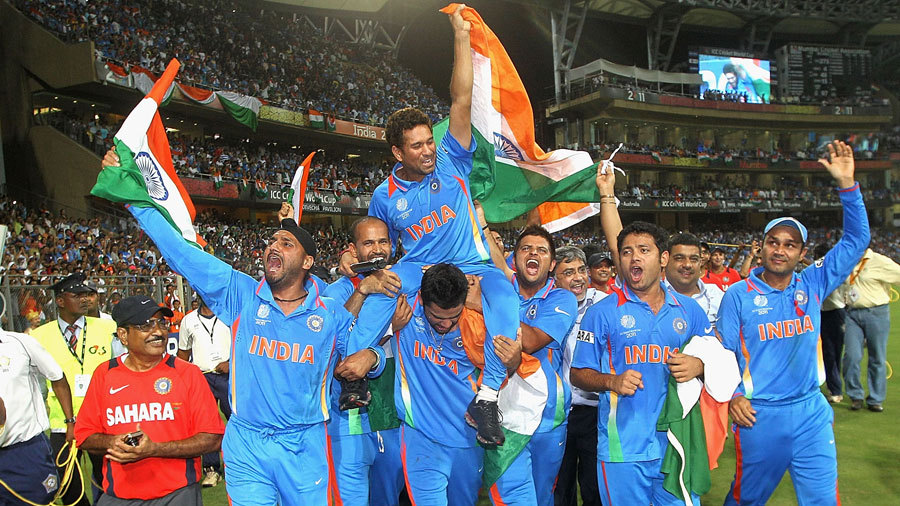 Twenty-eight years on from the match that transformed the history of world cricket, India recaptured the crown that Kapil Dev and his men first lifted at Lord’s in 1983, and this time they did so in their very own back yard. An iron-willed 97 from Gautam Gambhir was matched for intensity by the finest captain’s innings since Ricky Ponting in Johannesburg eight years ago, as MS Dhoni trumped a poetic century from Mahela Jayawardene to pull off the highest run-chase ever achieved in a World Cup final.

Against a triumphant backdrop at the Wankhede Stadium, victory was sealed by six wickets with 10 balls to spare, as Dhoni – who had promoted himself to No. 5 to heap extra lashings of responsibility onto his own shoulders – rushed through the gears as the victory target drew nearer. With 15 required from 17 balls, he flicked Sri Lanka’s only true threat, Lasith Malinga, through midwicket for consecutive boundaries, before smoking Nuwan Kulasekara over long-on to finish on 91 not out from 79 balls, and spark the most delirious scenes of celebration ever seen on the subcontinent.

However, the final margin did little justice to the tussle that had preceded it. Even the toss ended up being disputed, as Kumar Sangakkara’s initial call was drowned out by the crowd, but it was the ebb and flow of Zaheer Khan’s day that epitomised the fluctuations of a compelling contest. Zaheer opened his account with three consecutive maidens and the scalp of Upul Tharanga in a peerless spell of 5-3-6-1, only to be clobbered for 17 and 18 runs in his ninth and tenth overs, as Sri Lanka monstered 63 runs in the batting Powerplay to post an imposing 274 for 6.

And India’s day got much worse before the team’s fortunes began to inch upwards. Virender Sehwag had hit a boundary from the first ball of six of India’s previous eight innings in the tournament, but this time Malinga’s slingers dealt him a second-ball duck, as he skidded a full delivery into his back pad. And then Sachin Tendulkar, for whom the script had seemingly been written, was drawn into a loose drive by a fast Malinga outswinger, having set the stadium on standby for instant history with 18 sumptuously accumulated runs from his first 12 deliveries.

At 31 for 2 in the seventh over, India were struggling to keep their toehold in the contest, and it was all too much for a faithless few in the crowd who turned their backs and set off for home. But Gambhir and Virat Kohli epitomise a generation that does not easily accept defeat, and their third-wicket stand of 83 laid the foundations for an epic turnaround. The prospect of a seam-friendly surface, allied to the grievous loss of Angelo Mathews to a thigh strain, had tempted Sri Lanka into four key changes to the team that had triumphed over New Zealand in Colombo, and with Muttiah Muralitharan lacking bite in the final wicketless appearance of his 19-year career, Malinga alone could not carry the day.

The hard-hitting of Kulasekara and Thisara Perera had been instrumental in hoisting Sri Lanka’s total to such heights, but in their primary role as front-line seamers they lacked menace and were all too easy to squeeze as 119 runs came from their combined allocation of 17.2 overs. The newcomer to the squad, Suraj Randiv, caused a moment of alarm with his high-kicking offspin when Gambhir, on 30, was dropped by a diving Kulasekara at long-off, but as the innings progressed, his lack of guile proved costly. The decision to omit both Ajantha Mendis and Rangana Herath, whose combined efforts had been so effective against England and New Zealand, is one that will haunt Sri Lanka for years to come.

But this was a victory that still had to be grasped, and India found the men who were willing to do so. The 22-year-old Kohli, who was greeted with a stern word of encouragement as he replaced the outgoing Tendulkar, showed all the mettle for the big occasion as he eased along to 35 from 49 balls before falling to an outstanding return catch by Tillakaratne Dilshan, who dived full-length across the crease to intercept a leading edge. But it was Gambhir and Dhoni to whom the ultimate duty fell. Their 109-run stand was the highest by an Indian pairing in three World Cup final appearances, and even when Gambhir gave away the chance for an unforgettable century with a tired charge and slash at Perera, the result was no longer in doubt.

Gambhir struck nine fours in a 122-ball statement of indomitability, and both he and Dhoni required treatment for stiff backs as the sapping Mumbai heat took its toll. Dhoni at one stage looked so immobile that a precautionary retirement seemed the only logical response, but after some harsh work from the physio he resumed his stance and responded with another trademark filleting of the extra cover boundary, an area in which he scored six of his eight fours – three of which helped to blunt Murali’s attacking instincts.

Both teams contained numerous veterans of World Cup final defeat, with no fewer than five Indians still remaining from the team that lost to Australia back in 2003, and as a consequence this was a match thick with performances that spoke of the wisdom of experience. Though each of the previous five centurions in finals had gone on to lift the trophy, as well as seven of the nine teams that had had the chance to bat first, Jayawardene had the misfortune to become an exception to both rules. His stunning 103 not out from 88 balls was proof that finesse has as much of a place at this level as brutality, but ultimately it was not enough to deny India their destiny.

Four years ago at Sabina Park, Jayawardene produced a supreme century against New Zealand to carry his side to their second World Cup final, but this was an innings of even more exquisite application. He came to the crease with his side under the cosh at 60 for 2 in the 17th over, having been throttled by Zaheer’s supreme new-ball spell. But he responded with a tempo that scarcely wavered from a run a ball, until with Kulasekara for company, he opened his shoulders to power through to his hundred from 84 balls.

For an occasion of this magnitude, cool heads were the order of the day, and though his final figures did not show it, no-one was cooler in the opening exchanges than Zaheer. On his watch, Sri Lanka were limited to 31 for 1 in their mandatory Powerplay, their lowest ten-over score of the tournament, and the hapless Tharanga was restricted to two runs from 20 balls before snicking to Sehwag at slip, whose sharp low take epitomised a fielding effort that was rarely less than totally committed. Then, when he returned in the 37th over, Zaheer deceived Chamara Kapugedera with a beautiful slower ball that was driven to short cover, on route to equalling Shahid Afridi as the tournament’s leading wicket-taker, with 21.

And yet, the speed with which his figures were vandalised was astounding. Though each of Jayawardene’s 13 fours was a classy stroke in its own right, none was better than the last of them, an inside-out cover-drive to one of Zaheer’s trademark outswinging yorkers, as he premeditated the late movement and filleted the ring of fielders on the off-side. The outright acceleration came from the other end, however, where Kulasekara made 32 from 30 balls before his sacrificial run-out led to a pat of gratitude from Jayawardene as they parted. And then, by the time Perera, who made 22 from nine balls, had sealed his onslaught with a dismissive thump for six over midwicket, the decibel levels in the Wankhede had plummeted.

But run by run, over by over, minute by minute, India picked themselves up, dusted themselves down, and turned the screw on Sri Lanka with a determination that a lesser group of men could not have begun to muster, amid the sure knowledge that several billion countrymen were investing all their hopes in their actions. And though he himself played just a walk-on part in the wider drama, it was Tendulkar who was chaired from the field as the celebrations began in earnest. “He’s carried the burden of our nation for 21 years,” said the youngster Kohli. “It was time to carry him on our shoulders today.”