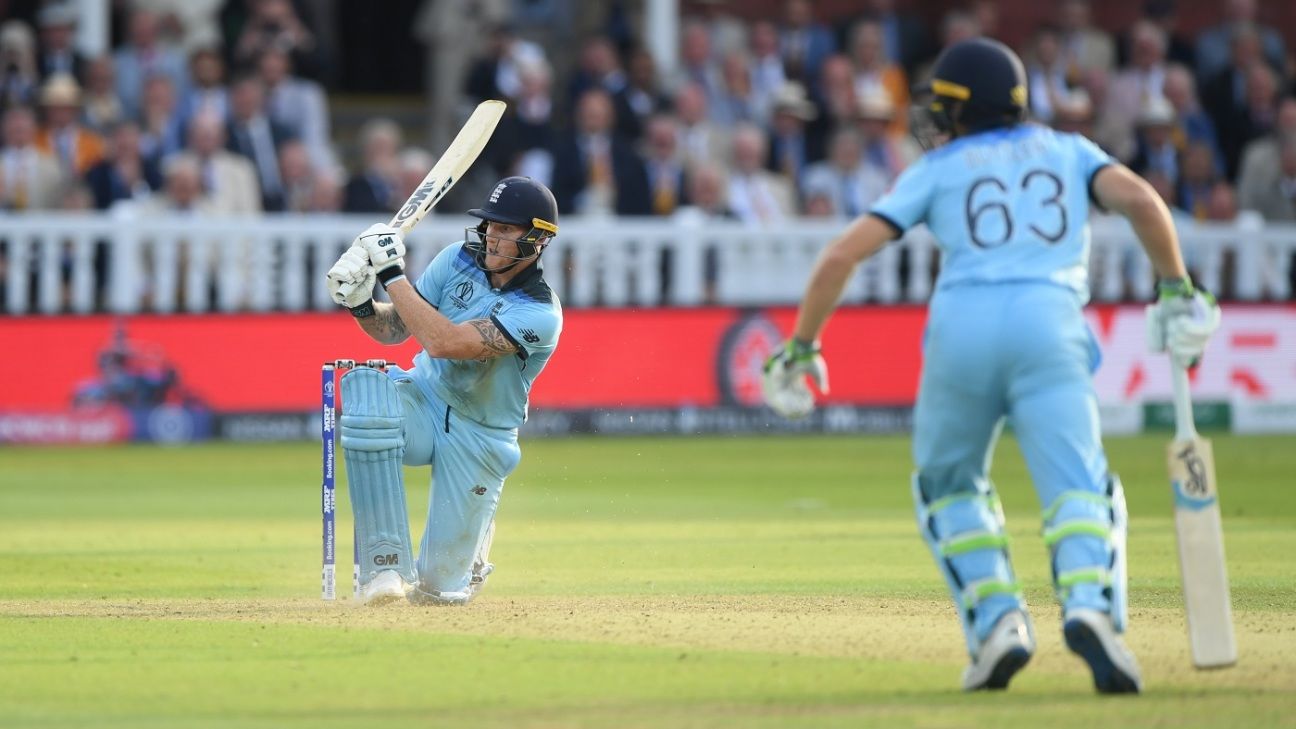 Ben Stokes has said that redemption “is not a word I’ll ever use”, in the wake of his starring role in England’s triumph in the World Cup final against New Zealand on Sunday.

Stokes was named Player of the Match in the final at Lord’s, after guiding England’s run-chase with an unbeaten 84 from 98 balls, as well as adding a crucial 8 from 3 in the decisive Super Over.

But speaking to BBC Sport, Stokes said that he did not view the events of Sunday as his public redemption, following his high-profile court case and subsequent acquittal following a fight outside a Bristol nightclub in September 2017.

However, speaking to Good Morning Britain, Stokes went into greater detail on the events of that tumultuous final, saying that his initial reaction on levelling the scores in the 50th over was “anger” at not getting the job done, before suggesting that Jason Roy ought to be Jos Buttler’s partner for the crucial Super Over.

After rescuing England’s innings in partnership with Buttler, Stokes was left needing two runs to win the match in normal time off the final ball of the 50th over, bowled by Trent Boult.

Despite being served up a knee-high full-toss, Stokes chose to play a measured shot along the ground, mindful of what had happened to Bangladesh against India in similar circumstances in the World T20 two years ago, when a succession of batsmen had taken the aerial route. Though he pushed hard to come back for the second, his partner Mark Wood was run out, leaving the scores tied.

“I was annoyed at myself, I was angry, I thought I’d thrown it away,” Stokes said. “But when I went upstairs I had to give myself five minutes because Morgs [Eoin Morgan] wanted me to go back out and do the Super Over.

“I said that we should send Jos [Buttler] and Jason [Roy] out but Morgs said we need a left [-hander] and right because it’s a small boundary.

“I had to go out the back into the shower room and give myself five minutes. I never want to be involved in one ever again.”

Stokes struck one four in the three balls that he faced in the Super Over, as England posted a challenging total of 15.

“To go out there and have the pressure on you batting first, to get as many runs as you can, it is a scary place to be especially in a World Cup final,” he said.

“But I think I’d rather be out there in the middle than having to watch because that’s the worst place to be is when you’re watching and you know you can’t influence what’s going on out in the middle.

“It’s not one of the things I ever want to be involved in again just because of the stress.”

England’s task was not finished, however. They still had to prevent New Zealand scoring 16 in their Super Over, which was fewer runs than Stokes himself had conceded in the final over of the World T20 in Kolkata, when he was struck for four consecutive sixes by West Indies’ Carlos Brathwaite.

The burden this time fell on Jofra Archer, the least experienced member of England’s World Cup squad, and Stokes admitted: “I know exactly how he would have been feeling in that moment. I just said: ‘Whatever happens here this isn’t going to define your career.’

“Obviously how he did it, it has [now] because he defended a Super Over and won England the World Cup. But I was more coming from a point of view of if it doesn’t go well, because I know what it’s like to go through things like that.”

The winning moment, replayed countless times since Sunday afternoon, came when Buttler whipped off the bails to run out Martin Guptill, and Stokes admitted that the immediate aftermath was chaotic.

“I slipped, fell over and starfished on the ground,” he said. “I had Mark Wood’s glasses on and think I broke them on the ground. It was pandemonium.

“I got emotional there at the end and that was probably the culmination of lots of things – happiness that we’d won it but maybe subconsciously thinking and remembering back to what I went through.”