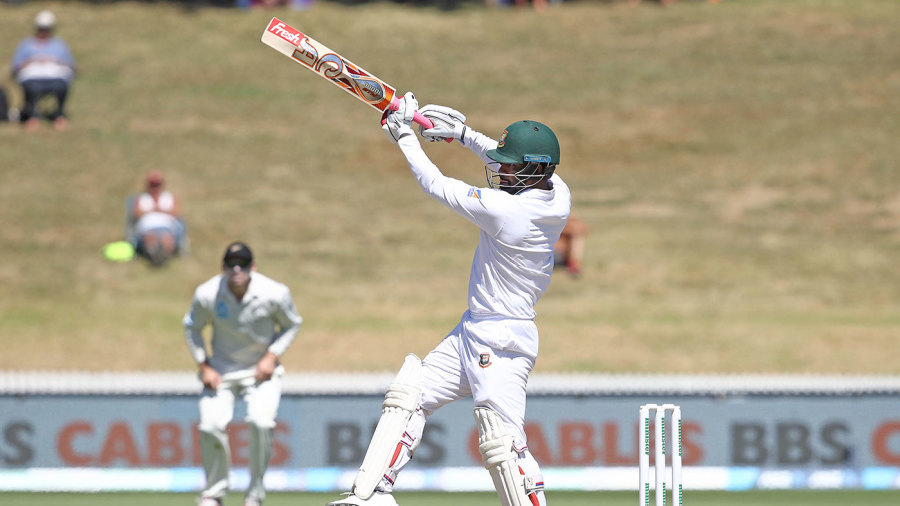 Neil Wagner upset Bangladesh’s rhythm with a trademark short ball barrage as they were bowled out for 234, after being 121 for 1 shortly before lunch on the opening day in Hamilton, undoing the good work of a blazing century from Tamim Iqbal.

Wagner finished with 5 for 47, his sixth five-wicket haul in Tests, before New Zealand consolidated their position with by reaching 86 without loss at the close. Jeet Raval, still searching for a maiden Test hundred, was unbeaten on 51 alongside Tom Latham who should have fallen in the second over as a maiden wicket for paceman Ebadat Hossain only for Soumya Sarker to drop a simple chance at second slip. Bangladesh finished the day in lethargic fashion with a number of misfields.

It had all looked so much brighter for them after being put into bat on a well-grassed surface as Tamim flayed the new ball around Seddon Park during his ninth Test hundred. He hammered 15 fours in the morning session – for a while it appeared possible he would reach a century before lunch – and brought up his hundred off 100 deliveries early in the afternoon.

However, it quickly became a lone hand as Wagner and Tim Southee shared eight wickets. Wagner’s haul began with the wicket of Mominul Haque who tickled a short ball down the leg side to wicketkeeper BJ Watling just before lunch. Soon after the break, Mohammad Mithun and Mahmudullah top edged Wagner although both shots looked avoidable in the circumstances.

Mehidy gave short leg a simple catch, also off Wagner, while Soumya Sarkar also fell to the shorter length, when he was unable to move his gloves away from a Southee delivery.

Wagner’s five-for was completed when Abu Jayed tried to ramp him and had Liton Das caught at fine leg. His short-ball approach is one of the most telegraphed in the world yet still so many teams have struggled to combat it.

Southee finished with three wickets while Trent Boult had given New Zealand their first wicket, that of Shadman Islam, who impressed against the new ball before playing across a full delivery, after he and Tamim had provided Bangladesh a fine start with a 57-run opening stand.

Tamim was the enforcer and the guiding force. He struck plenty of drives down the ground and also through the covers, while remaining steadfast against the short ball. He struck 21 fours and a six in his 126 off 128 balls, lasting just over three hours in which Bangladesh looked in better control.

Unlike some of his team-mates, for the majority of his innings he wasn’t reckless. Knowing full well that being adventurous may cost his side heavily, he curbed his strokeplay to get to lunch first before branching out again either side of his century which included taking 14 off Southee in the space of four deliveries.

New Zealand tried to pray on his attacking instincts, pitching the ball well outside off, and the plan worked when Tamin cut a short, wide delivery from Colin de Grandhomme – who he had previously been keen to mow down the ground – straight to Kane Williamson at gully. Tamim threw his head back in disgust, knowing that his team needed even more from him.

With their talisman gone there wasn’t much else offered by Bangladesh although stand-in captain Mahmudullah could have provided more than the top edge to long leg having played himself in with some compact drives.

In New Zealand’s reply, Raval did most of the early scoring with his three boundaries in Ebadat’s fifth over, to dent the promising start from the debutant, before he took on the part-timer Soumya and Bangladesh’s lone spinner Mehidy Hasan Miraz. Latham, who enjoyed a prolific series against Sri Lanka earlier this season, then found his stride and pull Mehidy for six as the shadows lengthened. By the close, it already looked a tough situation for Bangladesh to recover from.