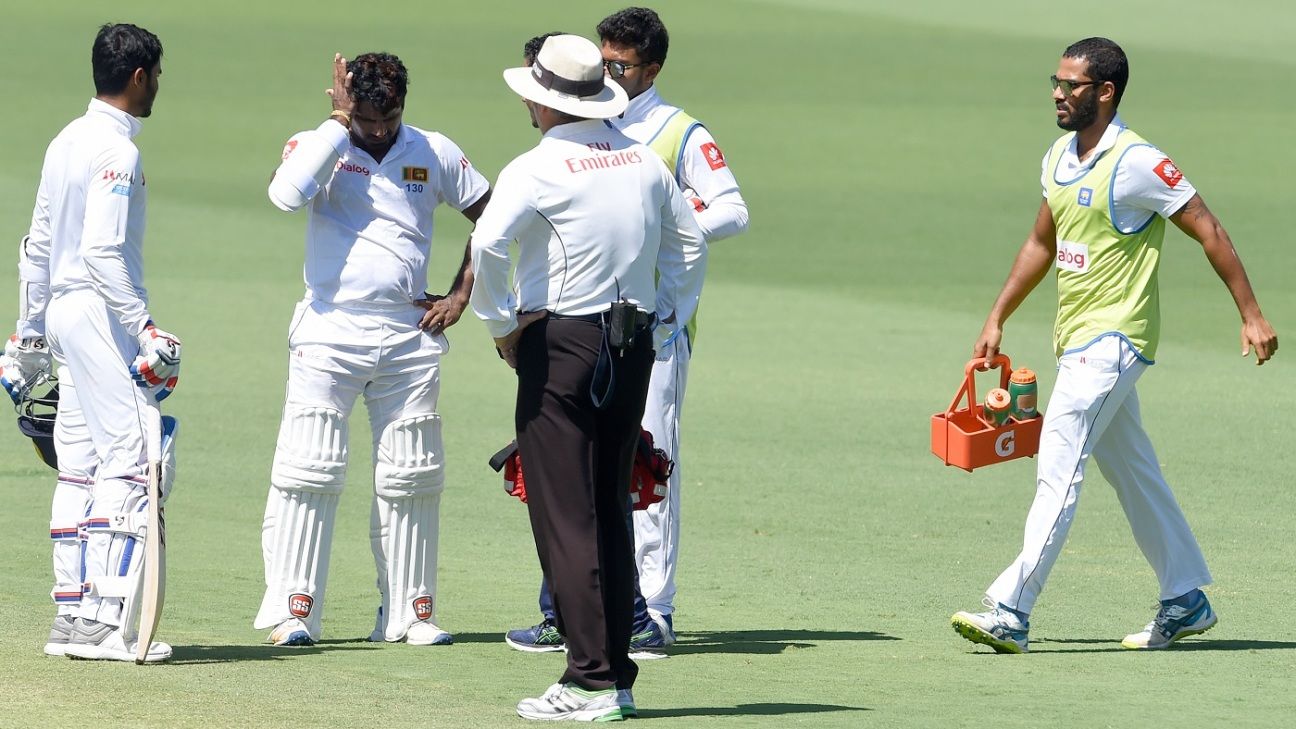 Kusal Perera will likely bat in the fourth innings at Manuka Oval, despite being forced from the field after suffering a blow to the helmet, as Sri Lanka try to salvage a positive finish and some much needed confidence ahead of their next series in South Africa.

Sri Lanka’s fast-bowling coach, Rumesh Ratnayake, was confident Kusal would be cleared to bat, after the batsman was hit on the side of the helmet as he attempted to duck under a Jhye Richardson bouncer. Kusal initially played on, but left the field in the following over. He was replaced by Dimuth Karunaratne, who had been struck on the back of the neck by a short ball from Mitchell Starc on the previous day, but was cleared to play by the Sri Lanka medical staff.

There were two other instances in the match of batsmen being hit around the head. Kusal had already been struck by Richardson earlier in the day, while a Pat Cummins short ball hit Dhananjaya de Silva on the helmet. Ratnayake later admitted it was rare to see so many incidents in one match.

The former fast bowler speaks from experience: he once forced West Indies batsman Larry Gomes to retire after striking him with a short ball in an ODI at the MCG and, most famously, broke the nose of New Zealand opening batsman, John Wright, with a ferocious bouncer during a Test in Wellington.

“When it hits the head it’s certainly a huge concern for us but this match was a lot on the head, wasn’t it?” said Ratnayake. “More so than any other game. So we would like to say it’s just one of those games but you can’t take the bowling off.

“I mean Starc, who was not even a surety of [playing] this match, bowled extremely well and he was really on fire. And so did the other two who supported him as well. It was quality bowling, you can’t just take that away. Quality bowling I felt [affected] two of our guys [getting] hit on the head.

“You can’t put it as a pattern. I mean I’ve seen bowlers hit batsmen on fast tracks also and certainly if there isn’t much pace the ducking process becomes different and the inconsistencies of a pitch – I’m not saying this pitch is inconsistent at all – it’s just sometimes you tend to duck for a ball that you shouldn’t be ducking. And that we saw in Kusal’s thing, he ducked into a ball which was not as ferocious as the ball to Karunaratne.”

Kusal was replaced at the crease by Karunaratne, who added only 13 runs to the 46 he had scored before retiring hurt, but Ratnayake praised the character shown by the batsman.

“I thought that showed a lot of guts and character from Karunaratne,” said Ratnayake. “That showed a lot for the team and we really thought that could help the morale so to speak. Those are things which we would like to talk on and hopefully the second innings we’ll sort of capitalise on that. When I say morale, [I mean] confidence.”

Since they embarked on a challenging Test tour that began in New Zealand, injuries have forced Sri Lanka to field a side with little experience and, with two Tests looming in South Africa, there is little respite in the near future. Ratnayake said Suranga Lakmal, who missed out due to a stiff back, will be fit for the first Test against South Africa later this month but Sri Lanka don’t expect to have Nuwan Pradeep, Lahiru Kumara and Dushmantha Chameera available. It places a heavy burden on the young bowlers who have been drafted in, but Ratnayake believes a strong finish to the match could provide a significant boost to their confidence.

“It’s still a learning curve because the Test isn’t finished but I’m sure they’ve learnt a lot, especially Chamika Karunaratne , who’s in his first Test.

“It was kind of a shock to him to know the standards of Test level and it just happened that he was just – I wouldn’t say he was forced into it – he was sort of taken into it in a rush but he has shown a lot of character, he’s shown a lot of confidence, he’s showed a lot of things which he did just prior to the game. It was really encouraging but I think watching the Starcs, the Cummins, all of them I think certainly helped him on and it’s a learning curve.”‘